DPMA and EUIPO to collaborate on IT systems

The German Patent and Trademark Office and the European Intellectual Property Office (EUIPO) intend to further improve cooperation in their IT systems. At a meeting at the IP Horizon 5.0 Conference (26/27 September) in Alicante (Spain), DPMA Vice-President Christine Moosbauer and EUIPO Executive Director Christian Archambeau agreed on a more intensive dialogue: At the working level, for example, IT experts from both offices will in future be able to communicate regularly in telephone or video conferences on the forthcoming data exchange topics. In addition, the heads of both authorities discussed the possibility of further cooperation on similar tasks with IT support. 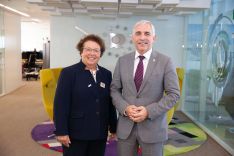 EUIPO leaders announced a cooperation project for all European IP offices in the context of the recent European trademark reform. Among other things, the project will focus on how individual entries of new trademark forms, such as sound marks, can be better found in publicly accessible databases. The DPMA, for example, is already considering this, but both offices regard uniform European standards as highly desirable in terms of user-friendliness. "We very much welcome the fact that the EUIPO wants to take the initiative and we look forward to further cooperation", said DPMA Vice-President Moosbauer.

The IP Horizon 5.0 Conference brought together top representatives of the world's leading intellectual property offices, politicians, international companies and scientists. The EUIPO and the renowned McCarthy Institute from San Francisco had invited to the event in Alicante. Topics included the impact of e-commerce and artificial intelligence on the future of intellectual property.