Munich. With a joint symposium on utility model protection, the IP authorities of Germany and China, the China National Intellectual Property Administration (CNIPA) and the German Patent and Trade Mark Office (DPMA) celebrated 40 years of cooperation.

At the event in Munich on 26 March 2019, DPMA President Cornelia Rudloff-Schäffer emphasised the importance of cooperation for the relationship between the two countries and the development of intellectual property protection in China. “The long-standing close cooperation between our two offices has also contributed to an impressive legal development in the field of intellectual property in the People’s Republic of China,” Cornelia Rudloff-Schäffer said. Over the past 40 years, it has become clear that cooperation between the two offices is “of double benefit”: for the DPMA and the CNIPA as well as for the economies of the two countries and their overall cooperation.

Head of the Directorate of Commercial and Economic Law at the Federal Ministry of Justice and Consumer Protection Dr Johannes Christian Wichard, conveyed greetings from Berlin and best wishes from the Federal Minister of Justice and Consumer Protection, Dr Katarina Barley, and thanked the CNIPA for the many years of good cooperation. The 40th anniversary of cooperation between the two offices was a cause for celebration, according to Dr Wichard. In his welcoming address, he emphasised the outstanding development of the CNIPA: The comparatively young Chinese authority had become the largest national patent office in the world within a relatively short period of time. Despite the difference in age between the two offices, the DPMA and the CNIPA were able to look back on many years of close cooperation, which would continue to gain importance.

“China on the way to becoming an innovation nation”

CNIPA Deputy Commissioner He Hua paid tribute to the “good tradition” of close cooperation with the DPMA. In his opening remarks, Deputy Commissioner He thanked the German office for its strong support in establishing and further developing the intellectual property system in his country. With the development of a friendly and cooperative relationship between China and Germany in the political, economic, scientific, technological and cultural fields, cooperation in the field of intellectual property had become an important component of intergovernmental cooperation. He Hua also referred to China’s role as Germany’s largest trading partner. Both sides were interested in a fair and transparent investment environment and in comprehensive and strict protection of intellectual property.

40 years ago, he continued, the Chinese office had “practically started from scratch”, but since then it had developed at a rapid pace. In spite of the enormous progress, it was intended to further improve intellectual property protection. It was still undergoing a phase of restructuring. China was in the process of becoming an “innovation nation” and therefore the efficient and effective protection of intellectual property was growing ever more important.

The utility model: decline in Germany, boost in China

The participants in the forum

The lectures dealt with the current situation of utility models in China and Germany. The Director General for Utility Models, Qu Shujun, CNIPA, and Bernd Maile, Head of the Directorate General Patents and Utility Models at the DPMA, presented the views of their offices.

Director General Qu presented impressive figures on the recent boost in the number of utility model applications in China: 2,072,311 applications were filed with the CNIPA in 2018. There were eleven applications per 10,000 inhabitants on average. At the end of 2018, a total of 4,403,658 utility models were effective in China, including 4,366 IP rights of German owners. Four departments with more than 900 staff were responsible at the CNIPA for examination and registration, which took about five months on average. The preliminary examination, a kind of formalities examination, was, at the request of the applicant or another interested party, followed by the preparation of an evaluation report, constituting a legal and technical examination associated with a search. The cost of one application was 500 Chinese yuan (CNY); the annual fees ranged from 600 CNY for the first three years of protection to 2,000 CNY for the ninth and tenth year. Significant fee reductions were possible. The refusal or review rate was very low, according to Director General Qu, who stressed the high quality of the fast processing.

Germany has seen a contrary development: The number of utility model applications has been decreasing continuously for years. Head of the Directorate General Maile mentioned characteristic features of the domestic system of utility model protection and explained the business situation of the DPMA with regard to application procedures and cancellation proceedings. The utility model area at the DPMA – he summarised – was “well positioned” not least in view of the fast and fully electronic case file processing at the Utility Model Unit and the significant reduction of pending cancellation proceedings. In view of the declining number of applications, he raised the question about the causes and the possibilities of making the German utility model more attractive again and about how the DPMA could contribute to this goal.

Dr Tobias Wuttke emphasised the strengths of the often underestimated utility model: Among other things, it was “ten times faster” than a German or European patent, “extremely low-cost”, flexible and very effective. The Munich lawyer was a speaker at the session “The importance of the utility model in today’s world – a user’s perspective” together with Director General of the Beijing Patent Examination Cooperation Center of the CNIPA Guo Wen, who focused on explaining the CNIPA evaluation report.

Dr Wuttke stressed the importance of carefully phrasing subclaims for defending a utility model and underlined the valuable options provided by splitting off from a patent procedure. “Toothless tiger, as if!” Particularly for small and medium-sized enterprises (SMEs), the utility model was a valuable option for protection. However, he complained that the advantages of this IP right were often not known to German medium-sized companies. Just like other participants later on, he called for making utility model protection also available for processes. In view of the ever shorter innovation cycles, Dr Wuttke considered the ten-year period of protection to be sufficient.

Quo vadis? Prospects for the utility model in China and Germany

The following lecture went into detail. And it became clear that there were quite different positions on some points. “Quo vadis? Prospects for the utility model” was the title of the workshop moderated by Beat Weibel, Head of Corporate Intellectual Property, Siemens: Where was the Chinese IP system heading in view of the immensely rapidly increasing number of utility model applications, and where is the German system heading in view of the falling number of applications?

Cui Haiying, Director of the IP Protection Department of the CNIPA, reported on the option of taking legal action against IP infringements in China not only in court but also through administrative channels. She presented measures that China had recently taken or intended to pursue in the field of enforcement of IP rights: To strengthen and better protect IP rights, promote exports, expand market access and make investments more attractive. In this context, she mentioned that the Chinese office had been reorganised and renamed from SIPO to CNIPA last year.

Patent attorney Paul-Alexander Wacker called for an expansion of utility model protection in Germany, stressing the great importance of utility models for small and medium-sized enterprises (SMEs): Utility model protection should also be available for processes, biotechnological inventions, software and business methods and be extended to twelve years. In addition, he advocated an extension of the grace period from six months to one year and changes in calculating the amount in dispute.

Higher hurdle for the inventive step in China? Expansion of protection in Germany? 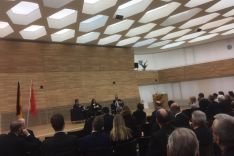 The lively and even quite controversial discussion that followed initially focused on the requirements for the inventive step of utility models under Chinese law. Representatives of industry described the problems confronting internationally active companies in China due, on the one hand, to the high number of IP rights and, on the other hand, to the comparatively low protection requirements for utility models. Deputy Commissioner He and President Rudloff-Schäffer also joined the discussion, during the course of which the participants discussed, in particular, the suggestions addressed to the legislature by Mr Wacker.

In the second workshop, experts discussed the post-registration cancellation proceedings, the “litmus test” for a utility model. Guo Wen, Director General of the Beijing Patent Examination Cooperation Center of the CNIPA, and Zhao Shuang, Deputy Director at the CNIPA, presented the cancellation proceedings applicable in China, which rather constituted invalidity proceedings, were frequently used and were similarly shaped for patents, utility models and designs. Hans Christian Metternich, Presiding Judge at the Federal Patent Court, talked about the practice of the court’s Board of Appeal for Utility Models. The workshop was moderated by patent attorney Sven-Erik Braitmayer.

The fact that utility models are an attractive option for protection for small and medium-sized enterprises, above all, was a recurrent theme throughout the conference. He Hua also stressed this in his closing remarks when he referred to the 40 million SMEs in his country, which accounted for 99% of all businesses in China.

“Friends will talk about everything”


In her closing remarks, the DPMA President stated that the symposium had made clear the different features of utility model protection in the two countries, but had also led to a better understanding of the respective legal systems. When friends meet, openness and differences are part of a dialogue, Cornelia Rudloff-Schäffer stated. Deputy Commissioner He also stressed that the meeting had deepened the friendship and trust between the two offices and that a new chapter in the success story of cooperation had begun.