The steam of a world in change

No, James Watt didn't invent the steam engine. But he turned it into a machine that actually changed the world. 250 years ago, on 5 January 1769, the Scotsman received a patent on his "New invented method of lessening the consumption of steam and fuel in fire engines"

GB176900913A). The industrialisation of the world began with Watts' reworking of the steam engine.

As early as around 1700, Denis Papin and Thomas Savery designed steam-driven pumps to remove water from mines. However, their machines did not go beyond the experimental stage. In 1712, Thomas Newcomen succeeded in designing the first usable steam engine.

In these first steam engines, a piston in a cylinder was pressed by a steam jet and pulled upwards by a pump linkage. The steam heated the air in the cylinder and allowed it to expand. Cold water was then injected to cool the air in the cylinder. A partial vacuum was created, which pulled the piston down again slightly, but above all the air pressure from above was effective (hence the term "atmospheric" steam engine). Then steam could be supplied again and the cycle began anew. The same cylinder had to be heated and cooled for each piston stroke. The problem with these machines: low efficiency and enormous fuel consumption. 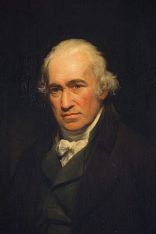 Steam engines in Newcomen´s design were in use in Great Britain for half a century practically unchanged, since nobody had an idea as to how their efficiency could be improved. Until the talented mechanic James Watt (born 1736), who ran an instrument making workshop at the University of Glasgow, was commissioned by a professor to repair a broken steam engine.

Watt did not repair it, he rethought the whole construction. Then he made the decisive improvement: “The idea came into my mind that as steam was a gas it would rush into a vacuum, and if I linked the engine’s cylinder to a vessel at low pressure, the steam would rush into it. The steam would condense there and it wouldn’t cool the engine-cylinder.”

The condenser is the solution 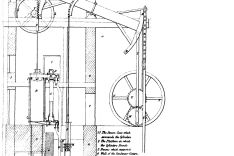 Then the question arose: where to put condensed steam from the cylinder? Watt added the condenser to the steam engine, which was surrounded by cold water and in which the steam could liquefy again. He thus shifted the cooling process out of the cylinder, which thus remained warm. Watt was now able to dispense with the atmospheric return of the piston and let the engine do its work on both piston strokes.

The process was supported by a vacuum pump connected to the condenser, which absorbed the hot water from the condensation steam and conveyed it even hotter back to the boiler, which could then convert it back into steam. Watt also kept the piston warm with a hot steam jacket.

On January 5, 1769, James Watt was granted one of the most influential patents of all time for these improvements. His steam engine made mankind truly independent of muscle, water or wind power for the first time. To determine their power, Watt introduced the unit "horsepower"; later the unit was named after him. 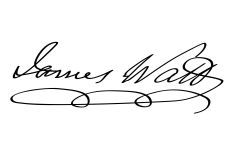 Watt continuously improved the steam engine over the years, developed the centrifugal governor, the double-acting cylinder and the mechanism named after him with the Watt linkage and the Watt parallelogram, which made a smooth rotation possible (see

It was not least thanks to this crankshaft that the Watt low-pressure steam engine could do much more than just pumping out flooded mines. With this universal drive engine, it was possible to operate a factory - such as the spinning mills that soon sprang up - and start mass production.

Father of the Industrial Revolution Watt succeeded in doing something that generations of legions of engineers working on combustion engines have still not been able to do: he reduced the fuel consumption of his machines by up to 80 percent compared to the predecessor models.

Watts and his business partner Matthew Boulton therefore developed a self-confident leasing model: they lent out their steam engines (well protected by extended and new patents) and demanded payment of a third of the fuel savings compared to a conventional steam engine with comparable performance. With success: Watt died a rich man in 1819.

James Watt's improvement of the steam engine made him the father of the industrial revolution, which set world history on a new course. Perhaps today we are in a similarly profound period of upheaval: digitization, a late consequence of industrialization, is now changing the world from the ground up as well.