The invention that takes winter sports enthusiasts to the top

Winter holiday season! Many people are now heading towards mountains for skiing. But this winter fun would never have become a mass sport if there hadn't been some helpful inventions. The most important of these is now celebrating its anniversary: 85 years ago, the first ski lift with barst o cling on went into operation in Davos.

Until then, skiing had been a much more laborious, much more sporting affair. If you wanted to race down a mountain on skis, you had to climb up first. The ski instructors in Davos, Switzerland, calculated at the time that, during a one-hour lesson, their students spent only six minutes actually skiing. The rest of the time they were busy walking up the mountain again. So, what could be done about it?

With water power up on the toboggan hill 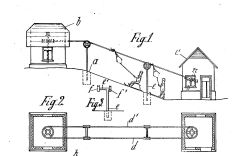 At that time, there had been attempts for quite some time to mechanically pull winter sports enthusiasts up onto the mountains. The world's first "ski lift" went into operation on 14 February 1908 in Schollach near Eisenbach in the Black Forest, Germany. Robert Winterhalde, landlord of the "Schneckenhof" hotel, wanted to make it easier for his guests and installed a pulling rope on his sledge hill, which he operated with water power via a mill wheel. The lift was about 280 meters long and overcame a height of 32 meters with five wooden supports. The guests were able to cling to it using special pliers with lever arms.

CH44626A, also FR392360A). During the First World War the lift was dismantled, but the mill still stands today.

In 1908, the Bödele hill in Vorarlberg, Austria was also equipped with a lift-like ascent aid. In principle, this was a motor-driven cable winch that pulled a sled uphill. Devices of this type remained in use for several decades, especially in Switzerland. 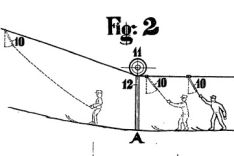 A few years later, in Davos, a ski-enthusiast engineer worked on an efficient, easy-to-use transport device. Ernst Gustav Constam (1888-1965) from Zurich filed a patent application in 1930 for a "towing cableway with rope suspensions for skiers" (

CH147025A). However, it took another four years before his lift was actually built. Hotelier Leonhard Fopp financed the construction of the facility by the Adolf Bleichert & Co. ropeway factory of Leipzig on his slope at Bolgen in Davos. On 23 December 1934 the lift was tested for the first time, the next day it opened for business.

The Bolgen lift, the world's first ski lift with transport bars, was 270 metres long, overcame a height difference of 60 metres with five supports and was driven by a 24 hp electric motor. However, its bars were J-shaped and were could only transport a single person. 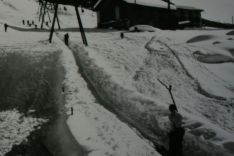 The first version of the Bolgen lift, still with J-shaped towing bars

After the successful first ski season, ski instructor Jack Ettinger suggested replacing the J-brackets with T- or anchor-shaped bar that could carry two people at the same time. Constam immediately put this proposal into practice. This gave the ski lift the shape it still has today.

In the course of time, there were many other ideas for ski lifts, such as the ski lift with a club-like holding device ( 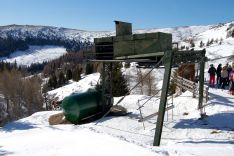 Diesel-driven T-bar ski lift from the 1970s at Hohen Zinken in Steiermark, Austria

Ernst Gustav Constam soon received orders for many other lifts in Switzerland and the Alpine region. In 1940 he went to the USA, where he is said to have built 80 lifts. Constam also applied for other patents relating to ropeways, including the "Method of operating an aerial ropeway for passenger transport" (

CH 221789). In it, he established the principle of the ski chairlift. This principle has remained largely the same to this day, but is continuously developed in detail (see e.g.

Today, the T-bar ski lift (just like the "white" winter itself) is an endangered species in this country: the more comfortable and effective chairlift has replaced it almost everywhere on the slopes. T-bar lifts can be found in the ski areas of the Alps almost only on flat practice slopes or as short connecting lifts. But still every beginner learns how to ski on a T-bar ski lift, just like back then in Davos.