The umbrella is a practical invention. But a canopy to take along is even more practical when it can be folded up so small that it fits in every pocket. We owe this idea to Hans Haupt, who applied for a patent for a "shortenable umbrella" on April 26, 1930. He called his pocket umbrella "Knirps" (munchkin, tyke, tiddler) and founded a limited liability company of the same name to distribute the innovative product.

Unfortunately little is known about the inventor. Hans Haupt is said to have been a former mining assessor from Breslau. It is said that he needed a cane because of a war injury and therefore could not carry a regular umbrella with him. That is why he invented the small, foldable umbrella that fits into the coat pocket. In any case, Haupt made an extremely practical invention that is just as useful today as it was then. Therefore,

Hans Haupt´s Knirps made it into the DPMA gallery of "Milestones of technology".

The long way to the short Knirps 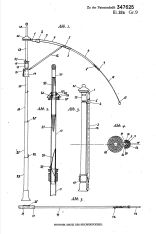 What is little known is that the famous patent of 1930 was neither Haupt´s first nor last umbrella-related invention. In fact, he had been tinkering with folding umbrellas for years. Already in 1916 he had applied for a "shortenable umbrella with telescope-like structured pole parts" at the Reich Patent Office (

However, Haupt did not only deal with umbrellas, but also made further inventions which brought it to patentability, for example "Claw connectors for drive and conveyor belts" (

The next step on the way to the Knirps was to improve the folding of the umbrella cloth. In 1919 he applied for a patent for a "Collapsible umbrella", whose "umbrella cloth is attached only to the uppermost part of the roof bar, except at the two roof bar ends, and only so far away from the top of the umbrella that when the roof bar parts are pushed together it is placed in a single double fold, one part of which covers the whole length of the collapsed umbrella" ( 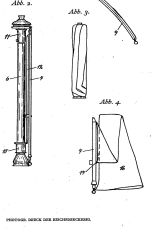 When Haupt applied for his next patent, simply called "umbrella", in 1925, he had already found the ideal name for his product: Knirps. In the meantime, he had also founded a „GmbH“ (Ltd.) of the same name in Berlin, which filed the application. In 1928 he registered the trademark (398527) which is still valid today.

"The new feature is now that the top edge of the handle sleeve reaches up to the upper ends of the roof struts. On the one hand, this ensures that the struts are separated from the forming cloth folds when the umbrella is shortened, so that damage to the folded umbrella cloth at the sharp-edged struts is avoided, and on the other hand it also achieves that even in the upper half of the folded umbrella frame the struts and roof bars do not lie on top of each other and consequently the umbrella can be gripped at the upper end for pulling apart without the pressure pressing umbrella bar parts on each other and thereby damaging them or making pulling apart more difficult" ( 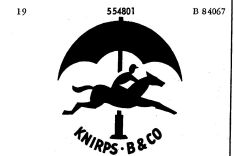 In 1928 Haupt again applied for a patent for a "shortenable umbrella", this time again under his own Name (

DE540712): "The new feature essentially consists in the fact that the sliding guide member is arranged laterally of the locking springs in the stick member to prevent its rotation and thus also that of the handle connected to it".
Haupt registered the next further development in 1929, on his own name, as it concerned "conventional" umbrellas: "Umbrellas closing by a spring ring"( 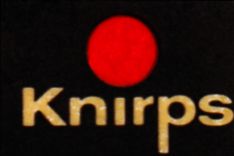 In 1930 came the application which today is regarded as the birth of the Knirps: "Shortenable umbrella",

DE60601 , registered by the GmbH of the same name with seven patent claims, which refer especially to the auxiliary struts. "The novelty", according to the application, "essentially consists in the fact that the auxiliary struts are arranged with one end freely movable on the umbrella frame.“ The patent was granted on 23 November 1934.

Innovative marketing made the Knirps a hit 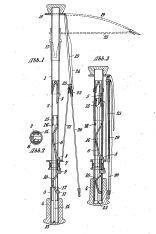 It apparently took Haupt a while to find a manufacturer for his invention. Only Fritz Bremshey, heir to the traditional company of the same name in Solingen, Germany, recognized the great potential of the small umbrella. In 1932 he brought the first Knirps onto the market. Initially, only female buyers were targeted.

Bremshey countered initial scepticism on the part of buyers with innovative advertising and marketing campaigns, such as live demonstrations of the Knirps in shop windows. These demonstrations made the little umbrella well-known and gradually became a bestseller.

US 2725888). The little brolly became world famous. This of course also brought imitators with it. For Bremshey the market gradually became narrower. In order to distinguish the Knirps more clearly from its competitors, the Solingen-based company introduced the red dot as part of its brand logo in 1969. 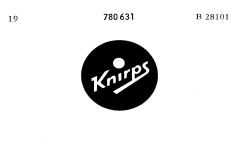 In addition to constant technical and optical developments of the foldable umbrella (e.g. automatic opening and/or closing), the registration of new brands was also part of Bremshey's product care, including the - from the current point of view bizarre - brand "Knirps Corona"(725188)!

Bremshey could not withstand the price pressure by cheap imports from the Far East in the long run. At the beginning of the 1980s the company went bankrupt. The traditional Knirps brand finally ended up in an Austrian company in 2005. Even after the Bremshey bankruptcy, Knirps continued to apply for industrial property rights for further innovations, e.g. 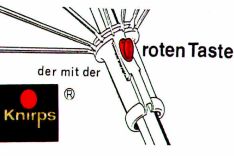 Today, the former market leader only serves a small niche in the umbrella business, which is almost completely dominated by cheap Asian products. In this niche - let's call it "small & distinguished" - the company seems to have established itself economically very well and offers various umbrella products. Even after more than 90 years, the Knirps is still very much alive.

To this day, the good old brolly is still being further optimised by inventors: there are for example self-inflating umbrellas(