The "first computer" - an ancient miracle of technology

Spring 1900 in the Aegean Sea: Off the coast of the small Greek island Antikythera men dive for sponges. They reache into depths of 50 meters and more. One of them, Ilias Stadiatis, returns from his dive with the bronze arm of an ancient statue. He has found an ancient shipwreck on the seabed.

For a year, the sponge divers, soon to be supported by the Greek Navy, brought numerous finds from the sunken Roman ship to the surface. The salvage operation marks the beginning of underwater archaeology. The wreck from the Hellenistic period is one of the largest antique ships ever found: it was over 50 metres long! Its sinking could be dated between 70 and 60 B.C. with the discovery of coins from Pergamon in the wreck. 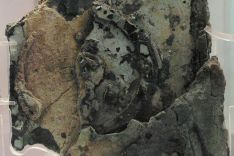 Back side of fragment A

Today there is sometimes talk of a "Titanic of antiquity", because a ship with such precious cargo from this time has not been found again so far. The divers lift magnificent statues from the depths (often unfortunately in poor condition). Among them most valuable bronze sculptures (like the so-called "Antikythera Ephebe"), of which only very few from antiquity have survived.

Among the treasures from the Antikythera wreck, which are brought to the National Archaeological Museum in Athens, there is also a small lump of corroded metal with remains of a wooden box, which initially does not interest anyone. On 20 May 1902 Spyridon Stais, cultural politician and cousin of the director, visits the museum's magazine. He was the first to pay attention to the now disintegrated piece of bronze with the inventory number X 15087. He discovers that it must have been the remains of a complex precision mechanical apparatus. The local newspapers report about it (

The secret of the bronze lumps 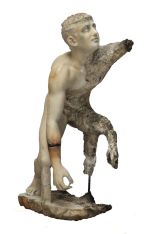 Statue of a wrestler from the Antikythera wreck. Well preserved is only the side of the figure that was hidden in the sea mud.

At first it is assumed to be an astrolabe. In 1905, the Munich philologist Albert Rehm was one of the first scientists to systematically examine the bronze fragments (the largest of which measures 18 by 15 centimetres). He assumes that it is a kind of calculating machine.

More cannot be read from the metal lumps due to the state of preservation at that time. For decades nothing happens. It was not until the 1950s that the British historian of science Derek de Solla Price returned to the intensive study of the 82 fragments. He had them X-rayed and gamma-rayed and gained groundbreaking insights: Hidden gears, inscriptions and gear remains become visible.

"Like opening a pyramid and finding an atomic bomb” 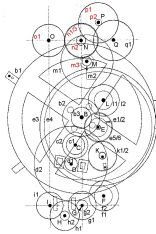 Reconstructed scheme of the gear train in the mechanism

For Price, the fragment is an "ancient computer." He makes the mechanism known worldwide and makes spectacular comparisons: Discovering such a mechanism in a Roman wreck is "like opening a pyramid and finding an atomic bomb” or “like finding a jet plane in the tomb of King Tut”.

The mechanism of Antikythera dates from the late 2nd century BC and is by far the most sophisticated device known from antiquity. The bronze lump was once an apparatus on a technical level that Romans and Greeks had not been thought capable of until then. In fact, mankind needed more than one and a half millennia to almost reach this state of the art again.

The apparatus from the wreck was once a complex mechanical "computer" that determined the cycles of the solar system and astronomical phenomena. With it the movements of the celestial bodies visible from the earth could be represented. For example, he had an eclipse calendar to display past and future solar and lunar eclipses. The mechanism bundled the entire astronomical knowledge of the ancient Greeks and Babylonians; it is virtually an encyclopedia of astronomy of that time. It is also an unprecedented mathematical and engineering masterpiece.

Exploring the ancient miracle with the most modern Technology 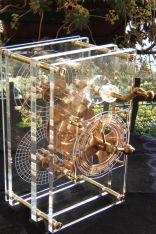 Reproduction model of the mechanism by Mogi Vicentini, 2007

In recent decades, science has intensively studied the mechanism. Following Price, researchers such as Michael Wright and Tony Freeth each used the most modern equipment such as computer tomographs to elicit further secrets from the bronze lumps.

In new patent applications in this field, there is explicit reference to their possible use in the fluoroscopy of objects such as the Antikythera mechanism, see "X-ray source, high-voltage generator, electron gun, rotating target arrangement" (

With the new methods, further gears (30 have been preserved) and components inside the fragments could be made visible and new information about their arrangement could be obtained. Thanks to special cameras and computer game software for surface modelling, the readable amount of engraved Greek text was multiplied.

What the machine was able to display 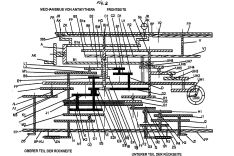 The mechanism was originally about the size of a thick book, with inscriptions and a crank on the side. It had 3 main dials, one on the front and two on the back. The front dial was a solar calendar with daily and monthly scales (Egyptian month names) and Babylonian star constellation names. Inside was a second dial with the Greek signs of the zodiac, which was movable to compensate for leap years. The dial probably had three clock hands, one for the date and two more for the positions of the sun and moon. It also contained a second mechanism with a spherical model of the moon showing its phase, a lunar calendar.

The inscriptions on the front of the device refer to the planets Mars and Venus. It is believed that the mechanism could indicate the positions of all five planets known to the Greeks. So it was probably also a portable planetarium. In addition, the front dial offered a parapegma indicating the rise and fall of certain stars. 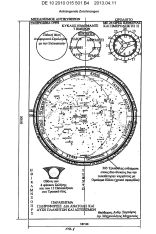 The upper of the two spiral-shaped dials on the back indicated the 235 months of the 19-year Meton cycle. The 76-year-old Kallippos period was indicated by a smaller auxiliary dial. The lower rear dial depicted the Saros Eclipse cycle with 223 subdivisions. It also had a smaller secondary dial showing the 54-year-old Exeligmos cycle.
And finally, there was an Olympic calendar for the four-year period between the Olympic Games, which regularly featured other competitions, the Panhellenic Games, whose venues were also displayed.

Several attempts were made to rebuild the mechanism. Most models are now outdated due to new research findings. A few years ago, engineer Theodor Sartoros had his model patented by the DPMA: "Antikythera mechanism with planetarium, calendar and clock (electric or hydraulic)"(

A work by Archimedes? 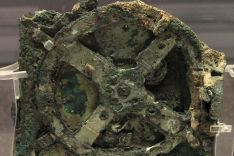 Front side of Fragment A

But what was the name of the genius who created this technical marvel some 2200 years ago? It was long believed that the mechanism originated in Rhodes, where Hipparchos lived (around 190-120 BC). The geographer and mathematician is considered one of the greatest astronomers of antiquity; among other things, he developed a quantitative geometric model for the anomaly of the moon's movement. The mechanism contained a mechanical implementation of this model.

On the other hand, the month names of the lunar calendar on the mechanism are in Corinthian Greek, indicating that the apparatus might have come from Corinth or one of its former colonies, such as Syracuse. There lived the great Archimedes (around 287 to 212 B.C.), who is said to have constructed a model of spheres.

To this day, the mechanism still inspires inventors, such as the applicant for

DE102008034718A1 (1,06 MB), who calls his "gnomonic measuring device" (an analogue position determiner) "Apolytarios", after the southern tip of Antikythera, where the device was found. 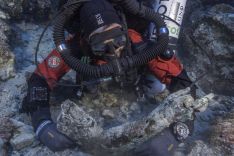 "Return to Antikythera" project: A diver finds the bronze arm of a statue in 2017 in the wreck

After more than a century of research, it is still unclear what exactly this elaborate and expensive apparatus was made for. The prediction of the phenomenon of the sky could be useful to the rulers at that time for the spiritual support of their claims to power. Seafarers would certainly have been grateful for such an instrument in navigation. Professional astronomers would have found the mechanism a valuable help, but even more so interested and wealthy laymen. In the meantime, it has been found out that the inscriptions on the front practically resemble instructions for use. It is quite possible that the mechanism belonged to a very wealthy citizen. A high-tech gadget for antique millionaires interested in the stars?

The wreck of Antikythera is still being further explored even over a century after its discovery. The famous Jaques Cousteau made expeditions to the ship in the 1950s and 1970s. In 2012, the Greek Ministry of Culture launched a new campaign, which is still ongoing and has produced other exciting finds: ceramic vessels, oil lamps, gold jewellery, silver and bronze coins, bronze statuettes, fine glass objects, elements of marble sculptures and even human skeletal remains, from which important findings are expected. One even hopes to find further parts of the mechanism. Research into the wreck and the mechanism of Antikythera is, in any case, far from over.