The best-known patent examiner of all time

A genius of the century, an icon of the natural sciences, the most famous physicist of all time: With Albert Einstein, you run out of superlatives. 140 years ago, on 14 March 1879, in Ulm was born the man who shaped our knowledge of the world as only Newton did before him.

One could write infinitely many interesting things about this multifaceted, dazzling figure on the occasion of his anniversary. We are concentrating on one particular aspect: Albert Einstein as patent examiner.

Man of the century

The American magazine "Time" voted Einstein "Person of the Century" in 1999. Einstein's multifaceted biography reflects the eventful 20th century: The talented young libertine who struggles with the authoritarian educational institutions of the German empire. The unrecognised genius who has to keep his head above water for a long time by earning a living. The passionate pacifist who witnesses two world wars and demands the development of the atomic bomb against his conviction. The globally acclaimed scientist who is discredited and persecuted at home. The refugee who has to leave his country of birth and finds his new home in the democracies of the West. The Jew whose cousin is murdered in a concentration camp. The fighter for peace, reason, disarmament and tolerance, who wants to curtail the nuclear threat which he himself had paved the way for.

Einstein's young years were not a success story ("The really important things are learned differently than by words," he should say later): He dropped out of high school in Munich and failed to pass the entrance examination at the Polytechnikum Zürich (now the Swiss Federal Institute of Technology). After he had completed his "Matura" in Aarau (contrary to legend, with quite good grades!) and successfully graduated as a subject teacher for mathematics and physics in Zurich, he repeatedly applied for academic assistant positions without success. He was forced to make a living as a temporary teacher and tutor and lived at the subsistence level.

In the end, his connections got him out of this Situation. His friend Marcel Grossmann was a friend of Friedrich Holler, Director of the Swiss Patent Office (Swiss Federal Institute of Intellectual Property) in Bern. Despite an interview that did not go well, Einstein was recruited as a probationary patent examiner. 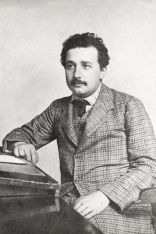 Albert Einstein during his time as patent examiner

From 23 June 1902 Albert Einstein worked as a "third class technical expert" and examined patent applications in the mechanical field. He received 292 Swiss francs a month which was enough to make a living without need back then.

Einstein saw his work as a patent examiner as a "bread-and-butter profession", which did not fully satisfy him; in his spare time he devoted himself to theoretical physics and worked on his doctoral thesis. Later he wrote that "the peace of the secular monastery and the material reassurance for the hard times" were very helpful for him. Here, for example, he examined gravel sorting machines(

CH39619 ). While working on his standing desk in room 86 at the corner of Speichergasse and Genfergasse, the young patent examiner sometimes picked up the violin which allegedly helped him to think.

When his probationary period ended in 1904 he was employed on a permanent basis. At first a promotion was postponed because the director of the patent office thought that Einstein would have to become better acquainted with mechanical engineering. Probably he was actually somewhere else with his thoughts: 1905 went down in the history of science as the "annus mirabilis". Einstein published some of his most important works, including the treatise on the photoelectric effect (for which he later received the Nobel Prize) and the special theory of relativity (with the famous formula E = mc²). In short: An "explosion of genius" (C.F. v. Weizsäcker).

Einstein described his time as an examiner in a letter: "I'm fine; I'm a venerable Swiss “Tintenscheißer” (ink shithead) with a decent salary. Besides I ride on my old mathematical-physical hobby-horse and scratch on the violin". In April 1906 he was promoted to "second class expert". His monthly salary increased to 375 Swiss francs.

He had successfully submitted his doctoral thesis in 1905, but his habilitation was initially rejected by the University of Bern in 1907. Only one year later was he successful and was now able to work as a part-time private lecturer. He gave his lectures before or after his working hours at the patent office: from 7 a.m. to 8 a.m. or from 6 p.m. to 7 p.m.. In the first semester he is said to have had only three listeners, including two colleagues from the Patent Office.

In the peace and tranquillity of his office, a flash of inspiration came to him in 1907, which he later described as "the happiest thought of my life": "I was sitting on my armchair in the Bern Patent Office, when suddenly the following thought occurred to me: 'If a person is in free fall, he does not feel his own weight'. I was amazed. This simple thought made a deep impression on me. It drove me in the direction of a "theory of gravity" - and thus on the way to the general theory of relativity.

Einstein worked at the Swiss Patent Office for seven years. Today he is regarded as the most famous of all patent examiners (but in view of his intensive side jobs he was probably not the best...). In 1909 he finally received an extraordinary professorship for theoretical physics at the University of Zurich and was able to devote himself exclusively to science. But perhaps his most important work came about during his time as a patent examiner. 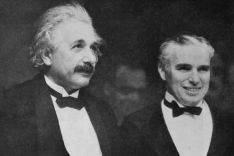 When Einstein met Charlie Chaplin at a film premiere in 1931, the following dialogue is said to have taken place:
Einstein: "What I admire most about your art is its universality. You don't say a word, but the whole world understands you!"
Chaplin: "Right. But your art is even greater! The whole world admires you, even if nobody understands a word of what you say."