The engineer and his century

On January 30, 1951, one of the most famous automobile developers of the 20th century died: Ferdinand Porsche. Most people know him as the "father" of the VW Beetle and founder of the sports car company of the same name. But Porsche also stands for several groundbreaking patents in car manufacturing, successes in racing and innovations such as ASR, the first hybrid car and the first all-wheel drive car.

Ferdinand Porsche was born on September 3, 1875 in the Bohemian town of Maffersdorf, now Vratislavice in the Czech Republic. After an apprenticeship as a tinsmith with his father, he started working for the electrical company Bela Egger & Co. in Vienna in 1893. There he developed a wheel-hub electric motor and then moved further to work for the carriage factory Jacob Lohner & Co. in Vienna.

A milestone: The "Lohner-Porsche" 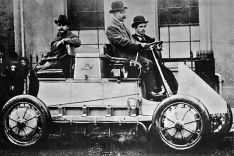 The "Lohner-Porsche," 1901: The all-wheel-drive racing version, made for E.W. Hart of London (at the wheel), with Ferdinand Porsche next to it.

This is where a milestone in the history of technology was created: the "Lohner-Porsche" electric car (patented as

AT19645B, "Drive Steering Wheel with Electric Motor"). It was presented and celebrated at the World's Fair in Paris in 1900 as the first car without a transmission and with a steerable wheel hub. "Semper Vivus" - as the engineer called the vehicle - made Porsche a pioneer of electric mobility. Four wheel hub motors, each with an output of 1500 watts, powered a custom-built Lohner Porsche special edition - making it the world's first all-wheel drive car.

AT19327B). However, the heavy weight of the batteries (around 1800 kilograms) was a major drawback of the design. The subject of hybrid drive was to occupy Porsche for decades to come (see, for example, 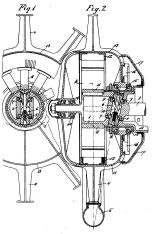 For almost a quarter of a century, Ferdinand Porsche then worked as a technical director for automobile manufacturers. From 1906 to 1923, he worked for the Austrian manufacturer Austro-Daimler in Wiener Neustadt (where, among other things, he also designed for the fledgling aerospace industry, see "Propellerantrieb"

AT64392B), then for Daimler-Motoren-Gesellschaft in Stuttgart-Untertürkheim, where he was also a board member.

After Daimler merged with Benz & Cie. to form Daimler-Benz AG, Porsche's contract was not renewed in 1928. The board is said to have wanted a "less ingenious" but more economical designer for simpler, solid designs. Porsche then made a brief guest appearance as technical director of Steyr-Werke AG, but returned to Stuttgart in 1930. 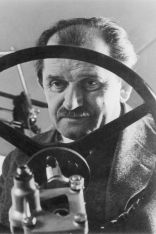 Ferdinand Porsche was now in his mid-fifties, twice an honorary doctor, a well-known designer of successful sports cars (e.g. Austro-Daimler "Sascha," Mercedes-Benz Type S/SS/SSK) - and unemployed. Now he went into business for himself and in 1931, together with some engineers from Steyr, founded a service company, "Dr. Ing. h.c. F. Porsche GmbH, constructions and consulting for engines and vehicles".

Racing success with the mid-engine

This engineering firm, the predecessor of today's Porsche AG, received significant orders over the next few years and became a success story. For Auto-Union, Porsche designed a racing car with an engine located in front of the rear axle - unusual at the time, but still standard for formula racing cars today (patented as a "Fahrgestell für Rennwagen“,

DE692180A). This "Auto-Union racing car" (Porsche Type 22), was to dominate racing in the years that followed (together with the Mercedes "Silver Arrows"), and finally secured Ferdinand Porsche his place in the history of automobile racing. 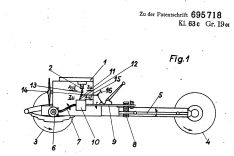 DE695718A, now familiar as the anti-slip control system in most cars

Over the years, Ferdinand Porsche made a number of inventions, some of which have left their mark on automotive engineering to this day. For example, he developed a folding steering wheel to make it easier to get in and out of the car (

DE695718A, he was way ahead of his time: it practically describes the anti-slip control system (ASC/ASR) that is now standard safety equipment in most cars.

After Hitler came to power, Ferdinand Porsche became one of the best-known engineers of the "Third Reich". Only now did he take German citizenship, joined the NSDAP, became a member of the SS with the rank of general ("Oberführer") and had a good personal connection with the dictator. When Hitler demanded the design of an inexpensive, economical car for the masses. Porsche's office was commissioned by the "Reichsverband der Deutschen Automobilindustrie" in 1934 to develop the prototype for such a "Volkswagen".

The Beetle's many fathers 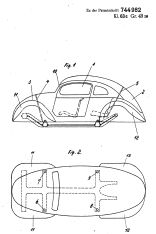 The history of this car, which was first called the "KdF-Wagen" ("Strength through Joy"-car) and after the war was to become the VW Beetle, the most built car in the world, is complex and not without controversy. Ferdinand Porsche is widely regarded as the "father" of the Beetle, but the contribution of others is more significant.

On the one hand, there was the engineer Josef Ganz, who had previously developed the similar "Maikäfer" and the "Standard Superior" and thus influenced the design of the Volkswagen. There was also Karl Rabe, Porsche's longtime collaborator, who played an important role. And there was the famous Béla Barényi, later inventor of the "crumple zone" Knautschzone. His contribution to the Beetle concept - probably including the air-cooled four-cylinder boxer engine in the rear, the transmission in front of the rear axle, the longitudinally mounted crankshaft and the aerodynamic shape of the hump - were even the subject of legal disputes after the war (an example of his patent applications from this period:

Creation of the "Beetle" body 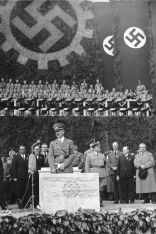 Laying of the foundation stone for the "factory of the KdF car" (Volkswagenwerk) on May 26, 1938; Ferdinand Porsche on the far right.

Hans Ledwinka, in turn, had developed vehicles for Tatra that anticipated many elements of the Beetle, especially the Tatra 97 (see e.g.

DE1219339B). Tatra sued Porsche for patent infringement, but the German occupation of the Czech Republic in 1939 stifled this copyright dispute. Volkswagen then paid compensation to Tatra in the 1960s.

And then there was Erwin Komenda. From 1931 until his death in 1966, Komenda was chief engineer and head of Porsche's body construction department. He was named as the inventor in the 1936 patent application filed by Porsche, "Motor vehicle with downwardly open body forming a self-supporting bell" (

DE744982A). The drawings of the patent document show the chassis line of the VW Beetle, the most built car body of the 20th century.

Ferdinand Porsche played a major role in the creation of the Volkswagenwerk as chief executive and supervisory board member; his son-in-law Anton Piech became plant manager. Due to the outbreak of war, however, the KdF car did not go into production. Instead, the Schwimmwagen and Kübelwagen for the army, which were based on the "Volkswagen," were manufactured in Fallersleben (now Wolfsburg), as were parts for aircraft and bombs, and later the "V1." Porsche also used forced laborers at the Volkswagen factory, even actively asked for them and was fully aware of their murderous working conditions.

After the "Volkswagen", Porsche also received orders from the Nazi regime to develop a "people's tractor" and other lucrative jobs. His company was transformed into a limited partnership in 1937, the shares of which belonged not only to himself but also to Ferdinand's children Ferry and Louise and his son-in-law Piech (to this day, family ownership plays a major role in the web of ownership of Volkswagen and Porsche). Porsche KG grew and prospered thanks to its proximity to the Nazi regime. But not all of Porsche's projects turned out to be successful: his tank developments, for example, turned out to be failures.

A new start in Carinthia 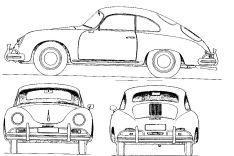 As World War II drew to a close, Porsche moved its development office and parts of its production to Carinthia. After the defeat, Ferdinand Porsche was arrested several times in connection with the takeover of Peugeot during the German occupation of France, but was ultimately acquitted in 1948.

Meanwhile, son Ferry had had the car designed in Gmünd that was to start up the second part of the company's success story: the Porsche 356 sports car. Ferdinand Porsche is said to have been very satisfied with this car and, before his death, witnessed the start of series production in Stuttgart-Zuffenhausen. The company he founded thus established itself as a successful sports car manufacturer – right until today.