The Whitehead mystery of the world's first flight

To fly or not to fly, that is the question: Perhaps the world's first powered flight took place on August 14, 1901 in Bridgeport, Connecticut - or maybe not. Few questions in the history of technology are discussed as fiercely as the question of whether the Wright brothers were the first to fly a powered aircraft when they took off with their "Flyer" in Kitty Hawk on 17 December 1903 - or Gustav Weißkopf more than two years earlier?

"Confused by the parties´ favor and hate, his character image fluctuates in history": Schiller wrote this about Wallenstein, but it could also apply to the Bavarian Weißkopf. For a century now, the strategy of the Wright defenders has included discrediting him as either a dreamer or a chronic show-off. Others see him as a visionary, excellent engineer and glorious pioneer.

The Weißkopf controversy is a real science thriller with villains and heroes, but without clarity about who is who. The fact is that it cannot be proven beyond doubt that Weißkopf's motor flight of August 14, 1901 actually took place. But it is also a fact that the Wrights asserted their claim to the fame of the first powered flight more determinedly and eloquently on the one hand, but on the other hand partly also with questionable means.

A Bavarian in Boston 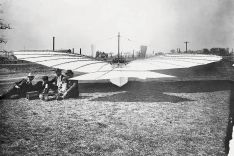 But back to the beginning of the story: Gustav Albin Weißkopf was born on 1 January 1874 in Leutershausen near Ansbach. Not much is known about his early years: Both parents died when he was still a child. He was a temporary apprentice to a bookbinder and a locksmith, then landed in Hamburg on a sailing ship and probably spent several years as a sailor. He is also said to have stayed longer in Brazil. From 1894 he lived in the USA and americanized his name to "Gustave Whitehead".

In Boston he worked as an assistant to Harvard professor William Pickering. Here he met James Means, who founded the "Boston Aeronautical Society" in 1895. He wanted to build gliders in the style of Otto Lilienthal. Weißkopf was hired because he claimed to know Lilienthal and even to have worked with him (which, like so much in Weißkopf's life, cannot be proven). But he may have translated Lilienthal's writings for the Society.

In 1897 we find him in New York, where he builds his own airplanes and successfully presents them to the public and the press. A few weeks later he marries and states "aeronaut" as his job profession in his marriage certificate. He moves to Pittsburgh, where he is said to have made his first flight with a steam motor glider in 1899, which seems to have ended in a crash at a wall. 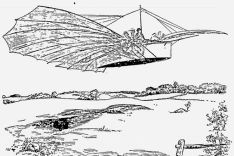 Lithography from the "Bridgeport Herald", drawn after a photo taken on August 14, 1901

1900 he moves to Bridgeport, where he develops his aircraft no. 21, called "Condor". He designed and built both the aircraft and the engines himself. The "Condor" has two propellers powered by a 20 HP engine and a landing gear with an additional 10 HP engine for starting acceleration. This means that the No. 21 can also drive on the road when the wings are folded up.

And so in the early morning hours of August 14, 1901 (possibly?) the first engine-powered flight in history takes place - if you believe a reporter of the local weekly "Bridgeport Sunday Herald".

In order not to cause a stir, "No. 21" is rolled onto the road at midnight by Weißkopf and his two colleagues Dickie and Cellie. Then she drives under her own power to the test site, a large meadow, reports the journalist (possibly "Herald" editor-in-chief Richard Howell). There it first comes to an unmanned test flight with two sandbags as weight instead of the pilot. The engines are started, the assistants hold the aircraft with ropes. Then the No. 21 is released - and takes off: “She looked for all the world like a great white goose raising from the feeding ground in the early morning dawn”, reports the “Herald”. A timer ensures that the engines stop after a short time; the machine glides back to the ground.

Weißkopf is enthusiastic about the test. A short time later he himself takes off with the No. 21, which thus becomes the first real aircraft in history. He flies straight ahead for a few minutes, avoids a few trees by shifting his weight and lands safely again.

It was an exciting moment. "We can’t hold her!" shrieked one of the rope men. "Let go then!" shouted Whitehead back. They let go and as they did so the machine darted up through the air like a bird released from a cage. Whitehead was greatly excited and his hands flew from one part of the machine to another.

The newspaper man and the two assistants stood still for a moment watching the air ship in amazement. Then they rushed down the sloping grade after the airship. She was flying now about fifty feet above the ground and made a noise very much like the "chug, chug, chug," of an elevator going down the shaft.

Whitehead had grown calmer now and seemed to be enjoying the exhilaration of the novelty. (…) He looked back and waved his hand exclaiming, "I’ve got it at last." He had now soared through the air for fully half a mile and as the field ended a short distance ahead the aeronaut shut off the power and prepared to light. He appeared to be a little fearful that the machine would dip ahead or tip back when the power was shut off but there was no sign of any such move on the part of the big bird. She settled down from a height of about fifty feet in two minutes after the propellers stopped. And she lighted on the ground on her four wooden wheels so lightly that Whitehead was not jarred in the least.

How the inventors face beamed with joy! (…) "I told you it would be a success," was all he could say for some time. He was like a man who is exhausted after passing through a severe ordeal. And this had been a severe ordeal to him. For months, yes years he had been looking forward to this time, when he would fly like a bird through the air by means that he had studied with his own brain. He was exhausted and he sat down on the green grass beside the fence and looked away where the sun’s first rays of light were shooting above the gray shrouding fog that nestled on the bosom of Long Island Sound. (…)

The most wanted photo in the history of technology 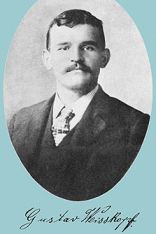 The “Herald” journalist is reported to have taken a photograph, but it's lost. A lithograph, however, has survived, which was printed with the report on August 18, 1901. The fact that there is no photo of the flight is an important point of the Weißkopf opponents. At that time, however, it was customary for newspapers to design lithographs from photos and to print them. This was much easier and cheaper; furthermore, around 1900 the image quality of photos was often still very poor, especially with such snapshots.

The report of the "Bridgeport Herald" was picked up by several other papers. The flight historian and pilot John Brown, who rekindled the controversy about the first powered flight through his publications some years ago, found 136 contemporary articles about Weißkopf's powered flights in the years 1901/1902.

In January 1902 Weißkopf claims to have built his "No. 22", now no longer from wood and canvas, but metal and silk. Eyewitnesses report on a 40 hp self-ignition engine and a rudder (an invention that the Wright brothers later claimed for themselves). On January 17, 1902, Weißkopf made a flight about 11 km over the Long Island Sound, according to one of his letters.

No patents that support Weißkopf's claim 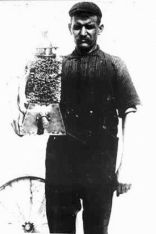 Weißkopf with one of his engines

The problem is that Weißkopf occasionally made contradictory statements about his flights and apparatus. In contrast to the Wrights, he does not seem to have documented his experiments in detail. There are no pictures of "No. 22", so opponents of Weißkopf speculate that it never existed. It is interesting to note that Whitehead/Weißkopf did not apply for a patent for an "Aeroplane" (

US881837A) until December 1905 - but this was a glider without an engine. He also registered the same glider in Great Britain(

The Wrights on the other hand - professionals in PR as well as in IP! - had already filed a patent on their flyer (

Property right management and PR do not seem to have been among Weißkopf's strengths, nor does commercial intuition. But maybe he didn't have much interest in self-marketing either, because he had the feeling that he hadn't yet reached his ambitious technical goals: "The flights are all useless because they don't last long enough," he is reported to have said. "Flying will only take on meaning if we can fly to any place at any time."

Whitehead became quite famous over the next few years thanks to reports of his flights. But he got involved in business with the wrong people, suffered financial shipwreck and then concentrated on building engines for aircrafts (possibly quite successfully, but this is also controversial in the literature). He seems to have made no further successful flight attempts (at least none are documented), which is an argument for Weißkopf critics to also question the flights of 1901-02.

After his engine factory goes bankrupt, Weißkopf keet his family and himself afloat as a simple factory worker. He died impoverished on 10 October 1927 at the age of 53, in Bridgeport.

Did he fly or not? For Weißkopf researcher John Brown, it is clear: the testimonies and reports on hand would suffice as evidence for a conviction in court; so why, conversely, refuse to recognize Weißkopf as first flyer for any longer?

Among the influential opponents of the Weisskopf thesis are the National Air and Space Museum of the Smithonian Institution in Washington and its curator Tom Crouch (pdf!). But his vehement support of the Wright brothers and rejection of Weißkopf feels tainted: When Orville Wright left the original Kitty Hawk flyer to the museum in 1948, it had to sign a secret contract . It obligated itself never to question that it was the Wrights who made the first powered flight in history. 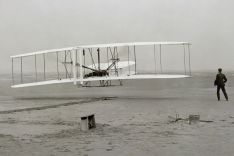 On the photograph of an exhibition of the "Aero Club of America" in New York in 1906, John Brown claims to have discovered a picture that shows Weißkopf's maiden flight and served as a model for the lithograph. However, this image is so small and blurred that its interpretation seems quite daring. But Brown's theses made sure that the discussion was rekindled. The traditional magazine "Jane's All the Worlds Aircraft" recognised Gustav Weißkopf's claim to the first powered flight in 2013, but withdraw again .

The Deutsches Museum dedicated a symposium to the topic in 2016, at which the Weißkopf skeptics were more likely to prevail. In conclusion, it was stated that even in the case of finding clear evidence in favor of Weißkopf, hisstory would not have to be rewritten, but " supplemented at most". The development of aviation, it was stated, “started with the Wrights”.

For the time being, it is only certain that Gustav Weißkopf was one of the pioneers of the aviation age. Also others are attributed with more or less successful experiments with motor gliders, for example Clément Ader (France 1897), Augustus M. Herring (USA 1898) Wilhelm Kress (Vienna 1901), Richard Pearse (New Zealand 1903), Karl Jatho (Hannover 1903) or Samuel Langleys (USA 1903).

Compared to all them, the evidence for a successful flight by Weißkopf is much greater. But ultimately not good enough to knock the Wrights off the pedestal, as it seems...