80 years ago, Konrad Zuse presented an apparatus in his Berlin flat that is now considered a milestone in the history of technology. What a small group of experts got to see on 12 May 1941 at Methfesselstrasse 7 was the world's first functioning, freely programmable computer based on the binary number system and binary circuit technology. Unfortunately, due to the war, the computer was never really used and was destroyed in a bombing raid in 1944. Therefore, it was later a complicated undertaking to prove the machine's technical-historical rank.

Konrad Zuse, born in Berlin on June 22, 1910, tinkered with an "automated photo laboratory" and a "money-changing vending machine" as a child. In 1928, he graduated from high school in Hoyerswerda and initially began studying mechanical engineering at the Technische Hochschule Berlin-Charlottenburg. However, he quickly switched to architecture and eventually to civil engineering.

After graduating, he began working as a structural engineer at Henschel Flugzeug-Werke in Schönefeld. Along the way, he set up an inventor's workshop in his parents' living room. To be able to pay for tools and components, he lent money from friends and family. In June 1937, he wrote in his diary, "For about a year I have been occupied with the idea of the mechanical brain." Zuse had found his life's subject. With incredible energy, he developed the then completely new concept of a program-controlled calculating machine - at a time when neither the transistor nor the IC chip had been invented.

Solving everything with 1 and 0 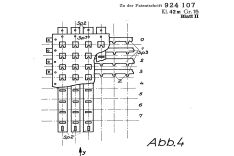 Zuse saw unlimited applications for his new type of calculating machine: It could be applied, he realized, to all problems that could be solved by "yes" or "no" questions, that is, anything that could be processed with "zero" and "one." Based on this binary system, Zuse built his first computer, the "Z1," in 1938: A fully mechanical, programmable numerical calculator that received its commands from punched tape.

This machine already contained all the essential components of modern computers, such as program control, memory, floating-point arithmetic and microsequences. These individual components were realized with the help of Zuse's "mechanical switching elements", for which he applied for a patent as early as 1936 (

DE907948).In connection with this, he applied for a patent in 1937 for a "memory unit constructed from mechanical switching elements", which he finally received in 1955 ( 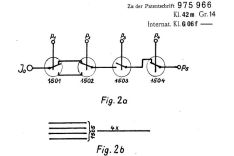 The Z1, literally built from scraps and old parts, never worked reliably due to mechanical problems, but it showed Zuse that he was on the right track. For the successor Z2 of 1940, he used more reliable telephone relays for the central processing unit. That same year, he founded his own company, "Zuse-Apparatebau," to manufacture programmable computers.

In a small apartment on Methfesselstraße in Berlin-Kreuzberg, Zuse continued to work on an epoch-making machine with 2000 relays. On May 12, 1941, he presented his Z3 to a small group of experts. Z3 is considered the world's first functional, freely programmable computer based on the binary number system and binary circuitry.

In the same year, the "Atanasoff-Berry computer" was completed in the USA and "Colossus" in Great Britain. However, both were not "Turing-complete" (universally programmable), the Z3, on the other hand, certainly was in principle, as was only proven in 1998, however. Alan Turing, the brilliant mathematician and "Enigma" cracker, had sketched his "Turing machine" in 1936, the theoretical model of a program-controlled computer.

Fight for a patent

Only one drawing of the Z3 survived the Second World War, as it was destroyed in a bombing raid. This later made it difficult for Zuse throughout his life to prove his outstanding rank in the history of technology. He registered the principle of the Z3 as a "calculating device" with the Reich Patent Office on June 16, 1941 (old file number: Z 26 476 IXb/42m). Probably due to the war, the application was not finally processed.

In 1950, Zuse filed an application with the re-established (West) German Patent Office for further processing of his old patent application (the new file number being Z 391 IXb/42m,

DE0Z000391MAZ (5,17 MB)). ). It was published in December 1952, but a patent was ultimately not granted. This was because other manufacturers (including IBM) now filed oppositions. The proceedings did not end until 1967, when the Federal Patent Court rejected all of Zuse's claims. Zuse was denied the comprehensive "computer patent" he might have sought. 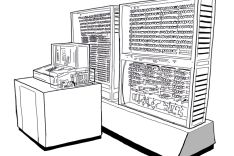 Zuse had the misfortune to have made his most important invention in times of war. Otherwise, the practical, entrepreneurial Zuse might be known today not only as a technology pioneer, but also as the founder of a global technology corporation of the stature of Bill Gates.

Despite Zuse's outstanding role, however, it must be noted that today's computers have several fathers. Their development was a complex historical process; sometimes the American ENIAC of 1944 is seen as the first real computer (although it did not work in binary). In any case, there were forerunners already in antiquity, for example with the mechanism of Antikythera. Zuse himself only learned later about the pioneering achievements of Charles Babbage and Ada Lovelace in the 19th century and paid tribute to the designer of the "Analytical Engine" as the "real father of the computer".

Calculator in the barn 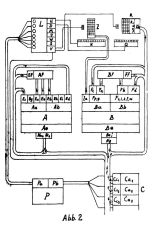 In addition to working on his calculating machines, during the war Zuse developed hard-coded computers for Henschel Flugzeug-Werke to measure the flight path of the radio-controlled glide bomb "Hs 293". He mechanized the reading of the dial gauges - and thus created, as if in passing, the first analog-to-digital converters (it was not until 1960 that Zuse was to apply for a patent for an "analog-to-digital converter with a scale device that indicates the angular position of an axis or the like and carries coded scale values";

The Z4 calculator, a further development of the Z3, was started in 1942, but was not quite finished at the end of the war. It was the only one of Zuse's machines to be saved from destruction by bombing - disassembled in time by his staff, packed and brought to safety in a village in the Allgäu region.

When, after the end of the war, Swiss mathematicians became interested in the large computer housed in a barn, Zuse completed the Z4 and sold it (the first time somebody earned money by selling a computer; another pioneering achievement!). Z4 was installed at ETH Zurich in 1950 and was the only program-controlled computer in Europe at the time. 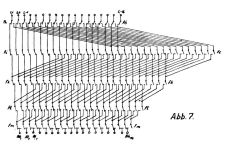 In 1949 Konrad Zuse founded Zuse KG in Neukirchen near Hünfeld (Hesse) and established the computer industry in Germany. He had not remained idle even before that: Between 1945 and 1947, Konrad Zuse developed the world's first programming language, the "Plankalkül." But his 1948 publication went largely unnoticed - a typical fate of inventions that are too far ahead of their time and for which there is not yet a market.

In 1950, Zuse filed a patent application for a "Combined Numerical and Non-Numerical Calculating Machine"(

DE926449) that was capable of "performing arithmetic operations with both numerical values and propositional expressions. ... In addition to performing numerical calculations, such a calculating device can solve all tasks of theoretical logic with all- and existence operators (...), perform statistical tasks of any kind, check the formal correctness of complicated calculation instructions, and much more."

The patent, which was granted for this in 1955, may well be considered the first software patent. Today, the Patent Act explicitly excludes programs for data processing systems "as such" from patent protection.

Zuse as an AI pioneer

Zuse's patent application also includes considerations of artificial intelligence - years before this term was even coined. So Zuse was also an AI pioneer. And he wrote the first chess program!

In 1955, Zuse's first mass-produced computer, the Z11, came on the market. The computer was sold primarily to the optical industry and universities. In 1957, Zuse presented the Z22, the first calculator with a magnetic memory. Until 1967, the company built a total of 251 computers.

Always ahead of his time

Zuse remained inventive throughout his life and was also ahead of his time in other fields of technology. In 1962, his "Photoelectrically backlight-controllable lighting device for motor vehicles" (

DE1204158) described the principle of long distance headlight assistants, which are used in more and more cars today. Even in his old age he still developed a "wind turbine" (

In 1964, Konrad Zuse retired from his company, which was taken over first by BBC in Mannheim and then by Siemens in 1967. After his retirement, he devoted himself to his second great passion, painting. Gradually, his pioneering achievements were recognized internationally. Konrad Zuse received numerous awards and honorary doctorates. One of his last patent specifications names "Zuse, Konrad, Prof. Dr.-lng. e.h. Dr.mult.rer.nat.h.c. Dr.techn.h.c" as the inventor. He died on December 18, 1995 in Hünfeld.

A replica of the Z3, the world's first freely programmable computer, is located in the immediate vicinity of the DPMA in the Deutsches Museum. The original Z4 is also on display there. Konrad Zuse is of course also represented in the Erfindergalerie (inventors' gallery) of the DPMA.