75 years ago, on 1 March 1945, the first vertically-launching aircraft with rocket propulsion took off. The Bachem Ba 349 may also be called the first manned rocket. The "Natter" (viper, its project name) was a mixed construction of rocket and aircraft with a predetermined breaking point, a partially recyclable disposable interceptor. Its first manned test flight ended in disaster.

The "Natter" was created in the last years of the Second World War, when Germany had been on the defensive on all fronts and was looking with growing desperation for "wonder weapons" to fight against the inevitable defeat. This situation gave rise to a number of innovative and crazy engineering developments, which are often interesting from the point of view of the history of technology. Among them were some real pioneering achievements such as the first rocket plane, the Messerschmitt 163, or the first rocket to reach outer space. The latter, the so-called "Aggregat 4" - better known under its propaganda name "V2" - was developed by Wernher von Braun, who later brought the USA to the moon with the Apollo program.

Born out of despair 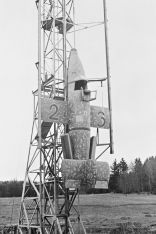 Bachem 349 "Natter" at the starting tower

Also the concept of the "Natter" originally came from Wernher von Braun. The rocket pioneer had already proposed a rocket-powered interceptor in 1939, but the Reichsluftfahrtministerium (Reich Aviation Ministry) rejected the idea. A few years later, when Hitler's Luftwaffe was almost unable to counter the Allied bombers and launched the "Jägernotprogramm“ (interceptor emergency programme), engineer Erich Bachem remembered Braun's idea. He designed a low-cost rocket plane that would very quickly reach the flight altitude of the attacking bombers.

Since the Luftwaffe now lacked experienced pilots, suitable metals and safe runways, Bachem's "viper" seemed promising in this situation: parts of the aircraft were made of plywood, which was still in plentiful supply. All it needed for take-off was a 24-meter-high scaffolding tower with guide rails, but no runway for take-off. Not for landing either, because after firing his weapons the pilot was supposed to eject himself from the wooden cockpit by parachute. The fuselage should disintegrate as planned: While the wooden part crashed, the rocket engine slid to earth on a parachute and could be reused. Since the flight was to last only a very short time and was to be partly controlled by radio from the ground, even minimally trained, inexperienced pilots were suitable for this mission.

The SS relied on the "Natter"

So much for the "Natter" theory. Although Bachem could not convince the Reich Aviation Ministry of his concept (they relied on comparable projects like the Heinkel P.1077 "Julia"), but he did win Heinrich Himmler. The SS had grown powerful enough to conduct independent armament research in competition with the Luftwaffe and Wehrmacht. Himmler assigned Bachem with the construction and testing of the "Natter".

Erich Bachem (1906-1960) had previously designed gliders and caravans (the latter he also resumed after the war), worked for the aircraft manufacturer Fieseler and in 1942 set up his own company in Waldsee (Württemberg). Some of his developments for Fieseler were patented, such as "Hollow body in wings" ( 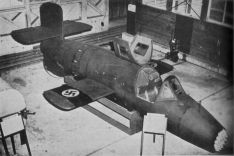 Captured "Natter" without nose; the battery with the "Foehn" rockets is clearly visible

Bachem's design was comparatively simple to build. The stubby wings of the "Natter" were simple, rectangular wooden panels without ailerons or flaps. The engine was a Walter 109-509A rocket motor, which was also used in the Me 163 "Komet", the first rocket plane.

The engine was designed by Hellmuth Walter (1900-1980), who had already applied for several patents on engines when still at a young age (e.g.

DE491156A, 1925). His rocket engine 109-509A relied on the combination of two liquid fuels, the "T-Stoff" (a highly corrosive solution of hydrogen peroxide with a stabilizing chemical) and the "C-Stoff" (a mixture of hydrazine hydrate, methanol and water). When they were mixed together, spontaneous combustion occurred, so that extreme caution was required when handling them. The Walter engine generated about 1,700 kg of thrust, which was not sufficient for the start. Additional boost was therefore provided by four Schmidding 109-533 solid-fuel rockets, which were to burn for about 10 seconds and then blast themselves off the tail of the "Natter".

The engine and rockets together provided a total thrust of 63.8 KN. Bachem calculated a maximum rate of climb of 11,563 meters per minute, but this was probably not confirmed in practice. 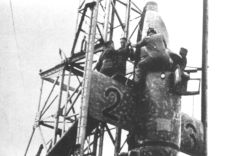 Test pilot Lothar Sieber climbs into the cockpit of the "Natter

The "Natter" should reach the flight altitude of the allied bombers in a few seconds. Then the pilot should take over the controls, bring himself into firing distance and fire all 24 Henschel Hs 217 "Föhn" rockets, which were prepared in the nose of the Bachem Ba 349, in one shot. These uncontrollable missiles had a range of about 1200 meters and were originally developed to repel low-flying aircraft from the ground. They were fired from square batteries, hence the nickname "Bierkasten-Flak" (Beer Crate Flak). Now they were to be used as early air-to-air missiles.

The fuel lasted only for a few minutes of flight time. The pilot only had a very small window of opportunity for his attack. After that the "Natter" went into a descent to about 1500 meters altitude. Now the pilot blasted off the plywood half of the aircraft while a parachute was released to bring the tail safely to earth with the Walter engine. The pilot, who was thrown out of his seat by the delay, then had to operate his own parachute. The wooden parts were to smash on the ground according to plan. 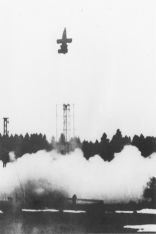 The "Natter“ has started

During first tests the "snake" was towed into the air like a glider and released; the flight characteristics apparently having been useful useful. Further tests worked as planned, so that a "Natter" could be launched with a pilot dummy at the end of February. The test was a success, only the fuel residues in the Walter engine ignited during landing; the engine exploded (quite predictable - and this was only one of several questionable aspects of the "Natter" concept).

Bachem was put under pressure from Berlin to start the first manned test flight. On March 1, 1945, 22-year-old Lothar Sieber climbed into the cockpit of the "Natter" at the test site near Stetten am kalten Markt. The launch seemed successful at first, but after a few seconds the "Bachem" fell back at an altitude of about 500 metres, flew a bow and crashed to the ground a few kilometres away. Lothar Sieber was the first person to launch vertically with a rocket (Yuri Gagarin was not to follow until 1961), but he paid with his life.

The end of the „Natter“

What led to the crash was never fully explained. It is possible that the cockpit flap was not closed properly and therefore the pilot's head was thrown backwards against the fairing during take-off, which either knocked him unconscious or killed him immediately.

Nevertheless further manned tests are said to have taken place, but the approach of the Allies put an end to the development. The Ba 349 was never used in action. All built "Natter“ were blown up or shifted towards the Alps, where the last ones fell into the hands of the Americans. A completely original preserved "viper" can only be found in a depot of the National Air and Space Museum in Maryland. However, a restored Bachem Ba 349 can be seen in the Deutsches Museum in Munich, in the immediate vicinity of the DPMA.