Career of the sticky notes (with a slow start)

Every invention is worthless as long as you do not know what you can use it for. At the DPMA, "industrial applicability" is therefore one of the requirements for patentability of an invention. It may occasionally happen that a development is suitable for a completely different purpose than originally thought (this happens more often in pharmaceutical research, for example; see the example of sildenafil: a substance developed against hypertension, which then became famous for a completely different application under its trade name Viagra). Sometimes it takes years to find the right application for a development. One of the best known examples are the "Post-it" stickers. The underlying patent was registered 50 years ago and the product was launched on the market 40 years ago.

What to do with the microsphere adhesive?

The chemist Dr. Spencer Ferguson Silver (born 1941) worked on the development of adhesives for the Minnesota Mining and Manufacturing Company (3M) in the late 1960s. The new adhesive was originally intended to be particularly glutinous and strong. But the "Acrylate copolymer microspheres", for which Silver applied for a patent(

US3691140A) on March 9, 1970, formed only a weak pressure-sensitive adhesive. Although the adhesive easily stuck to smooth surfaces, it was just as easy to remove again.

What practical benefit could this invention have? Silver racked his brains over this question for years. "I became known as Mr. Persistent because I didn't want to give up," he later recalled (according to Post-it notes manufacturer 3M's website). 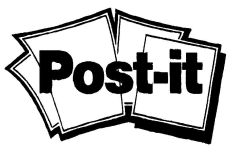 But it was his colleague Art Fry who years later had the idea of what this invention could be useful for. Fry sang in the church choir and was annoyed at every rehearsal about the slipped bookmarks in his vocal notes. If only you had a bookmark that stayed in place without damaging the pages! Then Fry remembered the weak adhesive of his colleague: "That was a eureka moment".

Together Silver and Fry began to develop a marketable product. The breakthrough came when they wrote on the bookmarks prepared with the adhesive, placed them in their colleagues' offices and thus communicated with them. These in-house field trials were a complete success. The sticky notes were the classic case of „a product nobody thought they needed until they did“, Silver recalled. 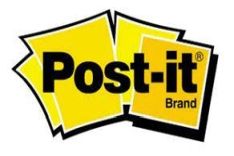 Further development of the idea led to a new patent, which Silver and colleagues applied for on 6 February 1973: "Removable pressure-sensitive adhesive sheet material"(

US3922464A). It perfected the use of the adhesive on paper: the microspheres adhered to different surfaces and could be removed without leaving any residue.

Initially, the sticky microspheres notes were marketed under the name "Press'n Peel" only on a trial basis in some cities in the USA, with mixed success. Finally, it was to take until 6 April 1980 before the product was marketed everywhere as "Post-it" in the characteristic canary yellow and with a size of 76 × 76 mm.