A brand celebrates its birthday

A brand which has become a synonym in Germany and which, after 90 years, has a degree of recognition of practically 100 percent? Oskar Rosenfelder probably never dreamed of this when he filed the word mark "Tempo" (407752) with the Reich Patent Office in Berlin on 29 January 1929.

Only very few trademarks have managed to become a generic term: Selters-Wasser and Tesa are perhaps among them, Uhu, Aspirin too - but above all “Tempo”. Anyone who asks for a paper handkerchief in the German-speaking world usually asks for a "Tempo". 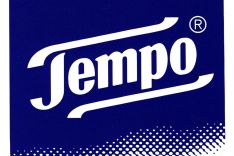 DE81094). In the USA, a few years before Rosenfeld, the Kimberley-Clark group had marketed disposable handkerchiefs under the brand name "Kleenex", which became a generic term there just as much as "Tempo" in Germany. Paper handkerchiefs have been known, however, for centuries in Asia.

Oskar Rosenfelder was head of the "Vereinigte Papierwerke" in Heroldsberg near Nuremberg; together with his brother Emil he also owned the majority of the company. With the "Camelia" sanitary napkin, they were already producing a successful hygiene article. Theiir brother Karl was also in the paper industry and had founded "Bamberger Closetpapierfabrik GmbH". They were the sons of a Bamberg hop merchant of Jewish faith.

The robbed and the profiteer

"Tempo", made from pure cellulose, soon became a great success: in 1933, 35 million parcels were produced per year in Heroldsberg. But after the National Socialists took power, Gauleiter Julius Streicher launched a smear campaign against the "Camelia Jews". The Rosenfelders were threatened, blackmailed and forced to "sell" their company. The new rulers purposefully pursued the "Aryanization" of the economy: Jewish merchants or entrepreneurs were forced to sell their shops or companies to "Aryan" competitors - practically always far below value or only for a symbolic purchase price. Oskar Rosenfelder, who fled to England with his brother and survived the Nazi era there, later called the takeover "theft".

Profiteur was the Fürth entrepreneur Gustav Schickedanz, NSDAP member, founder of the mail-order company "Quelle" and later one of the richest men in Germany. In the course of the "Aryanization", he not only purchased the "Vereinigte Papierwerke", but also several other Jewish companies, thus laying the foundation for his empire. Nevertheless, the Spruchkammer later attested Schickedanz to having behaved "correctly" in the takeovers - a hair-raising trivialization and distortion that some of the entrepreneur's biographers unfortunately still maintain today. 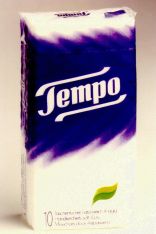 Tempo increases and changes owners
After the end of the Second World War, Schickedanz was classified as a "Mitläufer" only in the course of the "denazification" and thus received the "Persilschein" to continue his entrepreneurial career. His company ensured that the "Tempo" brand continued to grow steadily. This was also achieved with the help of charming advertising. By 1955, more than a billion handkerchiefs had been produced.

The "Tempos" were further optimized over time, for example with the introduction of the "Z-fold", which made it possible to open the handkerchief with just one hand (

(DE7508816U). New containers, the addition of care substances or the (belated) introduction of resealable packaging (

DE8708274U1) have been part of brand care. However, the logo has hardly changed since Oskar Rosenfelder's application in 1929.

In 1994 the Vereinigte Papierwerke, now called VP-Schickedanz AG, were sold to the US company Procter & Gamble. In 2007, this company and brand passed on to its Swedish competitor SCA, which in 2017 spun off Essity, to which, in addition to "Tempo", other well-known brands of hygienic and household paper belong.
Today, around 20 billion wipes are to be sold worldwide every year.