The Beatles, their masterpiece and a famous trademark dispute

It was 50 years ago today... On 22 November 1968, probably the most musically versatile album of all time was released: "The Beatles", better known as the "White Album". A milestone of music, but also of the economic history of popular culture, because this was the seed of a dispute over trademarks and copyrights that lasted for decades.

The Beatles had provided superlatives for years: sales records, unrivalled crowds, Beatlemania. Gradually, the realization had gained acceptance that the works of the “moptops” from Liverpool had an artistic quality that was far above (almost) everything else in the charts. With "Sgt. Pepper" they had delivered a masterpiece in 1967 that changed the (pop) world. What else could come afterwards?

An epochal double album. The exterior formed the greatest possible contrast to the previous album with its opulent, brightly colored cover: Blank white, on it only "The Beatles" in blind embossing as a simple title. Also a stamp with a serial number. Inside the cover four photos of the band members and the titles of the songs. Pure minimalism.

A kaleidoscope of Pop 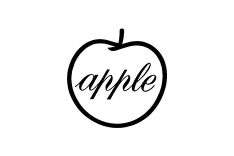 But the music is completely different: never before (and probably not afterwards) did a band reach this musical range, this variety of colours and forms. On the White Album you can find songs of different styles like Blues ("Yer blues"), Country ("Rocky Racoon"), Folk ("Mother Nature´s Son"), touching Ballads ("While my guitar gently weeps"), Rock´n Roll ("Back in the USSR"), Music Hall ("Honey Pie"), sweet lullabies ("Good Night"), fingerpicking songwriting ("Blackbird"), avant-garde sound collages ("Revolution 9") or brute hard rock ("Helter Skelter", often referred to as the first heavy metal piece).

On their previous albums, the Beatles (in competition with Brian Wilson of the Beach Boys) had already exhausted all the sonic possibilities of the studio technology of the time, but even the groundbreaking "Sgt. Pepper" had been recorded on a 4-track machine. Now at Abbey Road Studios they had at their disposal for the first time a brand new eight-track recorder, which had only just been launched and offered new possibilities for overdubs, multi-instrumentation and other tricks, which they all used. The Beatles were always avant-garde from a technical point of view also; Paul McCartney later even applied for a patent (

A band beginning to disintegrate 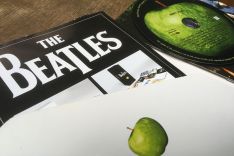 The incomparable versatility of the White Album was also an expression of the increasing fragmentation of the band: four composers (yes, even Ringo contributed a song!) did their own thing with various guest musicians in several studios at the same time; the band increasingly withdrew behind the creative individuals. Personal tensions burdened the recordings: Yoko Ono didn't leave John Lennon's side in the studio, which took some getting used to for the other band members. A sound engineer quit the job. And Ringo temporarily left the band completely and it took some time to persuaded to return.

But there were also economic complications around the album, and that leads us to the legal disputes mentioned at the beginning. The White Album was the first Beatles record to be released under their own label. At the beginning of 1968 the musicians had founded a company. The conglomerate was a very idealistic project, inspired by the Flower-Power zeitgeist, which for example generously gave subsidies to artistic projects, almost all of which went to waste, or operated a boutique in the heart of London, where hippie-like little value was placed on paying for the purchases. In short: With this company the Beatles practically only made losses and they were hopelessly overstrained. Its name: Apple Corps. 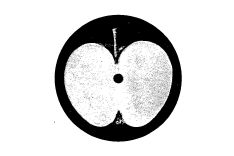 The vinyl records of the White Album were the first to adorn the Apple Records logo: a green apple of the Granny Smith variety, once from the outside, once in cross-section. It became the trademark of the last Beatles records. As with many other famous bands, the idea of registering the name as a trademark was only born long after their dissolution (1148166, 000219014, 000219048).

The company was based in the house 3 Savile Row, on whose roof the Beatles gave their last concert on 30 January 1969. When the band members distanced themselves from each other artistically and humanly, separated as a band in 1970 and finally even sued each other, Apple Corps remained the copyright holder. Of the various branches of the hippie group, only the record company Apple Records, which also had other artists under contract, continued to exist. The end of the Beatles was followed by a number of longstanding legal disputes, which Apple conducted against former record companies or managers of the band, among others. The company is still owned by the four Ex-Beatles or their heirs. 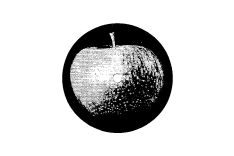 When Steve Jobs and colleagues founded a small computer company in California in 1976, they weren't bothered by the fact that there was already a company called Apple with an apple logo. But the Beatles company, run by their former road manager Neill Aspinall, was not amused: Apple Corps. sued Apple Inc. in 1978 for trademark infringement - the beginning of a decade-long dispute. In the first settlement in 1981, Steve Jobs & Co. paid compensation to Apple Corps. and promised not to be active in the music business.

When Apple computers made MIDI and audio recordings possible from 1986, the Beatles company saw the agreement violated and sued the US company again. The same thing happened again in 1991. The London-based Apple received millions in compensation and forced a new agreement to keep Apple Inc. out of the music business.

White Album jubilee edition. - In spite of the 2007 agreement, it was not until late 2010 that Beatles songs became available on Apple Inc´s iTunes.

The peace lasted until 2003, when the Americans entered the music business on a grand scale with iTunes. Apple Corps promptly sued the computer company for breach of contract. But in May 2006, a London court ruled that the 1991 trademark agreement between the two companies had not been violated.

On February 5, 2007, the computer company announced that an agreement had been reached. It was speculated that a lot of money had flown from Cupertino to London. Apple Inc took over all "Apple" trademark rights, but at the same time announced that it would license some of them to Apple Corps. So it happens that the registered Beatles trademarks out of 1968 with the Granny Smith now belong to the younger computer company, but are still "exclusively licensed" to be found on the Beatles records. This is also the case on the remix new edition of the "White Album", which was released on the occasion of the 50th anniversary.