When the first institution for the protection of intellectual property in Germany was founded in Berlin in 1877, the unification of the German states was only a few years ago. "Imperial Patent Office" was the name of the authority at that time. After World War I, the end of the monarchy and the founding of the Weimar Republic, it became the "Reichspatentamt" in 1919. In 1945, the half-destroyed building in Berlin closed its doors towards the end of the Second World War, only to be reestablished as the "German Patent Office" in Munich in 1949.

The "German Patent and Trademark Office", as it has been called since 1998, has its headquarters on the Isar to this day, while it continues to have an office in Berlin. The tasks of the "Office for Inventions and Patents" of the GDR were taken over in 1990. Today, as the largest national patent office in Europe and the fifth largest national patent office in the world, the DPMA is an established player in European and international cooperation for the protection of intellectual property.

In video: 145 years of the German Patent and Trademark Office

This video is provided via the Youtube video platform. If you use services of this provider, it may be that usage data is collected and possibly stored in server logs. The German Patent and Trade Mark Office has no influence on the type and scope of the transmitted or stored data. For more information on the data collected by Youtube, its storage and use, please refer to the

Historical overview of the German Patent and Trade Mark Office

1877 - foundation of the Imperial Patent Office

The establishment of a German patent authority was stipulated in the Patent Act (Patentgesetz) of 25 May 1877. That authority was named Imperial Patent Office (Kaiserliches Patentamt) and started to operate in Berlin, on 1 July 1877. As early as 2 July 1877, the first German patent was granted for a “production process for a red ultramarine colour”. The inventor was Johann Zeltner of Nürnberger Ultramarin-Fabrik. On 11 July 1877, the ceremonial opening session took place at the imperial chancellery. 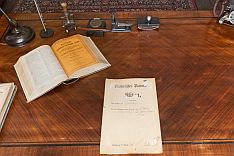 Initially, the office started operations in Wilhelmstraße and, in the years that followed, it had to relocate several times into bigger buildings, due to the large increase in staff, until the office was able to move into the big office building on Gitschiner Straße in Berlin Kreuzberg in 1905.

The DPMA set up a historical examiner office in the Information and Service Centre (DPMA-IDZ) in Berlin. The panoramic view gives an impression of how a patent examiner worked at the beginning of the 20th century.
(Panoramic view: Jan Totzek/panographer.de)

Text version for the panoramic view (in German)

Until 1945, the office - re-named Reichspatentamt (Patent Office of the German Reich) in 1919 - was located on Gitschiner Straße in Berlin. In the last days of the Second World War, the building was severely damaged. However, the majority of the holdings of the library were moved off to a salt mine in time, saving them from destruction.
After the end of the Second World War the Reichspatentamt - like all other state authorities - had to cease business. In the spring of 1948, based on the act of 5 July 1948, temporary receiving centres were set up in the "unified economic territory", which opened in Berlin and Darmstadt on 1 October 1948.

Zweibrückenstraße 12: headquarters of the DPMA since 1954

The German Patent Office with its seat in Munich was established by the "Act on the Establishment of a Patent Office in the Unified Economic Territory" (Gesetz über die Errichtung eines Patentamtes im Vereinigten Wirtschaftsgebiet) of 12 August 1949. On 1 October 1949, it started operations, at first, in the undamaged library wing of Deutsches Museum, with a staff of 423.
Between 1954 and 1959, the German Patent Office (Deutsches Patentamt) moved to the atrium building on Zweibrückenstraße 12, located on the site of former “Schwere Reiter” military barracks. In 1959, the brick office tower block of the Munich architect, Franz Hart, was added in Morassistraße.

On 3 October 1990, the German Patent Office integrated the about 600 staff and 13.5 million patent documents of the "Office for Inventions and Patents" (Amt für Erfindungs- und Patentwesen) of the former GDR. 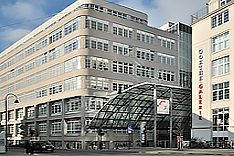 Jena Sub-Office of the DPMA

Since 1 September 1998, when the major part of the Berlin Sub-Office moved to Jena/Thuringia, the German Patent Office has been present at three locations: Munich, Jena and Berlin.

On 1 November 1998, the office was renamed "Deutsches Patent- und Markenamt" (German Patent and Trade Mark Office) to emphasise the increasing importance of the trade mark as an area of work of the DPMA.

2005 - centenary of the patent office in Berlin Kreuzberg

On 10 November 2005, the German Patent and Trade Mark Office celebrated the centenary of the patent office in Berlin Kreuzberg. 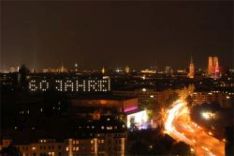 The DPMA celebrated its 60th anniversary in Munich in the evening of 1 October 2009 by illuminating the headquarters on Zweibrückenstraße 12.