In addition to Christmas and Easter, a third holiday now dominates the seasonal offerings in the stores: Halloween. In this country it is controversial and often reviled as an "imported tradition", but the creepy fest has nevertheless established itself as a permanent fixture in the calendar and retail trade - and continues to grow in popularity. In short: Halloween, this gruesome fun, with its creepy gimmicks and dark disguises, is a million-dollar business worldwide. So it is obvious that intellectual property rights are in demand!

Everyone knows that Halloween has something to do with pumpkins and ghosts. But what exactly is this event about, where does it come from? 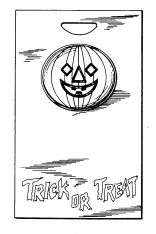 One root of the event probably lies in the Celtic festival of the dead in honor of the god Samhain at the end of October. For the Celts, the New Year began in November, so it is possible that the remembrance of the dead and the New Year's celebration merged. Another root is the Catholic festival in honor of all holy martyrs, which was established at the beginning of the 7th century. Originally celebrated in May, the pope in 835 placed All Saints' Day on November 1.

In Ireland, old Celtic traditions then merged with new Christian traditions: On the eve of "All Saints' Day" (or "All Hallows' Day") "All Hallows' Evening" or "Hallows E'en" for short was celebrated. The Irish Catholics maintained this tradition in distinction to the Protestant-anglican English occupiers, who celebrate Reformation Day on October 31. (This is, by the way, one reason why especially the Protestant Church in Germany is uncomfortable about Halloween - the Reformation Day is pushed aside by it).

From Ireland around the world 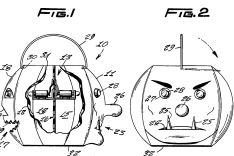 The countless Irish who emigrated to the United States in the 19th century brought the Halloween tradition to the New World, where it quickly became popular. By the 1990s at the latest, Halloween became increasingly popular in Europe, too - not least thanks to interested companies who wanted to open up new markets for Halloween products. Thus, Halloween is actually not an "imported" tradition in Europe but a re-import rather.

There is a wealth of patents with Halloween-related content. Most of them traditionally come from the USA, where the festival has been very important for long. With the increasing global awareness of the festival, however, the number of applications from other countries also go up. 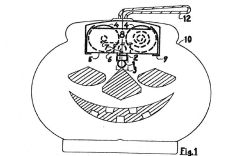 A typical Halloween patent is

CA1246037A ("Lantern candy carrier"): a battery-powered lantern that can be used by a child to collect sweets. The lantern has the shape of a classic Halloween pumpkin with a cut-out grimace (called "Jack O'Lantern"). This allows the child to see and be seen better when going door to door in the dark and shouting "Trick or treat!“, demanding sweets. Of course the lantern can also be used simply for decoration.

Similar lamps have been modified and registered from time to time for decades, see for example

US3250910A from 1963: an artificial pumpkin illuminated from the inside, which shows two creepy grimaces in a Janus-faced manner. 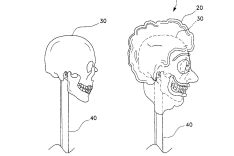 Technically not so sophisticated, but rather practical is the simple bag with the typical decoration

US258205S,which probably could carry more sweets than is good for the children…

But sometimes the candy itself is scary:

Dancing ghosts in the front yard 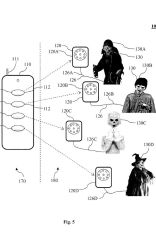 Decorative elements belong to every American front yard during the Halloween season.

CA3021652A1 ("System and method for controlling animated props") shows how to network them together: It plans to control various Halloween props with a remote control. „Each of the remote receivers is connected to the Halloween prop via an activation port of the Halloween prop, e.g., a try-me or step pad port.“ So if there are suddenly some unkempt zombies or creepy ghosts moving around in a front yard, then this patent is probably behind it.

Do you prefer a vampire or a skeleton? 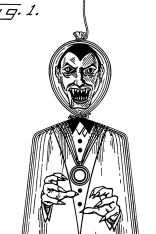 US332420S suggests a simple but very effective design. It needs no more than a balloon and a coat hanger to make a cloth with skeleton decoration eerily float. The design can be varied with a vampire (

US419910S) seems to be related to the latter, according to his grumpy, pasty face. 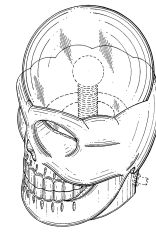 A normal pumpkin, which is hollowed out and provided with a cut-out grimace, has the disadvantage of rotting quite quickly.

US5811160 ("Carvable artifical pumpkin") has the solution: The body is formed from polyurethane and then "coated with an elastomeric coating, such as an acrylic material applied as a liquid". This artificial pumpkin is supposed to be carvable and can be decorated and illuminated as desired. 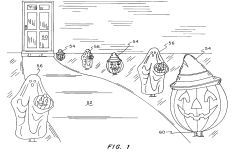 Because it's not far from Halloween to Christmas,

„A decorative lighting system uses a plurality of figurines, usually a family of characters appropriate for a specific holiday, such as: jack-o-lantern, ghosts, witches, black cats, skeletons, etc. for halloween or Santa Clause, candles, candy canes, reindeer, etc. for Christmas. (…) An adapter mounting plate enables the figurines to be substituted for fixtures on posts in a permanent ground lighting system.“ 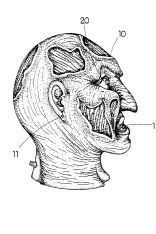 Halloween has features of a dark carnival, so masks are a popular area of development:

US6035447A is "a Halloween mask with flash device", which can „increase the attractive effect and the sense of reality for the mask but also can enhance the safety of the wearer by calling the attention and awareness of the vehicle drivers near the wearer“. This should work - every driver will flee if he sees this mask!

US6832392B2: „A costume safety mask housing chemiluminescent reagents. Upon activation, the reagents illuminate the mask or features thereon for purposes of novelty illumination and safety of the wearer. The mask may include liquid, viscous liquid, or solid chemiluminescent reagents that are held in cavities. Liquid components of the instant invention may be trans­ported through passageways in the mask to provide a flowing appearance.“ 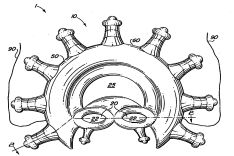 One of the masks is an early Halloween application from Germany: "Scherzartikel" (joke article) from 1984 (

DE8404835U1): The inventor's idea is to "position two luminous bodies directly in front of the eyes without obstructing the view, so that the changed person cannot be judged by the viewer. In this way, the surprise effect is achieved with astonishingly small means".

WO96/39058 ("Inflatable mask") sees a "need for a mask that is ornate and decorative, has a striking, three-dimensional appearance, but is still inexpensive and comfortable to use". This mask looks particularly creepy from today's point of view, as it is remotely reminiscent of an oversized corona virus. 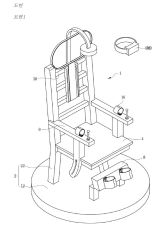 But there are also scary patents that have nothing to do with Halloween. Most oft them are games. For example,

KR1020200059421A, a "horror gaming system" with the goal of „linking with virtual reality and present a horror experience to gamers. " The game includes a "seat unit" for the user, which is modelled on an electric execution chair.

Another sinister game is sketched in

JP6074157B2 ("Game system"): „Generating or modifying game content before or while executing the game program, e.g. authoring tools specially adapted for game development or game-integrated level editor automatically by game devices or servers from real world data, e.g. measurement in live racing competition.“ According to the illustrations in the patent specification, it is quite gruesome. 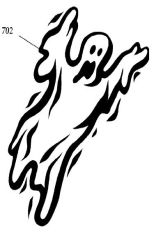 The big day of the pumpkin 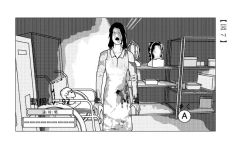 It´s clear to see: The (re-)imported tradition of Halloween inspires not only children and businessmen, but also the inventors.

Incidentally, farmers are among the beneficiaries: Pumpkin farmers have significantly expanded their fields in Germany in recent years (2008: 1640 hectares, 2018: 4150 hectares). The pumpkin harvest has more than doubled in the last decade: a good 78,100 tons of edible pumpkins were harvested in Germany in 2018. Many of them then decorate windows and doors as hollowed-out, candle-lit "Jack O' Lanterns" on the dark autumn nights.

A whole lot of horror fun everybody!