Anniversary of the Fraunhofer-Gesellschaft

The Fraunhofer Institute for Integrated Circuits IIS in Erlangen

70 years of research and practice

It is Europe's largest organisation for applied research - and one of the most active applicants at the DPMA: the Fraunhofer-Gesellschaft, which is now celebrating its 70th anniversary. In 2018 alone, the Society applied for 434 new patents at the DPMA. This puts it in 17th place in the ranking of the most important applicants.

It was a long way and it had a slow start: On 26 March 1949 – a Saturday at 10 a.m. - representatives of the state governments of Bavaria, Hesse and Württemberg as well as of science and industry meet at the Bavarian Ministry of Economic Affairs. At the ceremony, to which State Secretary Hugo Geiger invited, the 210 guests set up the "Fraunhofer-Gesellschaft zur Förderung der angewandten Forschung e. V." (Fraunhofer Society for the Promotion of Applied Research).

In its first few years, the society has primarily an administrative task: public funding, donations and members are to be made available for business-oriented research. Soon the acceptance of the Fraunhofer-Gesellschaft in (federal) politics increases: In 1951, the Ministry of Economic Affairs involves it for the first time in the allocation of research funds from the European Recovery Program of the Marshall Plan. 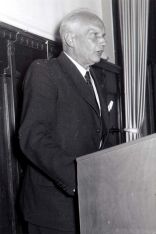 The tasks and working methods of the Fraunhofer-Gesellschaft are not defined clearly enough at the beginning. But the goal is to establish it as a third force in the German research landscape alongside the Deutsche Forschungsgemeinschaft (DFG) and the Max Planck Society (MPG). But this competition initially resists and plunges the young Fraunhofer-Gesellschaft into a crisis that threatens its very existence.

In 1954, the Fraunhofer-Gesellschaft fights for its survival; there are even rumours about its liquidation. However, thanks to financial and political support from the states of Bavaria and Baden-Württemberg, the society survives this difficult situation.

With the tailwind of the Wirtschaftswunder 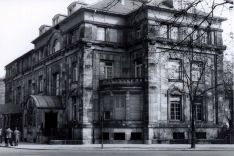 Initially, the Fraunhofer-Gesellschaft has of only a handful of permanent employees; most of its members work on a voluntary basis. Nevertheless, it claims to operate nationwide and to carry out research and development with its own capacities. On June 1, 1954, the first Fraunhofer Institute dedicated to applied microscopy, photography and cinematography is founded in Mannheim.

Soon the situation improves: there is a new spirit of optimism in the Federal Republic, the economic miracle unfolds, investments in research and development services increase. The Fraunhofer-Gesellschaft is also benefiting from this.

In 1955, it founds the Patent Office for German Research in Munich. It advises independent inventors, supports them in the exploitation of their inventions and mediates between science and industry. It was dissolved only in 2007, for tax reasons.

Support from the Ministry of Defense 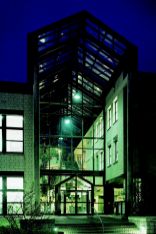 In 1956, society gains an important task, which was particularly useful during the difficult initial phase: defence research. Over the years, the Ministry of Defence has spent more than half of the organization's research budget. Ten years after its foundation, the Fraunhofer-Gesellschaft has nine institutes of its own. 135 employees generate a financial volume of DM 3.6 million.

But the strong commitment to defense research also causes trouble later on: in 1968, the time of the student unrest, it faces massive criticism. Over the next few years, the share of defense research in the total budget of the Fraunhofer-Gesellschaft gradually declines. In the mid-1970s it still accounted for a quarter, by the end of the 1980s it was only 10 percent. In 1976, at the insistence of the ministry, defence research was separated from the "civil" institutes and now, alongside contract research and service facilities, forms a separate service area of society. 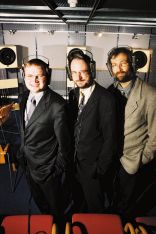 30 years after its foundation, the Fraunhofer-Gesellschaft has 27 research institutes. 2200 employees generate a financial volume of around 187 million marks.

In 1972, the "Fraunhofer model" of success-based financing is created, which demands a consistent market orientation of the research and development work of the society. The basic state financing now grows accordingly to the success of the acquisition in contract research.

In 1989, the Fraunhofer Institute for Integrated Circuits IIS

applied for a patent (0,95 MB) for a method of audio coding, which advances to probably the best known development resulting from Fraunhofer research. Almost ten years later, mp3 has established itself worldwide as the leading standard for music transmission on the Internet (

DE3912605B4 (1,14 MB)). Until 2017, the company will benefit strongly from license revenues. The Fraunhofer Future Foundation is founded from this ressources in 2008. Its task is to promote preliminary research in fields of technology in which patent clusters can be specifically established.

What about today? Today, more than 26,600 employees work at 72 institutes and research facilities under the umbrella of the Fraunhofer-Gesellschaft. The annual research volume amounts to more than 2.5 billion euros. The Fraunhofer-Gesellschaft earns around 70 percent of this amount with contracts from industry and with publicly financed research projects. The numerous inventions and trademarks resulting from these projects are, of course, well protected by the DPMA.