Can space debris be captured?

Imagine you are driving in your car through a city on a busy road and every few yards, unexpectedly, a dustbin comes rolling onto your lane of traffic. You have to evade each dustbin immediately and avoid jeopardising another road user. Does this sound unrealistic to you? Well, this is just about what is happening in space nowadays. When "Sputnik 1", the first satellite, was shot into orbit in 1957, you were on your own up there. You did not have to worry about space debris and its consequences.

More than 60 years later, it’s all happening in the orbit. "Space debris" is the key term. It indicates objects created by man, which are on their way in space and have become defunct, such as deactivated satellites, rocket debris or tools lost by astronauts. At a collision speed of about 25,000 miles per hour, fragments with just a diameter of half an inch develop a massive destructive power upon hitting another object. This can lead to a functional satellite being completely wrecked or to a space station and its astronauts being jeopardised. According to the German Aerospace Centre (DLR), about 750,000 objects with a diameter of over half an inch are circulating around the globe at an altitude of 500-560 miles. Experts assume no less than 150 million fragments with a size of slightly above 0.04 inches to be orbiting earth. Around 20,000 objects have so far been catalogued using the latest laser technology; they are larger than four inches and are being monitored regularly.

DPMA Erfinderaktivitäten (inventor activities): How to dispose of waste in space? 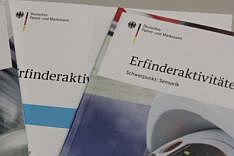 On the occasion of "International Day of Human Space Flight" on 12 April, this topic is being focused on. This day is also a good opportunity for the German Patent and Trade Mark Office (DPMA) to draw attention to its own publication with the same subject. The DPMA publishes a regular series of articles in its magazine "Erfinderaktivitäten" (inventor activities), taking the reader "on a varied journey through different areas of technology of today and tomorrow". The DPMA's patent examiners examine patent applications and highlight remarkable inventions, which they illuminate in detail in their series of articles. The latest edition of 2016/2017 is dedicated to the article "Beseitigung von Weltraummüll" (Disposing of space debris) and focuses on possible solutions to empty space again – at least to a certain degree.

Of course, for space, too, people have realised that the best waste disposal is waste prevention. As a consequence, nowadays, modern satellites are being built in such a way that at the end of their period of service and on re-entry into the earth's atmosphere, they vaporise entirely. Moreover, intelligent software programmes help prevent satellite collisions by warning satellite providers in time. Satellites can evade objects – preventing a collision that would create dozens of additional broken small fragments.

Modern satellite technology does not solve the prevailing problems, though. The measures you can take to dispose of century-old waste, as described in the DPMA article, partly seem to originate from a science fiction novel. However, all processes and devices introduced in the article are serious inventions, which can be well realised depending on the cost situation. The simplified formula that science has found for orbit is: graveyard or destruction by vaporisation or capturing. Especially the latter seems to come directly from a James Bond movie scene. However, it is everything but fiction.

Catching bowl, fishing net or gas cloud – obviously, there are many possibilities 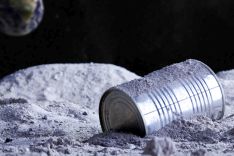 First of all, the size of an object is crucial for space debris removal. If you have entire satellites with a known position, you can capture these satellites and cart them off. To do so, you can use disposal satellites with electric catching bowls. Other devices take advantage of a harpoon, which pokes into the target object and wedges inside of it. Different catching devices are using grapplers or – even easier – simple steel ropes with weights fixed to their ends. The ropes wrap around a satellite until you get hold of it. Even entire space crafts can disappear with the help of a fixation equipment inspired by mother nature. It is a device with "quite a number of the finest tiny hairs, similar to the tiny adhesive hairs of geckos by means of which they stick to smooth surfaces".

The "graveyard" method counts on relocation. This means that micro satellites dock with a defunct satellite, hauling it to a new location: either to an orbit further away from the earth and with very little traffic or to an orbit significantly closer to the earth in order to slow down the satellite there and let it vaporise in the earth's atmosphere. An alternative invention provides that you locally slow down the satellite's speed using inflatable balloons fixed to the defunct satellite via micro satellites. The large balloon surface would cause a respective air friction, which would slow down the satellite, relocating it to the earth's atmosphere and letting it burn up there.
Last but not least, there are patent specifications aiming at the destruction of objects. While one process relies on focused sun light for vaporisation of a debris segment using an optic that unfolds, another process also describes irradiation of an object, but this time with the use of a "radiation for debris material vaporisation".

Disposing of the smallest objects – nothing is off limits

The position of smaller objects in orbit is nearly unknown. However, they need to be disposed of, too. Contrary to catching or letting burn up single objects, large-scale cleaning facilities are used for small fragments. For example, a space power sweeper made of extensive rotating tiles can be used or a large-scale catching facility with the shape of a ball of thread. Positioning an over-dimensional version of a fishing net in orbit, which takes up all small fragments, is an additional approach.

A different but nonetheless interesting method involves the “deceleration of high speed fragments”. Using liquid droplet, an intentional collision of the smaller objects is provoked. Thereby, the small parts are being fragmented and slowed down. Alternatively, after being fragmented, parts are incorporated in the inside of a foam sphere, get combined and then removed.

The processes and facilities described above were aimed at docking with and catching the debris fragments themselves. However, there are also other approaches such as suggesting changing the environmental conditions of satellites and fragments so that they can be disposed of. In this scenario, a dispensation space ship dispenses a second medium at the operating site – for example, in the form of a gas cloud or a dust cloud. Each space debris passing through this cloud would be slowed down and sent floating towards the earth’s atmosphere where it would burn up.

The universe is infinite, but possibilities of space debris removal are limited. However, it is well-known that inventor spirit does not know any boundaries. Other possible devices to remove debris from the orbit are detailed in the full report "Beseitigung von Weltraummüll"(Disposing of space debris) in Erfinderaktivitäten 2016/2017 from page 34 on. You will also find references to all patent specifications, which you can view via the DPMA database DEPATISnet.