At the iENA 2019, inventors once again present their developments – the DPMA is providing assistance and information

Iris-Sabine Langstädtler wants to cause a sensation on the bicycle market with an invention that she also owes to her customers. People came to her bike shop in Bremen complaining of all kinds of physical problems, she says. Pressure sores, buttock pain, numbness: Again and again, they were complaining about problems with conventional saddles. As a passionate horse rider, Langstädtler had an idea that there were other ways. Her theory is that free hip movement is the key to relieving ailments. And so she invented the "Freibeikgelenk".

The core of the invention is an adapter between saddle and seat post that allows free and cushioned hip movements in any direction while riding a bike. In early 2016, Langstädtler applied for a patent for it at the German Patent and Trade Mark Office (DPMA). She says that she wants to launch the "Freibeikgelenk" on the market in the coming year. This year she has made a major public appearance as an exhibitor at the iENA inventors’ fair in Nuremberg (31 October to 3 November).

Ideas, inventions, new products – for 71 years the fair has been a place to admire them. For decades, the iENA has been the top event, above all, for free inventors independent of industry and small businesses. In addition to industry and science, they were “a very important part of our innovation landscape,”, said DPMA Vice-President Christine Moosbauer at the opening of the fair. Here at the iENA, they had the great opportunity to make their developments known and to market them, she said and added: “This is where inventors meet licensees.” 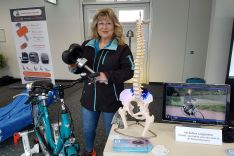 Once again this year, around 800 inventions are on display at the fair. A multifunctional tool for mathematics classes, a windscreen wiper cleaning device, a safety-optimised heating element for home aquariums – ideas from a great variety of fields.

The DPMA has taken a closer look at the independent inventors at this year’s iENA. In 2018, the office received slightly more than 2,800 patent applications for which the applicant and inventor were identical. One in four of these applications came from Bavaria. With a female proportion of 7.1%, independent inventors are slightly more likely to be female than the overall group of German inventors at the DPMA (5.8% are women). They are active in all technology sectors – most active in mechanical engineering like the overall group of inventors (40% of the “independent” applications). 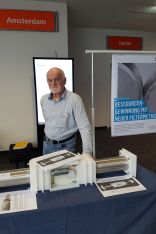 The oscillating membrane filter technology developed by Edmund Erath from Gaggenau shows that visionary applications can sometimes be found here. In March 2016, the 74-year-old, who has long since retired from work, applied for a patent for his process at the DPMA. The process can be used, for example, to filter hydroxides or metal oxides out of waste water, press them into pellets and then recycle them as valuable raw materials. A contribution to environmental protection and resource conservation, for which Erath was awarded the Artur Fischer inventor prize this year. In the meantime, a university institute is developing the concept further. Erath is also present at the iENA.

Especially for inventors who have not quite reached that stage and need information on all aspects of filing applications for patents, utility models, trade marks and designs, the DPMA again has a large stand at the fair this year. In addition to the experts of the DPMA, visitors can also meet experts from the European Patent Office, the European Union Intellectual Property Office and the World Intellectual Property Organization. Patent attorneys are offering consultations for first-time inventors. In addition, the Federal Ministry of Economic Affairs and Energy advises on funding opportunities under the WIPANO programme (knowledge and technology transfer via patents and standards). One or two visitors to the stand are likely to become exhibitors themselves in the coming years – like Iris-Sabine Langstädtler and Edmund Erath.