DPMA Information Day for Founders with Migration and Refuge Background

According to studies, citizens with foreign roots often set up companies and increasingly contribute to technical innovation. In Munich, the DPMA now hosted an information day - and met guests with ambitious plans.

Pouya Sojoudi is already on the market with his company. The Iranian-born Pouya Sojoudi founded his "Hash-Tech UG" two years ago: The engineer wants to develop applications for artificial intelligence - "probably something in the nursing sector, where the shortage of skilled workers is particularly great", reveals Sojoudi. He has been in Germany since 2012 and studied at the Technical University of Munich. His Iranian co-founder will also be coming to the country soon. The medical technology engineer already brings entrepreneurial experience, several publications and at least three patents into the company, says the founder. But of course there will be more to come. This is one of the reasons why Pouya Sojoudi came to the Social Impact Lab on Balanstraße in Munich on this day. 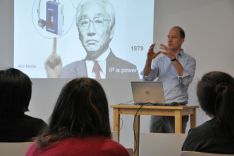 Informing migrants and people with a refugee background about intellectual property and advising them about funding opportunities for their start-up - this was the aim of an information day organised by the German Patent and Trade Mark Office (DPMA) with the Economic Department of the City of Munich and the Social Impact Lab on 12 March as part of the VIP4SME project (Value Intellectual Property for Small and Medium Enterprises).

Experts from the DPMA Information and Service Centre Berlin (DPMA-IDZ) informed the guests about the importance of patents, utility models, trade marks and designs. On the one hand, it is important to consistently protect one's own intellectual property right from the start. The DPMA staff recommended this in order to increase the value of the company. On the other hand, one has to know when one was infringing the rights of others in order not to risk penalties and unnecessary costs.

A speaker from the City of Munich explained which municipal support offers there are for migrants and what foreigners from non-EU states in particular have to take into account. The Social Impact Lab presented offers specifically aimed at fugitives.

By no means all the listeners have already reached the level of Pouya Sojoudi yet. Some came with initial ideas and had very fundamental questions: Why is the term of protection limited for patents, but not for trademarks? Can I also protect the design of my website? And who can help me with translations? A first sensitization to the possibilities of starting a business.

Data from the KfW Start-up Monitor show that migrants in Germany are more likely to set up businesses than the average population. On the one hand because their desire for self-employment is more pronounced, on the other hand because they tend to have worse chances on the labour market. They take a proactive approach to their business start-ups and invest more weekly hours in their start-up projects than the population average.

A recently published study by the Institut der deutschen Wirtschaft in Cologne also suggests that migrants in Germany are making a growing contribution to technical innovation. In 2016, 9.4 percent of patent applications from Germany came from inventors with foreign roots. In 2005, the figure was only 6.1 percent.

With his qualifications as a robotics engineer, Pouya Sojoudi would have no problems on the labour market, especially since he now has German citizenship. Before he founded his company, he was employed by BMW. But his independence simply appealed to him: "I'm an entrepreneur by type, it's just great fun.”