Sledge patents once and now

Sledges have been known as a means of transport for thousands of years, especially in snowy regions. In the 19th century, „rodeln“ was discovered as a leisure activity as part of the emerging Alpine tourism. As its popularity grew, more and more new variants of sledges emerged. The primitive vehicle became a versatile fun instrument with a wide variety of designs. Numerous patents were registered, especially around the turn of the century. Not surprisingly, most of them came from the Alpine tourism core countries of Austria and Switzerland.

The classic „Hornschlitten“ (horned sledge) was originally used in the mountains to transport felled trees - a difficult and extremely dangerous job. Many a lumberjack had an accident when he had to manoeuvre his vehicle, loaded with logs weighing several tonnes, down into the valley.

Even today, sledging is not completely safe: each year, winter sports resorts record hundreds of injuries, sometimes even fatal accidents. Yet the safety of the sledge was a priority from the very beginning in the development of this modern recreational device.

What is the best way to brake? 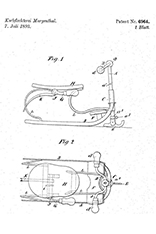 CH6964, the "steerable sledge" for which a patent was filed in 1893, not only anticipates the shape of modern ski bobs, but also has an effective hand brake. Elevated seating position, ergonomic handlebars and shapely design: this sledge is visually almost reminiscent of a Vespa. "By means of this sledge, easy and safe steering and swerving is possible," says the applicant, the Murgenthal basket weaving company from Aargau. Another advantage is that "this sledge avoids the problem of scratching one's feet on the runway, which spoils clothes and shoes and can easily give rise to colds". 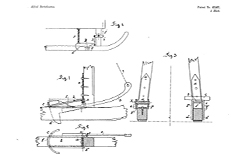 CH41507, registered in 1908, also concentrates on safe braking: "Hemmvorrichtung für Schlitten" (braking device for sledges) by Alfred Bertsohmann from Basel is "characterised by the fact that a spur-armoured shoe is hinged to a holding element to be fixed to a sledge, the spur of which is intended to be driven into the track". 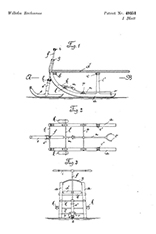 CH49351 from 1910 takes up the basic idea from CH 6964: The "sledge with steering and braking device operable by one and the same person" has a steerable front skid and provides "that the braking device can be operated by the action of the rider's feet on a lever system forming the braking device and installed in the lower part of the sledge". 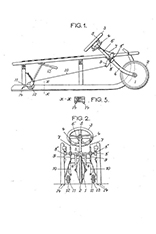 CH66019 from 1913 also uses a braking system, but surprises with a steerable front wheel instead of a skid. Inventor Jaroslav Charfreitag from Bohemia saw his sledge "characterised by the fact that each sledge runner is provided on the two lower longitudinal edges with rails of semicircular cross-section, which decrease in height from the rear to the front until they merge into the lower sledge runner surface, the rails being made of metal to which the snow does not stick, which does not rust and which has a low sliding friction on snow and ice". 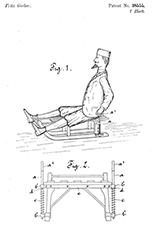 CH38555 from 1907: inventor Fritz Gerber envisages spring-loaded bars that can be pressed down into the snow as required. These are attached to the rear end of the runners because it is "a well-known fact that the front end of the sled is always much less loaded than the rear end, and is often not in contact with the latter at all due to the unevenness of the sled track, so that the steering and braking elements very often do not have the desired effect or do not take effect at the appropriate moment".

In retrospect, it can be said that - with the exception of children's bobsleds - sleds with brakes did not become established, despite all these ideas. Steering and braking is still the task of the feet when „rodeling“ today.

How do you get uphill? 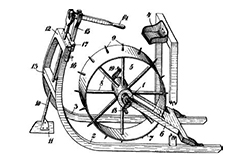 Sledges only go downhill. That's why the pioneers of sledge patents were thinking about how the vehicle could get uphill too.

The "sledge with cleated wheel drive" (

AT59908) - if it worked at all - was certainly a sweaty affair for the user: In 1911, inventor Johann Schönthaler from the then Austrian Bukovina envisaged a massive thorn-armoured roller that was driven by a foot pedal. "The cleated wheel axle is mounted in the forked front end of a swing arm and carries the pedal cranks, so that by changing the pedalling force the contact pressure of the wheel against the road surface can be altered to take account of the unevenness of the road". 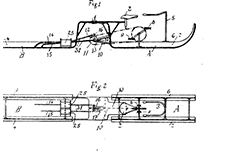 AT18871B is even more doubtful about its suitability for everyday use. The "drive device for sledges", which the Upper Carniolan Ivan Cop registered in 1903, also relies on a pedal drive. "The free ends of the skewers, which are hinged to a sliding shoe, are lifted out of the terrain under the influence of a tension spring and are constantly pushed forward by a compression spring acting on the sliding shoe, while a second sliding shoe, which receives its movement from the rear wheel crank through connecting rods, presses the ends of the skewers into the ground against the action of the two springs and then pushes them back, which causes the sledge to move forward". 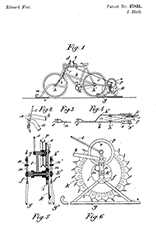 From a sledge with pedal drive to a bicycle with runners: "A vehicle that can be used as a bicycle and as a sledge" is what Eduard Frei from Rapperswil called his design from 1906.

CH37831 provides "that slide rails are arranged on a bicycle so that they can be engaged and disengaged by means of levers and that a pressure roller that can be switched on and off is connected by gearwheels to a paddle wheel for the purpose of engaging and disengaging the slide rails by lifting or pressing down the levers and transmitting the rotation of the rear bicycle wheel to the paddle wheel". 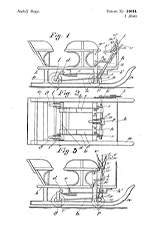 Today we would probably also call this hybrid vehicle

CH36014 : "Sledge usable as a carriage" by Rudolf Bopp from Rüschlikon, registered in 1906, "is a sledge with wheels lying between the runners and a lever linkage which is suitable for adjusting the wheels so that they project downwards beyond the runners, for the purpose of being able to use the sledge temporarily as a carriage". This principle is still used today in tourist horse-drawn sleighs in winter sports resorts, where wheels can be quickly "switched on" for crossing roads, for example. 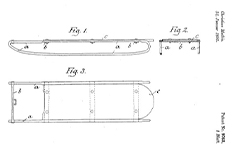 Even in the early days of Alpine tourism, sledges were designed that still have a modern look today.

AT21427 for example, registered in 1904, stipulates that the entire sledge consists of "a single, suitably bent, exquisitely seamless steel tube". The ends of the tube form the characteristic horns.

Ancestor of the Ski-doo 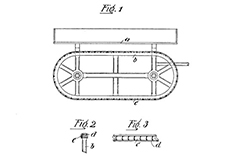 Edouard Gfeller applied for a patent for one of the first tracked sledges in 1908: "Road vehicle usable as sledge"(

However, there is no concept for a power unit in the extremely brief patent specification; there is only talk of an articulated chain that "moves around the sledge runners during the journey". It was not until decades later that snowmobiles with chain drive became marketable.

One of the pioneers was the Canadian Joseph-Armand Bombardier, for example with his application "Chain tread vehicle" ( 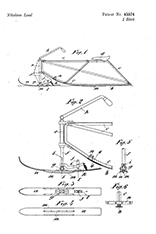 CH45574. In 1908, the Hungarian Nikolaus Lezl applied for a patent for a sledge "in which the runners are not arranged parallel to each other, but in a line behind each other, in contrast to the sledges used up to now, whereby the front runner can be rotated and thus makes it possible to steer this single-track sledge". It is the progenitor of all those fun companions known today as "snow-bike", "ski-bob" or "sit-ski".

In Switzerland, however, Christian Bühlmann-Balmer is considered the father of the "Velogemel", as the ski bobs are called in the Bernese Oberland. However, the man from Grindelwald did not register his "single-track steering sledge" with the Federal Patent Office until 1911 ( 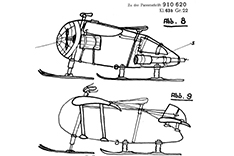 Georg Gfäller from Kiefersfelden later also developed a single-track sledge (DE899591B), but revised his approach to a "sledge with one main runner and two steerable front runners", which he applied for a patent in 1952 (

DE910620). The track of the front runners is adjustable: the fork, which sits on the steering tube, can be extended sideways and carries telescopic springs at its two ends, which are hinged to the front runners. Curiously, Gfäller suggested that this sled could also be equipped with rocket propulsion, wings or water skis. A popular innovation on the toboggan market was filed with the DPMA in 1968: "sledge-like rodel runner" by Johann Uttenthaler (

DE1605877). In the centre of it there is "a saddle-nose-like support hump extending upwards between the thighs of the user, the upwardly tapering part of which forms a holding, braking and control stick with its axis inclined obliquely forwards". The inspiration is said to have been a coal shovel on which one can slide downhill, handle first. The little slide was named "Zipfelbob" after this control stick. It went into production in 1976 and is still popular today, especially (but not only) with children. 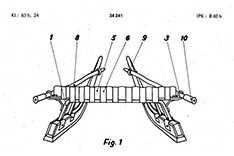 Although there are Zipfelbob races, the plastic sled is not (yet) Olympic - unlike the luge, which has long been part of professional winter sports. The highly rigged equipment has the basic two-runner structure in common with the classic sled. In the case of the luge, however, the runners in the front part are not rigidly connected to the seat frame but are movable and can therefore be steered by means of pressure from the feet.

The blueprint for a modern luge, "whose superstructure ensures good adaptation of the runners to all ground conditions through great mobility and elasticity", was patented in the GDR in 1963:

DD34241 describes a "luge with movable runners, characterised in that on the rear steel trestle creped lugs are adjustably arranged by means of a fastening screw and serve as the only rigid support for elastic spars, preferably of glass fibre, which are further movably introduced by means of supports with a closed ring on the front steel trestle and eyelets on the front end of the runners".

New ideas for an old vehicle 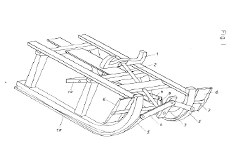 In principle, a sledge is a very simple piece of equipment. But still, new details and variations are invented again and again until today. A few examples:

CH699428 from 2009 proposes to mount carving skis under the runners. The "sledge with speed-independent carving control" is "a technically flawless solution for cleanly controlled cornering without loss of speed due to pushing of runners or one-sided braking". To the many ideas for children's sleds,

CH700370B1 (2009) adds another: a seat and grab bar are mounted on a snow gliding board. "The sledge is suitable for groomed slopes as well as deep snow skiing. … This sledge is also well suited for pulling children." 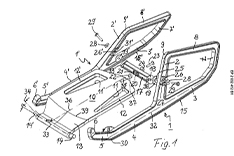 DE102006024926) is a vehicle with which "in particular curves can be made in a controlled manner without any major loss of speed and changes of direction, fluid and rapid, as in skiing or snowboarding". This is to be achieved by articulated connections of the components.

WO97/18118). According to the application, it "is both comfortable and can be easily and safely operated by any group of people". In practice, children also love it because of its secret compartment under the seat, in which up to three snowballs fit! 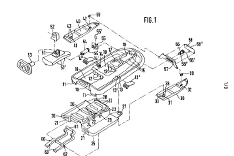 So much for a small selection of sled patent applications from the last 130 years. It is astonishing that by far the majority of sledges in use today are simple "classic" wooden sledges of traditional Davos or round-horn design, whose construction has practically not changed for decades. Whereas the market is virtually thirsty for innovations in other leisure equipment such as skis or bicycles, the majority of sleds remain the same as ever.