Munich. The President of the German Patent and Trade Mark Office (DPMA), Cornelia Rudloff-Schäffer, heartily congratulates Prof Karl Leo, a physicist, on winning the European Inventor Award. “Karl Leo is a brilliant technology pioneer,” said the DPMA President, adding: “With his OLEDs he made a previously underestimated technology useful for industrial application, thus contributing to the development of high-tech products such as smartphones and flat screens in their present form. Inventor-researchers like Karl Leo are vitally important for the success of Germany as an innovation hub.” Karl Leo was recognised in the “Lifetime achievement” category for his inventions concerning the production of highly efficient organic light-emitting diodes (OLEDs).

The method developed by Karl Leo, known as doping, involves adding electron-producing substances to organic semiconductors in order to increase their conductivity. This new method has fundamentally changed the electronics industry and led to improved products for millions of people. The OLED technology makes electronic displays brighter and allows higher colour resolution. Furthermore, it is more energy-efficient than other technologies.

Karl Leo: born in Freiburg, professor at the TU Dresden 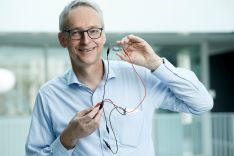 Karl Leo was born in Freiburg im Breisgau. Since 1993, he has been a professor of optoelectronics at the Technische Universität Dresden, where he is now also the director of the Dresden Integrated Center for Applied Physics and Photonic Materials, an interdisciplinary institute. Karl Leo is also a co-founder of several companies and was awarded national and international innovation prizes – including the Deutscher Zukunftspreis award, the Federal President’s Award for Technology and Innovation, in 2011.

Other German researchers were among the finalists in different categories, but were not selected as prize winners by the jury:
Dr Christoph Gürtler (Covestro Deutschland AG, Leverkusen) and Prof Walter Leitner (Max Planck Institute for Chemical Energy Conversion, Mülheim an der Ruhr) were shortlisted in the “Industry” category – at the suggestion of the DPMA. They have developed a technology for using carbon dioxide as a component for high-quality plastics. Just like oil, the gas contains carbon, so it can partially replace oil in plastics production – e.g. for the production of mattresses, sports floors, textile fibres or insulants – thanks to the new method. Dr Metin Colpan, co-founder of the biotechnology company QIAGEN was nominated – also in the “Lifetime achievement” category – for his inventions concerning the separation and purification of nucleic acids. The process allows the cost-efficient isolation of highly pure DNA without toxic chemicals and was a milestone in biotechnology.

“The European Inventor Award honours the most outstanding international innovators,” said DPMA President Rudloff-Schäffer, adding: “I congratulate all prize winners and the finalists on this recognition.”

As usual, the European Patent Office presented the award in the five categories Industry, Research, Non-EPO countries, SMEs and Lifetime achievement and also awarded the

Popular Prize. This year’s ceremony was held as a digital event.