“Flagship project” of the federal government marks its 10th anniversary

Electronic IP case file of the German Patent and Trade Mark Office (DPMA) is the first workflow-based e-file system in German public authorities – Federal Minister of Justice and Consumer Protection: The DPMA is a pioneer in e-government – DPMA President: Digital operation has kept our office fully operational during the pandemic

Munich. Around 500,000 examination and registration procedures concluded, almost 60 million processes handled and more than 76 million documents saved: The current performance figures of the electronic IP case file for patents/utility models speak for themselves. On 1 June 2021, the German Patent and Trade Mark Office (DPMA) will celebrate the 10th anniversary of its fully electronic processing system – and thus a milestone birthday of the first fully digital, workflow-based e-file system on this scale in German public authorities. “Ten years after its launch, the electronic IP case file is still an outstanding flagship project of the federal administration,” says Christine Lambrecht, Federal Minister of Justice and Consumer Protection. The DPMA operates within the portfolio of Ms Lambrecht’s ministry. “The DPMA saw the challenges of digitisation at an early stage and, with its high-performance IT systems, is a pioneer in e-government.”

Thanks to the electronic case file system, the processing of patent and utility model procedures is fully digital and without any format discontinuity – from the application to the processing by the examining sections and administration units to the electronic transmission of decisions and official communications. Connected to the system via DPMAdirektPro, an interface, customers can both make electronic filings and receive replies and ultimately decisions and official communications from the DPMA in a digital format. The digital workflow internally ensures that the electronic case file is transferred exactly where the next action has to be taken.

“Especially during the coronavirus pandemic, we benefit from our fully digital operation,” emphasises DPMA President Cornelia Rudloff-Schäffer. “Our digital workflow allowed most of our staff in the IP areas to immediately and permanently work from home. This has helped us avoid risks of infection and be fully operational all the time.” In addition, this saves the DPMA vast amounts of paper.

This form of digital IP case file is still internationally unique too. “No other patent office has so far been as consistent in processing its IP procedures digitally as we are,” emphasises the DPMA President. 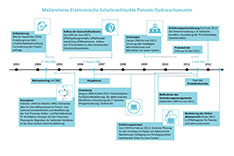 On 1 June 2011, the system went live. Sabine Leutheusser-Schnarrenberger, the then Federal Minister of Justice, called it a “flagship project of the federal government”. Several months later, at the National IT Summit in Munich, Chancellor Dr Angela Merkel was the first to use the possibility of online file inspection.

The basis for this was a long project carefully planned together with a major software group. Business processes had to be designed and implemented in the IT systems for the electronic workflow. Horizontal services, such as for address and user data and payment services, were redesigned and connected via electronic interfaces. Concepts to migrate all files to the new system were developed. And it goes without saying that, ultimately, countless tests were conducted, deficiencies remedied and training provided to the staff. Furthermore, a two-year scheme under the direct responsibility of the office’s senior management was established to ensure acceptance of the changes by the staff.

More information ob this project can be found in Background.

The DPMA’s highly qualified IT experts have since been developing the complex system with its more than 5 million lines of code further and make sure it is operational. An availability of the system of up to 99.8% during the core working hours means that the DPMA is at the same level as highly professional IT service providers.