New visualisation system nominated for the Zukunftspreis award at the suggestion of the German Patent and Trade Mark Office – DPMA President: More people could benefit from high-performance medicine 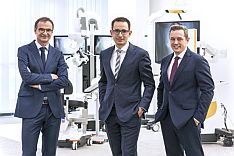 Munich. Robotics meets high-performance medicine: KINEVO 900, the new robotic visualisation system of Carl Zeiss Meditec AG in Oberkochen, has been nominated, at the suggestion of the German Patent and Trade Mark Office (DPMA), for the 2020 Zukunftspreis, the Federal President’s Award for Technology and Innovation. “I am very pleased that the jury has adopted our suggestion,” said DPMA President Cornelia Rudloff-Schäffer. “The new system offers increased precision, safety and efficiency where these characteristics help save human lives: in the operation theatre. With more efficient processes and thus decreasing costs, there is hope that more people worldwide will benefit from high-performance medicine in the future.” The DPMA President is a member of the board of trustees of the Deutscher Zukunftspreis, which defines the guidelines for the award. The developers of the KINEVO 900 system, Dr Michelangelo Masini, Frank Seitzinger (both of Carl Zeiss Meditec AG) and Prof Andreas Raabe (Department of Neurosurgery at the Inselspital Bern, Switzerland), will today present the new visualisation system at the Deutsches Museum in Munich. Two other teams are on the shortlist for the Zukunftspreis award.

According to Carl Zeiss Meditec AG, the technology of KINEVO 900 has so far led to 181 developments for which patent applications have been filed. Compared to existing surgical microscopes, KINEVO 900 introduces three important innovations:

In complex surgeries, such as brain or spine surgeries, surgeons have so far had to position the microscopes to the relevant sites of the body and align them by hand. This requires a significant part of valuable operating time. The robotics integrated into the new development, however, allows microscopes to be adjusted automatically. In addition, the system saves relevant settings and thus allows automated positioning of the microscope to important areas.

Moreover, KINEVO 900 extends the visual possibilities: First, surgeons can examine, as before, the operation site directly through the ocular, but also as a digital ultra-high definition image on a monitor. This facilitates more ergonomic working, especially in long surgeries. The images can also be transmitted live to other monitors, so members of the operating team or observers can see them. In addition, KINEVO 900 also integrates functions of intraoperative diagnosis which also allow fluorescence signals to be detected. For example, this increases the detectability of tumours.

In addition, the new system provides a tool for microinspection: With conventional surgical microscopes, you can only see what is in the line of sight. Thanks to the new system, you can examine areas that are actually hidden behind other tissue. The increased visibility of these areas facilitates intraoperative corrections and helps reduce follow-up operations.

The second team of two companies and one university nominated for the Deutscher Zukunftspreis has developed a new, sprayable insulating material for facades for the energy-efficient insulation of buildings. Tiny, water-insoluble glass bubbles enhance the insulation capacity. This new material is very easy to use and versatile; in addition, it is very resource-friendly and eco-friendly. Because of the high energy consumption in buildings, thermal insulation is considered an important challenge in the fight against climate change. The development was presented by Friedbert Scharfe (Franken Maxit Mauermörtel GmbH & Co, Kassendorf), Prof Thorsten Gerdes (Keylab Glass Technology at the University of Bayreuth) and Dr Klaus Hintzer (3M Central Europe Region, Burgkirchen).

The third team presented a manufacturing technology that takes the production of microchips to a new level: EUV lithography. EUV means “extreme ultraviolet” light with an extremely short wavelength. This allows more powerful, more energy-efficient and more cost-efficient microchips to be produced than has been possible before. Carl Zeiss SMT GmbH in Oberkochen, TRUMPF Lasersystems for Semiconductor Manufacturing GmbH in Ditzingen and the Fraunhofer Institute for Applied Optics and Precision Mechanics IOF in Jena worked together to develop this technology, which was presented by Dr Peter Kürz (Carl Zeiss), Dr Michael Kösters (TRUMPF) and Dr Sergiy Yulin (Fraunhofer).

The winning team of the 2020 Deutscher Zukunftspreis (the Federal President’s Award for Technology and Innovation) will be selected by the jury on November 25th. The Federal President, Frank-Walter Steinmeier, will award the prize in the evening on the same day.

Inventiveness and creativity need effective protection. The DPMA is the German centre of expertise for all intellectual property rights – patents, utility models, trade marks and designs. As the largest national patent office in Europe and the fifth largest national patent office in the world, our office stands for the future of Germany as a country of inventors in a globalised economy. Its staff of just under 2,800 at three locations – Munich, Jena and Berlin – provide services for inventors and companies. They implement federal innovation strategies and develop the national, European and international IP systems further.