Bremen/Munich. InnoWi GmbH, the long-standing patent exploitation agency of the universities in the federal Land of Bremen, will assume the tasks of a patent and trade mark centre for the entire Land in the future. It thus becomes an official cooperation partner of the German Patent and Trade Mark Office. As a result, InnoWi will also provide companies and people starting up in business with central expert advice and support in the field of IP rights.

The state universities in the Land of Bremen have decided to restructure their company InnoWi to become a patent and trade mark centre. This created a smooth transition from the former Patent- und Normenzentrum (PNZ) at Hochschule Bremen (City University of Applied Sciences) to the new organisation. Since 1983, the PNZ centre at the Neustadtswall location of Hochschule Bremen has been the contact point for companies and inventors with questions about IP rights and about their own search. InnoWi, in turn, is the point of contact for scientists in the region when it comes to assessing their inventions, assisting with patent applications and marketing patents. Now their fields of expertise are being brought together in one centre and the services are being expanded. “The aim is to provide a one-stop shop, offering and expertly implementing a complete service package, from patent protection to patent exploitation, for the University of Bremen and the universities of applied sciences in the Land of Bremen, as well as for science institutes in the region,” says the Director of Finance and Administration of the University of Bremen, Dr Martin Mehrtens. The President of Hochschule Bremen, Prof Karin Luckey, adds: "Patent applications are a reliable indicator of the innovative strength of an economy. Universities play a significant role in this area. I expect that restructuring will have further synergy effects for our Land because cooperation with InnoWi GmbH is already excellent."

IP rights have a long tradition in Bremen: The first marketable screw-in stud football boot was invented in Bremen, Carl F. W. Borgward, an inventor with numerous ideas and patents, was the founder of the automobile industry in Bremen, the patented decaffeinated coffee by Kaffee HAG became the basis for coffee processing, and Bremen brand names such as Jacobs, Beck’s, Hachez and others, protected by trade marks, are world-famous. Even today, scientists and established companies, but also young, innovative businesses develop impressive ideas and turn them into reality. However, the correct handling of IP rights has always been the basis for further success. This requires good support.

Currently, more than 20 regional patent information centres throughout Germany providing comprehensive information on IP protection are recognised cooperation partners of the German Patent and Trade Mark Office (DPMA). As one-stop shops for services in the field of IP protection, they support businesses, science and start-ups in identifying, using, monitoring and managing patents, utility models, trade marks and designs and in preventing infringement of third party rights. This makes them important figures in the German innovation landscape.

A recently signed cooperation agreement between InnoWi and the DPMA is the basis for future cooperation. This means that InnoWi assumes the role of a recognised partner of the DPMA, adding to its central range of services in the region of Bremen and north-western Lower Saxony. “We are pleased that InnoWi GmbH, a powerful organisation, has joined our network of regional partners. This helps us to ensure that companies, universities and independent inventors in the Bremen region will remain well supplied with information on intellectual property and our services,” says DPMA President Cornelia Rudloff-Schäffer.

More than 95% of all companies in Europe are small and medium-sized enterprises with fewer than 250 employees. They even account for 99.6% of companies and for just under 60% of the total workforce in Germany. This makes them the most important economic driver of our country.

For almost two decades, InnoWi has been providing support in the field of IP rights and their exploitation 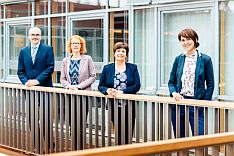 InnoWi GmbH has been supporting scientists in the region in all aspects of IP rights and the exploitation of IP rights since 2002. The team specialises in the assessment of inventions, IP search and IP marketing. “Currently, we provide support with respect to 170 patents and patent applications from the scientific community. This means that the universities are among the largest patent applicants in the Land of Bremen,” explain Lieselotte Riegger and Jens Hoheisel, the two InnoWi managing directors.

For three years, InnoWi has also increasingly been advising small companies and people starting up in business on questions of IP rights. The first measures were funded by the European ERDF funding programme. Upon conversion into a patent and trade mark centre, the Land of Bremen takes over further funding in the corporate sector.

Lieselotte Riegger and Jens Hoheisel and their team are now looking forward to the new challenge: "In the coming years, we will be making every effort to provide the best possible support to all those who have good ideas and want to implement them. To this end, we offer individual consultations as well as events and in-house training."

In future, the information centre will be available from Monday to Thursday from 10.00 to 15.00 and on Friday from 10.00 to 12.00. Those seeking advice will receive guidance on all IP questions. The InnoWi team also offers assistance in IP searches, for which a separate search room is available. However, currently only online assistance is available. Contact InnoWi at mail@innowi.de or 0421-960070.

Photographs of the InnoWi team are available at

https://www.innowi.de/bilder/pm2020-12
If you are interested in photographs and stories about past or present inventions “Von der Weser in die Welt” (From the Weser river to the world), please get in touch with the contacts below.