The bulletproof fibre from the chemistry laboratory

Exactly 50 years ago, on 22 November 1968, the German Patent Office received patent application DE 1810 426 with the designation "mass and fibres or threads made from it". What is described in the

Offenlegungsschrift (13,37 MB) – the first publication of the patent application, in German - on 144 pages is a super fibre, five times as strong as steel. The material is still used today, for example, in aerospace industry, in aircraft construction and also in bulletproof vests and it has saved the lives of many people. The underlying technology was invented by chemist Stephanie Kwolek.

The invention of Kevlar – a stroke of luck 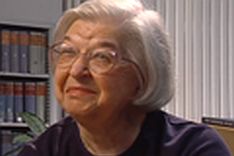 Stephanie Sophie Kwolek was born as the child of Polish immigrants in New Kensington, Pennsylvania, in 1923. At an early age, she became interested in science and medicine. She attended the women's college at today’s Carnegie Mellon University in nearby Pittsburgh and earned a bachelor's degree in chemistry in 1946. To finance her medical studies, she took up a research position at DuPont's textile fibre laboratory in Buffalo, New York. For fear of losing her job in the laboratory, the chemist showed great determination at work, just as many other women did after the Second World War. Soon after, she was employed at the DuPont Pioneering Research Laboratory in Wilmington, Delaware, which opened in 1950.

In the early 1960s, at the company's experimental station, she worked on a fibre for reinforcing radial tyres. The work consisted of manipulating strands of carbon-based molecules to produce larger molecules known as polymers. Sometime in 1964, Kwolek had difficulty converting a solid polymer into liquid form. She had expected to receive a clear, syrupy mixture, but the liquid was thin and opaque. Kwolek's colleagues said that the polymer she had produced was unlikely to be processed into a fibre. But Stephanie Kwolek insisted. She persuaded another scientist to "spin" the liquid in the laboratory spinneret, a machine used to remove liquid solvent and leave behind fibres. Thus, by a "happy coincidence", as she herself later put it, she discovered a fire resistant material, which proved to be five times stronger than steel by weight.

poster (in German) in our Poster Gallery is dedicated to the invention.

Kwolek was hardly ever involved in the development of practical applications of the new super fibre with the trade name Kevlar. She did not participate in the economic success of the invention either because she had transferred the patent rights to her employer DuPont. Today, Kevlar is contained in hundreds of household and industrial appliances – from oven gloves and glass fibres to tyres and hiking boots. But it is perhaps best known as the fibre used to make stab resistant and bulletproof vests.

Stephanie Kwolek was head of polymer research at the Pioneering Lab of DuPont until she retired from her position as a research associate in 1986. For her work, she was honoured with several awards, including the National Medal of Technology and Innovation and the Perkin Medal. In 1995, she was admitted to the