Otto Hahn and Lise Meitner in their lab

There have always been controversial decisions in the history of the Nobel Prizes. One of the Academy's biggest omissions is that it has repeatedly ignored Lise Meitner in awarding the prizes - despite 48 nominations!

Lise Meitner, who was born 140 years ago and died 50 years ago, was a brilliant scientist who had to fight discrimination throughout her life: as a woman in male-dominated natural science, as the child of Jewish parents in Nazi Germany, as a refugee in exile. The fact that Otto Hahn received the Nobel Prize in Chemistry alone in 1945 is closely related to this.

It was the greatest academic injustice that happened to Lise Meitner. And one of the most serious wrong decisions of the Nobel Prize jury - which it maintained for decades! For it was not Otto Hahn alone who had discovered nuclear fission in 1938. This epochal discovery was teamwork. It was Luise Meitner who stimulated Hahn's experiments and observations, accompanied them theoretically and finally interpreted them correctly. It provided the first scientific explanation of the decay of uranium atomic nuclei under neutron bombardment, which Hahn had not been able to explain at first.

From tolerated guest auditor to professor 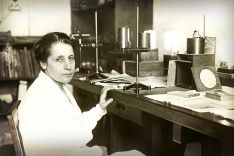 Meitner and Hahn had been a team for almost 30 years. Since she had come from Vienna to Berlin in 1907, both had worked together at the Kaiser Wilhelm Institute. Initially she was only allowed to attend Max Planck's lectures unofficially (female students were not admitted in Prussia until 1909) and to secretly enter her workrooms through the back door.

Two decades later, Meitner and Hahn were professors, each headed a department at the Kaiser Wilhelm Institute for Chemistry in Berlin-Dahlem: they were recognized greats in their field and a scientific team at eye level that could look back on many successes in research. In 1909, for example, the two had jointly discovered the radioactive recoil during the emission of alpha rays and in 1918 the element protactinium. In 1913 Meitner applied for a patent for the preparation of radiothorium (albeit in the USA;

"Radioactivity and atomic physics were in an incredibly fast state of development at the time; almost every month brought a wonderful, surprising new result in one of the laboratories working in these fields," Meitner recalled later.

Together with the chemist Fritz Straßmann, Hahn and Meitner formed a working group in 1934 which - inspired by Enrico Fermi's experiments and spurred on by Irene Curie's progress - researched on "transuranium" and fired neutrons at uranium nuclei.

Shortly before the breakthrough, Meitner had to flee 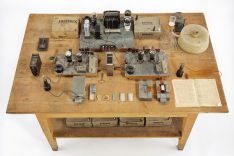 The "Nuclear Fission Table", today on display at Deutsches Museum in Munich

Lise Meitner had to flee during the most exciting phase of the experiments. Already after the National Socialist assumption of power in 1933 she had had to give up her professorship, but was able to continue working in the institute under the protection of her Austrian citizenship. With the "Anschluss" of Austria to Nazi Germany, the latter ceased to exist. A few weeks later, on 13 June 1938, Lise Meitner left Berlin almost without any preparations, only with two suitcases in her hands. In Sweden she found shelter as a refugee. A difficult new beginning with almost 60 years.

Hahn and Straßmann continued their research alone, but Hahn remained in close secret contact with Meitner. The table with the experimental set-up that led to the first nuclear fission can be seen today in the

Hahn and Straßmann made an observation during their experiments which they could not explain to themselves. "It is something with the 'radium isotopes', which is so strange that for the time being we only tell you," Hahn wrote to Lise Meitner on December 19, 1938. "There could still be a most strange coincidence. But more and more we come to the terrible conclusion: our Ra(dium) isotopes do not behave like Ra(dium), but like Ba(rium). I have arranged with Straßmann that for the time being we only want to tell this to you. Perhaps you can suggest some fantastic explanation. We know for ourselves that it can't actually burst in Ba." 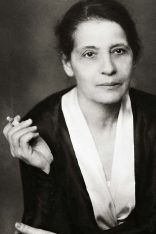 Meitner met shortly afterwards with her nephew Otto Robert Frisch, who worked at Niels Bohr's Institute in Copenhagen. On long walks they looked for a nuclear explanation for Hahn's experiment. According to Albert Einstein's famous formula for the conversion of mass into energy E = mc2, they calculated how much energy is released during nuclear fission, namely about 200 million electron volts. A few days later Meitner wrote to Hahn: "I am now pretty sure that you really have a destruction into ba(rium)".

In January 1939, Hahn and Straßmann's article about their observations appeared in the journal "Die Naturwissenschaften". Shortly afterwards Meitner and Frisch published their interpretation in the English "Nature". The two articles electrified researchers all over the world; they threw themselves into further research. Irene Curie's team in Paris quickly found out that a chain reaction would be conceivable due to the additional neutrons released. In 1943, Meitner was invited by the USA to participate in the "Manhattan" project in Los Alamos to develop the atomic bomb, but the convinced pacifist cancelled. Two years later, the first atomic bomb was dropped.

Nominated by all the greats of physics

After the Second World War, Otto Hahn was awarded the Nobel Prize alone, while Meitner, Straßmann and Frisch were left out. After all, Otto Hahn proposed Meitner (and Frisch) for the prize in 1948.

Lise Meitner was, believe it or not,

nominated 48 times for the Nobel Prize (in physics and chemistry). Almost everyone that has rank and name nominated her: Max Planck (who nominated her no less than seven times!), James Franck, Niels Bohr, Max Born and many others. 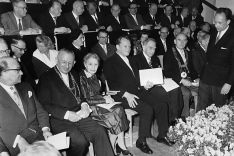 Lise Meitner, Otto Hahn and Lord Mayor Willy Brandt at the opening ceremony of the Hahn-Meitner-Institut 1958 in Berlin

When it was announced in October 2018 that

Donna Strickland was the first woman since 1963 (Maria Goeppert-Mayer) to receive the Nobel Prize in Physics, it was often recalled that the committee had ignored female researchers several times in the past and honoured men in their place who had benefited from their research.

Along Meitner, Rosalind Franklin is a prominent and tragic example of a woman who has been passed over: James Watson and Francis Crick used their research results on DNA behind their backs for their own publications and received the Nobel Prize together with Franklin's colleague Maurice Wilkins in 1962. Franklin's decisive preliminary work was not appreciated with a single word. Whether she would have accepted it as stoically as Meitner is questionable; Franklin had already died in 1958.

Although Lise Meitner was never really happy in Sweden, she remained there until a few years before her death, when she moved to Cambridge. There she died on 27 October 1968, shortly after Hahn.

It was only in the past two decades that Lise Meitner finally received the recognition she deserved in the public eye: Streets and schools were named after her, as were prizes, elements and asteroids.