One of the oldest German companies is "Johann Maria Farina gegenüber dem Jülichs-Platz GmbH" in Cologne. Existing for more than three centuries, it is assumed to be the world's oldest perfume factory still in existence. And for almost as long the company has been fighting against counterfeiters, imitators and product pirates.

Johann Maria Farina (1685-1766) developed a fragrance water, an "Aqua mirabilis" or "miracle water", as they called it (at the time, perfumes were also said to have a medicinal effect, which manufacturers seldom denied). The fresh fragrance of Johann Maria Farina differed greatly from the heavy, extremely expensive perfumes that were common among the nobility of the time. It was not based on musk essences but on notes of bergamot, lemon and orange. "My fragrance is like an Italian spring morning after the rain," Johann Maria is said to have described his creation.

From Cologne to the world 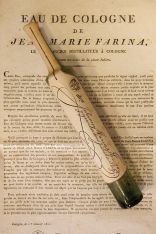 He later named his perfume "Eau de Cologne" in honour of his adopted city of Cologne. The product was to slowly launch a world career and finally give its name to an entire fragrance class. Farina succeeded in maintaining the quality of his products at a consistently high level through a sovereign purchasing policy for raw materials, a well-structured manufacturing operation and not least thanks to his skills as a perfumer, i.e. thanks to his unique nose. He was practically the inventor of the brand perfume. To this day, Farina has produced Eau de Cologne according to his original recipe.

Initially, however, the sale of fragrance water remained a secondary business; it was not until the years passed that "Eau de Cologne" became the focus of Farina's activities. After the death of his brother, Johann Maria continued the business from 1733 under his name and at the new location - Obenmarspforten 23, “gegenüber” (opposite) Jülichs-Platz. The short form of this address - „Farina gegenüber“ - became a trademark.

The fragrance of princes and celebrities

The popularity of the Kölnisch Wasser grew rapidly, first in France and then throughout Europe. Eau de Cologne dominated the perfumery market at least until the end of the 19th century. The family business Farina became the most famous perfume manufacturer in the world at the time and a court supplier to many royal courts. Many famous personalities from Mozart, Schiller and Napoleon to Heine, Beethoven and Oscar Wilde to Thomas Mann and Bill Clinton were Farina's customers over the years. In the company archives - existing since 1709! - you can find orders from Queen Victoria (600 bottles!), Goethe ("6 glasses") or Kaiser Wilhelm I ("the usual shipment").

An imitation becomes more famous than the original 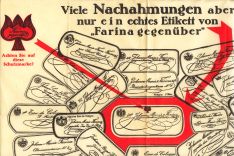 No wonder, then, that this success aroused desire and called imitators to the scene. Before the days of functioning industrial property rights, product pirates were able to get down to business unhindered. A number of competing products appeared on the market under very similar manufacturer names. One of them finally became better known than the original: When it comes to "Eau de Cologne", most people today think of "4711", an imitator who is also very rich in tradition by now.

Wilhelm Mülhens had been selling Eau de Cologne in Cologne's Glockengasse since 1799. He named his company "Franz Maria Farina, Glockengasse 4711, Cologne" in order to profit from Farina's reputation. This was the beginning of long disputes with "Farina gegenüber". Again and again Mühlens took persons named Farina (a common name in Italy), who had nothing to do with the "gegenüber" family, as employees or partners on board to give the plagiaristic company name an appearance of justification. 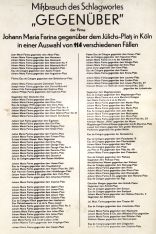 "Farina gegenüber" therefore announced in the "Frankfurter Nachrichtenblättern" of 20.9.1805: "In order to prevent any confusion in the names between Johann Maria Farina gegenüber Jülichsplatz and Franz Maria Farina, which the latter does not seem to avoid in the heel of his Cöllnisch Wasser by means of his usage slips and announcements; does the undersigned feel compelled to declare that the intended Franz Maria Farina in fact is Mr. Wilhelm Mühlens in Cölln", who had "bought" the name of a certain Carl Franz Farina from Bonn.

It was not until 1873 that Mühlens was finally forbidden to use "Farina" in the company name. Since then the company has been called "Eau de Cologne- und Parfümerie-Fabrik Glockengasse No. 4711 gegenüber der Pferdepost" (1682909). Today it belongs to the company Mäurer & Wirtz. Original and imitation are both among the oldest perfume brands in the world; 4711 rather in the low-price range, Farina as before as a luxury article.

Against this background, it is not surprising that the Farina family was one of the pioneers in the development of industrial property rights in Germany. Jean Marie Farina (1809-1880) fought for decades for legal trademark protection. In 1836 he made his first corresponding submission to the responsible Prussian ministerial bureaucracy. In November 1874, the first Trademark Protection Act was finally passed in the German Reichstag and came into force on May 1, 1875. Johann Maria Farina gegenüber dem Jülichs-Platz was the first Cologne company to register its labels as trademarks (currently 002425452 ).

The Kölnisch Wasser and the brands 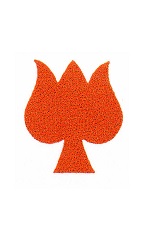 "Farina gegenüber" fought again and again against alleged imitators until very recently. In the DPMAregister database you will find some examples of (deleted) trade marks which look very similar to the historical Farina logo or indicate similar addresses (e.g. 25348, 26016, 35568, 36770, 433499, 462625).

"Eau de Cologne" is today the generic term for a light perfume with about 3 to 5 per cent perfume content and cannot be protected as a trademark in the corresponding class of goods (for beverages, on the other hand, it can; see 302012002803).

„Original Eau de Cologne“ and „Echt Kölnisch Wasser“) are collective trademarks of the "Verband der Kölnisch Wasser-Hersteller e.V." registered at the DPMA. However, registration as a Community trade mark was rejected in 2014 by the EUIPO and ultimately by the European Court as a "

Farina did not secure the word mark „FARINA 1709 Original Eau de Cologne“ until 2012. the Company has also registered a red or black tulip sign as trademark.

The company (here the current registered company sign) is still owned by the family. Today, thanks to DPMA & Co., it is somewhat easier for them to defend their intellectual property than three centuries ago.