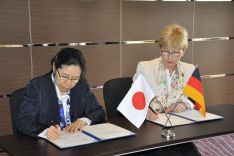 Geneva/Munich. At this year's General Assembly of the World Intellectual Property Organization (WIPO), DPMA President Cornelia Rudloff-Schäffer met Naoko Munakata, the new Head of the Japan Patent Office (JPO), for the first time. "I am very pleased that for the first time in the history of the JPO a woman has been appointed for this important Position", said Ms Rudloff-Schäffer. "I'm sure that our offices will continue the good cooperation as they have already done in the past."

At their first meeting, the two Heads of the offices signed a new data exchange agreement. The new agreement continues the existing cooperation and expands the possibilities for the reciprocal use of patent data. The basic aim of the agreement is to speed up data transfer between the two offices. In the future, they want to benefit even more from the findings of the respective partner office. "The cooperation between the JPO and the DPMA is based on a long-standing, intensive relationship and the data exchange agreement is one of many strong pillars", emphasised Ms Rudloff-Schäffer. 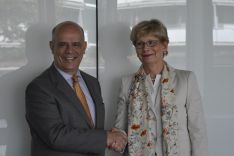 The 57th Series of Meetings of the Assemblies of the member states of WIPO takes place in Geneva from 2 to 11 October 2017. In the margins of the meeting, President Cornelia Rudloff-Schäffer also met with Dr Luiz Otávio Pimentel, President of the National Institute of Industrial Property of Brazil. In addition, a meeting with Johanne Bélisle, Head of the Canadian Intellectual Property Office, is planned for 5 October. Among other things, the topic "Industry 4.0" and the current state of development of the European patent system were discussed at these meetings. The German Patent and Trade Mark Office plays an important role as the largest national patent office in Europe. This was confirmed once again by the talks in Geneva.

Inventiveness and creativity need effective protection. The DPMA is the German centre of expertise for all intellectual property rights - for patents, utility models, trade marks and registered designs. As the largest national patent office in Europe and the fifth largest national patent office in the world, it is committed to Germany’s future as a country of inventors in a globalised economy. Its roughly 2,600 staff based at three locations – Munich, Jena and Berlin – are service providers for inventors and companies. They implement the innovation strategies of the Federal administration and develop national, European and international IP systems further.