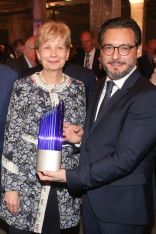 The winner of the Deutscher Zukunftspreis, Sami Haddadin, with the President of the German Patent and Trade Mark Office, Cornelia Rudloff-Schäffer

Berlin/Munich. It is a distinction from the highest level of government: The President of the German Patent and Trade Mark Office (DPMA), Cornelia Rudloff-Schäffer, responded with delight to the presentation of the Deutscher Zukunftspreis award to Professor Sami Haddadin and his team of robotics researchers. "I offer my warmest congratulations to Sami Haddadin and his two team colleagues", said the DPMA President. "The jury thus honours three exceptional young scientists in one of the most important future technologies." Cornelia Rudloff-Schäffer, who is also a member of the Board of Trustees of the Deutscher Zukunftspreis award, also emphasised the importance of the award-winning innovation for society: "The award winners do not only raise robotics to a new level. They also show ways in which artificial intelligence and self-learning systems can contribute to improving the well-being of people."

With their Franka Emika GmbH, Professor Sami Haddadin (Dr.-Ing.) and his two team colleagues, Simon Haddadin (Dr. med.) and Sven Parusel, developed the Robot arm Franka, a sensitive assistant that works with humans. Franka can drill, fasten a screw and sort objects – and one day, according to the developers’ expectations, it could even be able to care for the elderly. A central aspect of the new development: Franka is adaptive and easy to operate. There is no need for time-consuming programming, but it can be fed with apps. Even non-experts are thus able to continuously expand the skills of their robots. Sami Haddadin, Professor at Leibniz Universität Hannover, calls it the "democratisation of digital Automation". 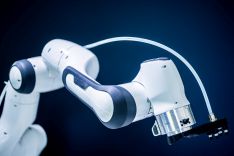 em>On Wednesday evening, Federal President Frank-Walter Steinmeier awarded the Deutscher Zukunftspreis, the Federal President’s Award for Technology and Innovation 2017, to the three scientists. The team had been nominated for the prize by the German Patent and Trade Mark Office among others. The prize rewards highly technologically innovative research projects that reach the commercialisation stage and create jobs, and is endowed with 250,000 euros in prize money. At the award ceremony at the Kraftwerk Berlin, which was also broadcast on the ZDF television channel, the three nominated teams presented their projects once again.

In addition to Professor Haddadin, Dr Klaus Dieter Engel and Stefan Schulz (Dr.-Ing.) and their teams were nominated. With syngo.via Cinematic Rendering, Engel at Siemens Healthineers – Siemens Healthcare GmbH in Erlangen has made essential progress on 3D clinical visualisation. Stefan Schulz develops highly innovative bionic hand and finger prostheses in his company, Vincent Systems in Karlsruhe. All three nominees hold patents with the DPMA. "The nominees once again demonstrated what the Germany as a location for innovation has to offer", commented Cornelia Rudloff-Schäffer. "We at the DPMA will continue to do everything in our power to make sure that such cutting-edge developments receive the best possible protection in the market."

Inventiveness and creativity need effective protection. The DPMA is the German centre of expertise for all intellectual property rights - for patents, utility models, trade marks and registered designs. As the largest national patent office in Europe and the fifth largest national patent office in the world, it is committed to Germany’s future as a country of inventors in a globalised economy. Its roughly 2,600 staff based at three locations – Munich, Jena and Berlin – are service providers for inventors and companies. They implement the innovation strategies of the Federal administration and develop national, European and international IP systems further.