Konrad Adenauer at the party conference of the CDU in 1965

Konrad Adenauer is known as the first chancellor of the Federal Republic, as "the old man from Röhndorf" who tied the young FRG to the West, achieved reconciliation with France, made the post-war economy flourish, drove European unification and brought the last prisoners of war home from Russia. Less well known is that Adenauer, who died 55 years ago, is also credited with other things: confidential CDU papers show that he had the SPD leadership spied on for several years. And patent documents prove that he was also an inventor throughout his life.

Adenauer, born in 1876, was trained as a lawyer and from 1906 politically active in his hometown of Cologne as an alderman to the mayor. During the First World War, he was responsible for the food supply - a difficult task, as food became increasingly scarce the longer the fighting lasted. However, Adenauer did not just want to manage the shortage, but actively do something about it himself.

Emergency bread made from cornmeal 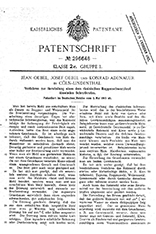 Together with two colleagues, the scion of a Cologne baker's family developed a kind of hardship bread. Since grain was a scarce commodity and even substitutes such as potato flour had become rare, he developed a bread based on corn. On May 2, 1915, Adenauer and Jean and Josef Oebel were granted a patent (

AT74310) for the "process for the production of a bread similar to Rhenish rye bread".

The secret of this bread: first husk the corn and dry it. "It has now been shown that a substantially different result is obtained if one does not roast the corn kernel and prepare flour from it, but if one first makes flour from dehusked corn, subjects this flour to dehydration and now uses it to prepare bread. The added basic sour then develops a pleasant tasting, well rising dough."

Inventor of the veggie sausage

This "Adenauer bread" is said to be available in modified form to this day (or again) in certain Cologne bakeries. But the corn bread was not Adenauer's only invention to combat wartime food shortages. Since meat was also in short supply, he turned to a healthy substitute: soybeans. In a sense, Adenauer became the inventor of the veggie sausage:
"The purpose is to give the much cheaper plant protein a greater entrance in consumption than before, not alongside but in place of animal protein. The purpose is to be achieved by giving the consumer the plant protein under the mask of meat food, so to speak, because the people know and love meat food. This can be achieved by a popular form of meat food, the sausage".

Adenauer wrote this to his patent attorney in 1915, who remained skeptical - as did the Imperial Patent Office. Even when Adenauer changed patent attorneys and filed his application through a straw man, the Patent Office did not consider his "process for improving the taste of protein-rich and fat-containing vegetable flours and for the production of sausage" to be a patentable invention (there were probably mainly food law concerns).

Patents in Britain and Austria, but not in Germany 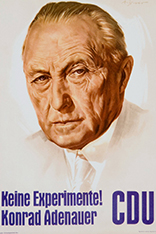 "No experiments": As an inventor, Adenauer did not stick to the slogan. CDU election campaign poster 1957

But Adenauer was not discouraged and registered his soy sausage abroad. The "process for preserving sausage and the like," which his straw man August Schlüter applied for, received a patent in Austria(

AT81019). In it, Adenauer describes a special effect of the soybean:
"In the first place, the soybean comes into consideration for the preservation of meat. Although soybeans in a moistened state, e.g. in the form of a paste mixed with water, sour rather quickly even when cooked, if they are combined with meat, they prevent its decomposition as far as this combination goes and do not spoil themselves. On what this peculiar phenomenon is based is not entirely clear."

He used this "phenomenon" to preserve and "enhance" his soy sausage (which was therefore not really vegetarian): "It is the admixture of a purely vegetable substance, which is not only harmless, but even high in protein, the addition of which therefore still increases the nutritional value of the preserved food. Also, the taste of the latter is no longer unfavorably affected, as with other preserving agents."

Adenauer also applied for a patent for this process in Great Britain in June 1918, i.e., while the war was still on - which is a curious note, since the naval blockade of Germany's wartime adversary was partly responsible for the food shortage that Adenauer wanted to alleviate with his invention. He received his British patent (under his own name this time), "lmprovements in the Composition and Manufacture of Sausage, Meat and the like" (

GB131402), in August 1919. He also applied for and received a patent for his invention in France, another enemy, during the war ( 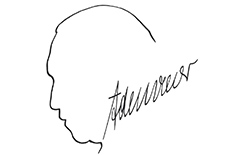 In the years that followed, Adenauer's inventive activities were dormant, as he had become Lord Mayor of Cologne in September 1917 and subsequently rose to become a prominent politician of the Weimar Republic. But when the National Socialists deposed him as Lord Mayor after their seizure of power in 1933, imprisoned him for a time and "coldcocked" him politically, his inventive spirit reawakened simply for lack of employment.

All areas of the house and garden became inspiration for his optimization tinkering: He wanted to make it easier for his wife to patch holes with an illuminated "darning egg". He called his battery-powered darning egg a "device for mending fabrics" and described the advantages to officials at the Reichspatenamt (as the predecessor to the DPMA was now called):
"In less bright daylight and in artificial light, the defective areas (...) are difficult or impossible to see", his „Stopfei“ therefore brought "a considerable improvement over the supports now in use and an easing of the work while saving light, in that it illuminates the supports to be made of a translucent material from the inside, i.e. from the side opposite the fabric pulled over, by means of a small electric bulb".

But again, he did not receive a German patent, as there were already several similar applications made in the USA. At the end of the 1930s, AEG launched an illuminated mushroom-shaped darning aid.
At home, Adenauer still improved, among other things, the bread toaster by means of a viewing pane and tinkered a timer for his bedside lamp. 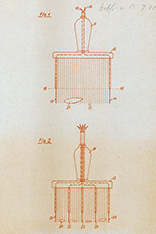 But he was particularly active in the garden: He invested a lot of time and effort in an "electric brush for pest control". He had AEG install some electrodes in a wallpaper brush, which was also to be dipped in a poisonous solution. He wanted to use it to coat tree trunks and shrubs that were infested with vermin. Thanks to a voltage of 1000 volts, the device would certainly have killed the pests - but unfortunately probably also the gardener. Under certain circumstances "absolutely deadly", warned AEG. Once again, the Reich Patent Office refused to protect Adenauer's invention.

Absolutely harmless, but apparently not worthy of a patent either, was Adenauer's invention of a hinged attachment for a watering can. He spoke of a "stationary shower head that allows watering with an undivided jet and with spray and can be easily cleaned." He also corresponded extensively, but unsuccessfully, with the Reichspatentamt about this. 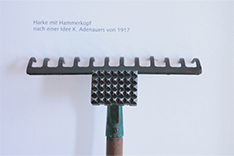 He also improved a garden rake by having the head of a meat tenderizer welded onto the back. This was intended to break up larger clods of soil in flower beds. And he tinkered with an improved mouthpiece for the garden hose. These inventions can be admired today in the

Adenauer had also thought very early on in his long inventor's career about how to reduce the amount of dust generated when driving an automobile. He was a car fan all his life and worked on improved suspension, a "dimming window for car drivers" and "anti-dazzle glasses for pedestrians".

Environmental protection was obviously close to his heart, as he worked on a "process to prevent air pollution from exhaust gases, soot, etc. from fireplaces". Safety was also important to him, as he invented a "device to prevent being run over by streetcar cars." This is said to have involved a rotating roller that would have swept inattentive pedestrians out of the way, as it were.

"Inventor" of the autobahn? 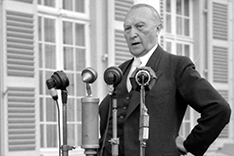 Unfortunately, another "invention" is never associated with Adenauer, but unjustly with a completely different figure: the legend persists that the German autobahns were the brainchild of Adolf Hitler. Yet the conception of these highways was an achievement of the Weimar Republic. And it was Konrad Adenauer who, as mayor of Cologne, opened the first autobahn, today's A 555, on August 6, 1932. He praised and promoted the concept as the roads of the future.

After the collapse of the Nazi regime, Adenauer had no more time for new inventions. He returned to politics - although already of retirement age. In 1945, he temporarily became mayor of Cologne again, later president of the Parliamentary Council and finally the first chancellor of the new West German republic.

"Reconciliation" with the Patent Office

As chancellor, Adenauer warmly congratulated the Patent Office, with which he had had so much to do over the decades, on its reopening on October 1, 1949, apparently not taking it personally that it had granted him only one patent (on corn bread) for his total of some 40 inventions. Adenauer wrote that it filled him "with particular satisfaction" that the Patent Office was the first upper federal authority in the FRG to resume its work. It would be "of even greater importance than before."

When Adenauer finally retired in 1963 at the age of 87 after 14 years as Chancellor, his passion for invention does not seem to have flared up again. At least no more ideas are known from that time. But he had enough to do with critically commenting on the policies of his successor (Ludwig Erhardt). Konrad Adenauer, statesman and inventor, died on April 19, 1967.