Searching for the divine harmony of the universe

Christians all over the world celebrate the birth of Jesus of Nazareth at Christmas. Exactly when this took place has been the subject of debate among researchers for centuries. However, Johannes Kepler's date of birth is undisputed: 27 December 1571. The great astronomer was one of the first to try to determine the year of Christ's birth using scientific methods. According to Kepler, Jesus must have been born before the year 4 BC. Later researchers have confirmed this: Today it is assumed that Jesus was born between 7 and 4 BC.

The evangelist Matthew reports that King Herod had all the male infants in Bethlehem killed in order to eliminate the "King of the Jews" who, according to a prophecy, had recently been born. Kepler found in the Roman-Jewish historian Flavius Josephus the information that a lunar eclipse took place when Herod was dying. Kepler believed he could date this eclipse and concluded that Herod must have died between 13 March and 11 April 4 BC and that Jesus must have been born before then.

Johannes Kepler's deduction of the dating of Jesus' birth is disputed today, but his enormous scientific life achievement is not. He is considered the (co-)founder of modern astronomy and natural sciences, on a par with Galileo and Newton. 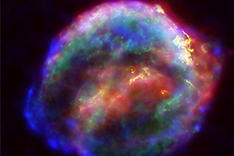 Composite image of the remains of "Kepler's supernova", which he observed on 9.10.1604 - the last one seen in our Milky Way galaxygesehen wu

Kepler, who was born 450 years ago in Weil der Stadt, contracted smallpox as a child (now eradicated - thanks to vaccination!). He barely survived, but with disfiguring scars on his hands and damaged eyes. His mother, who ran the "Sonne" inn in Ellmendingen, showed him a comet in 1577 and a lunar eclipse in 1580 - his enthusiasm for astronomy was aroused. Scholarships enabled the mathematically gifted boy to attend higher schools (such as Maulbronn Monastery) and to study theology at the University of Tübingen. There, Kepler became a convinced follower of the new heliocentric world view after Copernicus, which, however, was rejected by both the Reformed and the Catholics at the time.

Kepler lived in a time of upheaval, marked by the Thirty Years' War, the Reformation and the Counter-Reformation. Questioning canonised knowledge could quickly become existential and life-threatening. Throughout his life, Kepler fought for what he knew to be the truth, regardless of professional disadvantages.

With horoscopes to fame 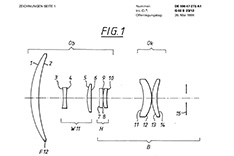 In 1594 he accepted a position in Graz as a "landscape mathematician". One of his tasks was the compilation of astrological calendars. The horoscopes, to which he had an ambivalent attitude throughout his life, made him famous. In 1596, his first work on astronomy, "Mysterium cosmographicum", was published.

Kepler was a deeply devout Protestant and therefore had to leave Graz when the Counter-Reformation demanded his conversion. He went to Prague to the court of Emperor Rudolf II and became assistant to the famous court astronomer Tycho Brahe. The latter had collected the most accurate astronomical data and had the most precise measuring instruments of his time. But the collaboration was fraught with conflict.

The data treasure of Tycho Brahe

When Brahe died unexpectedly in 1601, Kepler became his successor and was allowed to work with his instruments and data - a heavenly gift for the aspiring scientist. Brahe's heirs fought bitterly with him for years over the treasure trove of data (there were even rumours that Kepler had something to do with Brahe's death). Brahe's observations were evaluated by Kepler in his "Astronomia nova", which appeared in 1609 - one of the greatest works of natural science. It contains findings that are still valid today: Kepler's first two laws of planetary motion. 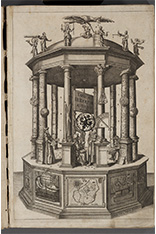 Frontispiece of the "Tabulae Rudolphinae", engraved by Georg Koeler

When Kepler learned that Galileo Galilei had observed the surface of the moon and the moons of Jupiter with the aid of a telescope, he became intensively involved with optics. He developed an astronomical telescope that was later named after him. To this day, patent applications refer to it, e.g. "Modular infrared Kepler telescope" (

Kepler published fundamental works on optics (including "Dioptrice"). He thus supported Galileo's work, who wrote to him in response: "I thank you - because you are the only one who believes me."

Kepler prophesied to Galileo: "Create ships and sails suitable for the celestial air. Then there will be people who will not frightened of exploring the barren expanse of space." During this time, Kepler wrote the story "Somnium" (Dream), which describes a journey to the moon and may be considered one of the first science fiction texts.

In search of cosmic harmony 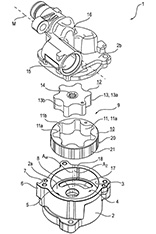 Kepler was at the peak of his scientific career when, after his wife and son, Emperor Rudolph also died in 1612. The new Emperor Matthias confirmed Kepler's position as an imperial mathematician, but suggested that he move to Linz, where he was to work again as a landscape mathematician and complete the "Rudolphine Tables" with data on the planetary orbits, which he had begun back then with Brahe.

In Linz, Kepler worked on a "harmonic" model of the universe and taught himself the theoretical foundations of music as preparation. In 1619 he published his five-volume "World Harmonics" ("Harmonices mundi") with his third law of planetary motion.

He also worked on the mathematical problem of calculating the volume of wine barrels (Kepler's Barrel Rule). Along the way, Kepler also made inventions, including one that - if there had already been something like patents at the time - would certainly have earned him a licence or two: a valveless gear pump. A mine owner needed a device to pump water out of his mine. Kepler invented a largely maintenance-free pump for him, the principle of which is still used today in oil pumps in car engines, for example, see 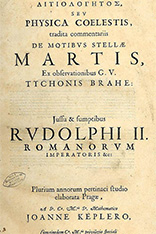 In order to understand the intellectual climate in which Kepler had to work, it is worth recounting that his mother, who knew much about medicinal herbs and plants, was accused of witchcraft in 1615. She was shown the instruments of torture to get her to confess. For six long years Kepler fought for her and personally defended her from the Inquisition. Finally, Katharina Kepler was released, but did not live for long after that as a result of the terrible prison conditions.

In Linz, Kepler, who had made an enemy not only of the Counter-Reformation but also of many Protestants with his "new-fangled" views of the universe, came under increasing pressure. With his second wife and children, he went to Ulm, where the "Rudolphine Tables" finally appeared in 1627.

Financially his financial situation became increasingly difficult. Even his grandchildren tried in vain to collect outstanding fees from the imperial court. In this situation, Albrecht von Wallenstein became his patron. Kepler had already drawn up horoscopes for the commander. Now Wallenstein brought him to Sagan in Silesia and offered him a professorship in Rostock. But on 15 November 1630 Kepler died while travelling in Regensburg.

Throughout his life he strove to reconcile faith and science: "I believe that the causes of most things in the world can be derived from God's love for man." Now that fits perfectly into the Christmas season!