First patent for an electric motor

In times when it was not yet possible to share news with the whole world with just a few clicks, many researchers often worked on the same problem without knowing about each other. It was not unusual for them to come up with similar solutions almost simultaneously. When intellectual property protection was still in its infancy, even groundbreaking inventions were often not filed for patent - and thus often remained unnoticed and practically worthless.

Thomas Davenport, however, was not only one of the pioneers of electrical engineering, but also one of the first inventors to appreciate securitised intellectual property - and owes a piece of immortality to it. His patent, which he received in the USA on 25 February 1837, bears the number

US132A and was the world's first patent on an electric motor.

First patent, but not the first

In the United States, it had in principle been possible to apply for patents to the "Superintendent of Patents", who was subordinate to the Secretary of State, since 1790. However, the patent office, which is now called the USPTO, was not established as an authority until 1836, and only then were patent applications numbered consecutively. Davenport was therefore one of the first applicants to the newly founded US Patent Office.

Today we know: Davenport received the first patent, but he was by no means the first to build an electric motor. Several scientists around the world were successful before him or in parallel in discovering electricity as a source of propulsion. But only very few of them had tried to obtain IP rights.

The blacksmith as electric pioneer 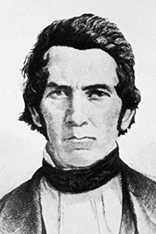 The time was ripe for the electric motor: after Allessandro Volta had invented the battery in 1800, Hans Christian Oersted had generated a magnetic field from electric current in 1820, Michael Faraday had discovered electromagnetic rotation in 1821 and William Sturgeon had built an electromagnet in 1825, the electric motor was the logical next step.

Davenport, born in 1802 in Williamstown (Vermont), was a trained blacksmith. In 1833, he obtained an electromagnet from Joseph Henry, another US technology pioneer who, along with Faraday, is considered the discoverer of electromagnetic induction, and began his own experiments. Already in the following year, he is said to have built and publicly demonstrated his first direct current electric motor. It is said that he actually wanted to have applied for a patent for it as early as 1835 - why nothing came of it is unclear.

Model in the museum

"Improvement in propelling machinery by magnetism and electro-magnetism" is the name of the patent Davenport received in 1837. He had submitted a model with the application. Since it was destroyed in a fire at the patent office, he built a second, possibly improved model, which can be seen today in the

National Museum of American History at the Smithsonian Institution in Washington: a wooden base carries a ring-shaped permanent magnet in which four red-painted, crescent-shaped electromagnets rotate, which are switched by a commutator. The "machinery" is said to have managed about 1000 revolutions per minute and an output of about 4.5 watts.

Davenport recognised the potential of his invention: Soon, he is said to have prophesied, motors would be produced that could drive the largest machines based only on two galvanic magnets. But he was not destined to permanently drive technical progress. Davenport's patent probably remained largely inconsequential in practice.

High voltage all around 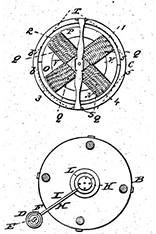 Research in the 19th century was charged: electricity and its possible applications "electrified" science, so to speak. In 1820, André-Marie Ampère discovered that a magnetic field generated by a current flow could be amplified by a wire coil. Two years later, Peter Barlow is said to have assembled the first functioning electric motor, Barlow's wheel, which was, however, still too weak for any practical use.

Ányos Jedlik, a Hungarian priest, is said to have built a DC motor in 1829 (and later also to have been the first to discover the electrodynamic principle). In 1835, two Dutchmen, Sibrandus Stratingh and Christopher Becker, built an electric motor that could power a small model vehicle. Davenport is also said to have set a kind of toy train in motion with his motor.

The old problem: (too) expensive batteries! 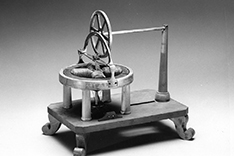 Davenport's model, today in the National Museum of Amercian History

Jacobi's boat motor was powered by expensive zinc-platinum batteries. The high manufacturing costs of batteries were (and are?) the biggest problem of powerful electric motors. Steam engines were much cheaper and more profitable at the time. Later, the internal combustion engine prevailed.

Against this background, it becomes more understandable why Davenport's patent remained largely inconsequential. At a time when new inventions and improvements followed one after the other, Davenport was unable to assert himself on the market. He settled in New York, but did not find enough financial support; a planned company foundation failed. At least he was able to publish a short-lived journal on electromagnetism. The printing press for it is said to have been driven by an electric motor he developed himself. Davenport died in Vermont in 1851.

However, all these more or less simultaneous developments of the first DC motors form a "dead branch" in the family tree of electric motors: modern DC drives are based more on the dynamo-electric principle, whose pioneers include Jedlik, William Ritchie, Charles Wheatstone and above all Werner von Siemens.
The latter was a strong advocate for the protection of intellectual property and was instrumental in finally establishing a patent office in Germany in 1877.