Joy, beautiful spark of divinity: 250 years ago, one of the greatest composers of all time was born, Ludwig van Beethoven. He was baptized in Bonn on December 17, 1770; the exact date of birth is unknown (probably two or three days before). The loss of his hearing was overshadowing Beethoven's life - a suffering that can be well alleviated today thanks to some inventions.

The fact that Beethoven's great jubilee was somewhat lost in this pandemic year and that many events in his honor were cancelled or had to be postponed - this somehow fits in with his life, which was also always marked by illness. Beethoven's most striking health problem was his gradual loss of hearing. He had to give up his career as a concert pianist because of this, but as a composer he defied his deafness to write grandiose works, although he could only hear them in his mind.

Beethoven was in his late twenties when his hearing problems began. At that time he lived as a celebrated piano virtuoso in Vienna, the world capital of music. He had already traveled to the Danube for the first time in 1786 to take lessons with Mozart. It is unclear, however, whether the two met at all. Some of Mozart's patrons later became Beethoven's financers and enabled him to lead a financially independent life. At his concerts he captivated the audience with his piano compositions and free improvisations. 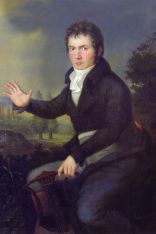 Portrait of Beethoven 1804 by Joseph Willibrord Maehler (Wien Museum)
But then his hearing began to fail him. Beethoven was devastated. Not only did his hearing loss make it practically impossible for him to pursue his profession as a piano virtuoso, it also destroyed - so he felt - his social life.

To hide his communication difficulties, he withdrew socially. This gradually earned him the reputation of being a solitary grumbler: "O, you people who think me hostile, stubborn or misantropic, how wrong you do me, you do not know the secret cause," he wrote in 1802 in his "Heiligenstadt Testament. "Therefore, forgive me if you see me receding where I like to mingle among you, twice over my misfortune does me harm, in that I am misunderstood in this... I must live like an exile.“ In this crisis he thought of suicide. The famous first four notes of the 5th symphony are meant to symbolize the grim knocking of fate at his door. 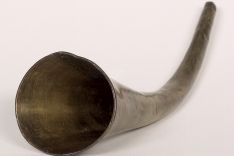 Today, thanks to modern technology, Beethoven would have good prospects of leading a normal social life despite his illness and perhaps continuing to give concerts. But at that time, there were only primitive hearing aids: For example, Beethoven attached a wooden stick to his grand piano, which he took between his teeth when playing, in order to perceive the sound vibrations.

And he had the mechanic Johann Nepomuk Mälzel construct various ear trumpets. These could be attached to the head, for example. Ear trumpets, some of which have been known since antiquity, have only a limited efficiency: a hand behind the ear amplifies the sound by about 10 decibels, ear trumpets by 25 decibels. In later years, Beethoven had to switch to writing his conversations down and used „conversation booklets“ for this purpose.

Mälzer was a talented inventor who, among other things, developed the metronome, which Beethoven was the first composer to use. The legendary "Schachtürke" (a chess playing automat, probably fake) made him famous. Mälzer also developed the "Panharmonicon", a mechanical music automaton. In 1813, Beethoven wrote "Wellington's Victory" (Op. 91) for the Panharmonicon, which, in its version for orchestra, was to become his greatest success with the public until then.

Telephone and microphone: Inventive blessing for the deaf

"Acousticon" by Miller Reese Hutchison, advertisement from 1906
At that time, it was to take several decades before truly effective hearing aids came onto the market. The development of the telephone set things in motion: Sounds became transmittable and amplifiable. New perspectives were opened up for hearing impaired people.

In 1895, Englishman Bertram Thornton applied for a patent for "Improvements in apparatus for enabling the deaf to hear"(

GB18780) . This was a telephone-like desktop hearing aid with a microphone. Miller Reese Hutchinson constructed his "Acouphon" in 1895, also a tabletop device that caused a sensation. But these first devices were still a long way from the discreetly transportable, effective hearing aid (e.g. 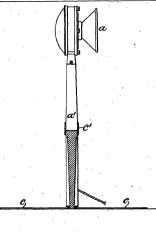 In 1902 Hutchinson presented his portable, battery-powered "Acousticon", which was hailed as a miracle by the American press. Amplifier and batteries were hung around the neck, the microphone held by hand.

As early as 1878 Werner von Siemens had designed a telephone receiver with particularly intensive amplification for the deaf. In 1913 hearing aids from Siemens came onto the market under the name Phonophor, which also amplified ambient sound. They consisted of battery, microphone and receiver, were still quite large, but could be disguised as a handbag or suitcase.

For the next decades hearing aids remained quite extensive and eye-catching (see e.g.

DE721670A). Only with the invention of the transistor in 1947 was it possible to reduce hearing aids to an inconspicuous form. The Sonotone 1010, which was launched on December 29, 1952, was the first commercial product with transistor technology ever. This marked the beginning of the development of small, inconspicuous devices such as those available today. Modern hearing aids (e.g.

Result of a flea bite?

The cause and nature of Beethoven's hearing loss is still the subject of speculation today. It may have been the result of a flea bite on a concert tour to Berlin, during which the musician was infected with flea spot fever, which then may have affected his hearing.

In 1801, Beethoven described his symptoms as follows: "The envious demon has played a terrible trick on my health, namely, my hearing has been getting weaker and weaker for the past three years... only my ears, they buzz and rush away day and night... I spend my life miserably. For two years I have avoided all societies because I am not able to tell people that I am deaf. If I had any other profession, I would have done so, but in my profession it is a terrible state.“ No wonder that the musician was considered grumpy, ill-tempered and difficult in dealing with others. 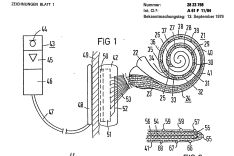 Beethoven tried everything: teas and drops, wool earplugs with horseradish, early electricity therapies, dozens of different doctors. But his deafness continued inexorably. At some point, even a modern hearing aid probably wouldn't have helped anymore, because they only work when the hearing is not yet completely lost. Today, however, an implant would be an option for Beethoven.

The cochlear implant was a quantum leap. The Austrian engineer Erwin Hochmair and his wife Ingeborg Hochmair-Desoyer developed the first electronic multi-channel implant that is installed in the cochlea. In 1978 Siemens applied for a patent for their invention(

It consists of an external processor, which converts acoustic signals into electrical impulses, and the actual implant, which sends these impulses to the brain. A tiny microphone behind the ear registers acoustic impressions from the environment. To date, the cochlear implant is the only device that has ever successfully replaced a human sensory organ.

For the most severe cases, there is still the brainstem implant, which bypasses the damaged auditory nerve and addresses the brain directly. Researchers are also working on a gene therapy to regenerate the inner ear.

The most famous deaf person in history 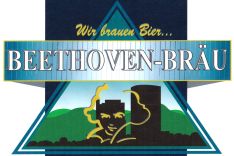 But these therapies were not available to Beethoven. He therefore had every reason to be grumpy, especially since deafness was by far not his only health problem. This frustration may also have accelerated his consumption of alcohol. Beethoven probably died of cirrhosis of the liver on March 26, 1827.

He died a world-famous man. While Mozart was buried unaccompanied in a mass grave, 20,000 people allegedly attended Beethoven's funeral. His fame increased over the years. To this day, he is probably one of the most famous artists in history; practically everyone knows his always grim-looking, iconic portraits, even if classical music is far from him or her.

Beethoven and the brands 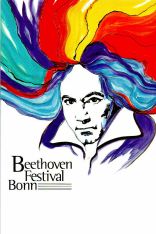 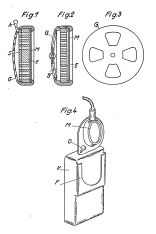 In short, no composer's name is used for as many trademarks as Beethoven's (except Mozart's; there are even more registrations). What would Beethoven, who was considered proud and self-confident, have said about this? And what would he have thought of this project planned for his anniversary year: the completion of his fragmentary 10th symphony by artificial intelligence? The premiere of this completion was postponed due to the pandemic.

Artificial compositions are nothing new in the patent literature; already in 1966 a "Device for composing musical motifs" (

DE1497840C)was applied for at the DPMA. Further patents followed, such as the "Verfahren und Vorrichtung zur Erzeugung einer polyhonen Melodie" (

Beethoven would certainly have appreciated a machine that would restore his hearing. He was also open to technical innovations, since he composed for Mälzer's "Panharmonicon" music automatons. But a computer that presumes to reach the godlike spark of his creative height? Hard to imagine that Beethoven would have accepted that. O Freunde, nicht diese Töne! (Oh friends, not these sounds!)