When the pictures started moving

Patent for the Lumière brothers' cinematograph

With this patent the success story of cinema began: on 13 February 1895, the brothers August and Louis Lumière applied for a patent in France for an "Appareil servant à l'obtention et à la vision des épreuves chrono-photographiques" (FR 245.032). Shortly afterwards, they also patented their "Apparatus for the production and demonstration of chrono-photographic images" in Germany (

US 579882). With the "Kinematograph" the photo had learned to walk; the moving image now conquered the world.

Like so many important inventions, the "Kinematograph" of the brothers from Lyon did not arise from a lonely flash of inspiration, but had various predecessors and technically rather offered a decisive improvement over the state of the art.

Dickson develops the first camera and player for Edison 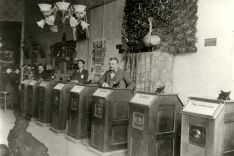 One of the first and probably most significant steps towards cinema had already been taken by William Kennedy Laurie Dickson in 1891. The engineer had developed the "Kinetograph" and the "Kinetoscope" for Thomas Alva Edison in Menlo Park (New Jersey), the first useful devices for recording and viewing moving images. Edison, at that time already a world-renowned inventor and successful businessman, recognized the potential of moving images and launched the Kinetograph worldwide.

The photographer Antoine Lumière, who together with his sons ran a factory for film material in Lyon-Montplaisir, saw Edison's peep-box in Paris in 1894. He brought his sons August and Louis the pattern of a celluloid film strip used in the kinetoscope and encouraged them to develop the idea further. 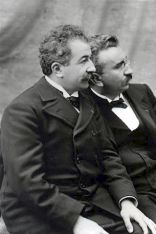 Louis Lumière had already developed a new photographic plate at the age of 17, whose high sensitivity enabled very short exposure times. These "Etiquette bleue" plates were a bestseller; in 1894 the Lumiéres produced 15 million plates per year.

In December 1894, a newspaper in Lyon reported that "the Lumière brothers are currently working on the construction of a new cinetograph no less remarkable than Edison's". 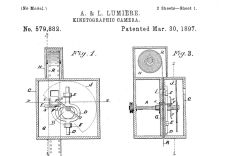 Details from the patent specification for Lumière's Kinematopgraph (from US 79882l)

Louis Lumiére and his engineers Charles Moisson and Jules Carpentier achieved some decisive improvements over Edison's apparatus: their cinematograph was both camera and projector. In contrast to the American peep-box, the Lumiéres' cinematograph relied on the projection of images, which could thus be shown to more than one person at a time (Dickson also wanted to develop the cinematograph in this direction, but quarrelled about this with Edison, who continued to rely on his peep-boxes; Dickson thus left the company).

An important new component of Lumière's apparatus was the intermittent gripper mechanism, which transported the perforated film in the manner of a sewing machine. 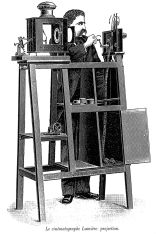 The Lumière's "Cinematograph" in action

After the patent application and some test performances, the "birth of cinema" took place on 28 December 1895: The legendary first public screening of the Lumiere brothers' films took place in the Salon "India" at the Grand Café in Paris in front of an audience of around 30 people. A number of short films were shown, including "Workers leave the Lumière factories". Another film snippet of an arriving train is said to have caused the audience to panic for a short time.

Black Maria, the first film studio in the world

The first "real" films had already been made before at Edison. Dickson shot the first films in the specially built studio barrack "Black Maria" (for example a sneeze of his assistant Fred Ott) and sometimes stood in front of the camera himself ("Dickson greeting", 1891 - considered by some as the oldest film in the world). Edison showed these films in his own kinetoscope salons in the metropolises in his peep-boxes and underlaid them with the appropriate music by means of a phonograph.

But the bulky cameras of the Edison companies only allowed recordings in the studio, while the Lumières' apparatus was easily transportable. This was another technical advantage of the cinematograph, which together with professional marketing helped the French to establish themselves on the market. This is why the name Lumiére is still associated with the beginning of the cinematographic age today. 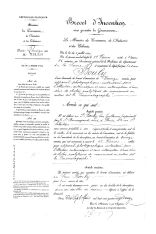 But besides Dickson and Edison, there were several other pioneers of cinema who invented cameras and projectors before or at the same time as the Lumiére brothers.
One example is the mysterious Léon Guillaume Bouly (1872 1932), who was the first to patent a "cinematograph" and coined the term. Three years before the Lumières, on 12 February 1892, Bouly had already applied for a patent for an "Appareil photographique instantané pour l'obtention automatique et sans interruption d'une série de clichés analytiques du mouvement ou autres dit le Cinématographe", i.e. an "instant camera for the automatic and uninterrupted acquisition of a series of analytical motion pictures, called cinematograph" (FR 219.350).

The following year, on 27 December 1893, Bouly, about whom little is otherwise known, applied for a new, improved "Cinématographe" patent (FR 235.109). However, he seems not to have paid the annual fee for the following year, so that his patent expired and the Lumiére brothers were able to occupy the term "cinématographe".

Time of the pioneers 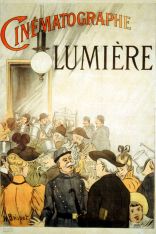 Other inventors who developed comparable devices in parallel were, for example, the Latham brothers (for whom Dickson worked after Edison; see e.g.

GB 189906793A) with their "Eidoloscope" in the USA or Max and Emil Skladanowsky in Berlin in 1895 with their "Bioscope" - to name only a few of the many early pioneers of film technology. The kinetoscopes for which patents were applied for, for example, by William C. Fanum from Arlington in 1894 (

US 571496), on the other hand, were almost technically obsolete at the time.

All of these devices were technically inferior to the Lumiére's cinematograph at that time, which is why their name is rightly associated today with the beginning of the age of cinema. Today, her films belong to the „

Memory of the World“ register of UNESCO.

In 1905, the Lumières gave up their commitment to cinema and sold their patents to the Pathé brothers, who became one of the first global players in the entertainment industry.