Examination with X-rays around 1906

A photo that changed the world

It all began on a late Friday evening in Würzburg, November 8, 1895, when Wilhelm Conrad Röntgen made one of the most famous discoveries in the history of science: an unknown, invisible form of radiation. These "X-rays", as he called them, not only revolutionized medical diagnostics, but also provided the impetus for further research, heralding the atomic age.

On that evening, Röntgen made a strange observation in his Würzburg laboratory (now a

memorial site ). How exactly this happened is not recorded; there were - as Röntgen later said - "no more servant spirits in the house". He experimented with electron beams in an empty glass container, a Hittorf tube (invented by the physicist Johann Wilhelm Hittorf). Using a fluorescent screen, he observed the electron currents inside the tube - and then apparently also outside. Röntgen noticed that even at a greater distance from the tube, the screen still lit up, even though electron beams in the air only reach a few centimeters.

"A new kind of rays" 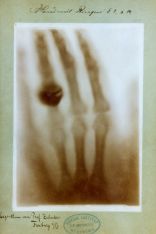 A picture that made history: Anna Röntgen's left hand

In contrast to other researchers such as Crookes, Hertz and Lenard, who may have produced this effect before him, Röntgen drew the right conclusions: it had to be "a new type of ray". This was the name of the groundbreaking publication in which he described his discovery on 28 December 1895. He called them "X-rays".

He may have discovered their most spectacular ability by chance, holding his hand between the tube and the screen and suddenly seeing his own bones. Because he also discovered that the X-rays blacken photo plates, he was able to prove their existence with a groundbreaking image: a photograph of the hand bones of his (still very much alive) wife Anna.

A picture goes around the world 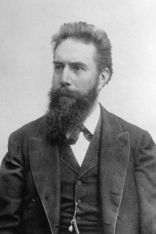 This first X-ray image ensured that news of his discovery spread around the world in no time at all. Never before had scientific knowledge spread so quickly and caused such a sensation. X-rays had laid the foundation for a revolutionary medical procedure that made it possible to diagnose the inside of the body without surgical intervention. He was showered with awards for this and received the first Nobel Prize in Physics in 1901.

His scientific career had a rather bumpy start: Röntgen, who was born 175 years ago on March 27, 1845 as the son of a cloth merchant in Remscheid-Lennep (in the

Haus am Gänsemarkt 1, next to what now is the

Deutschen Röntgen-Museum), was expelled from school in Utrecht without a degree. The Swiss Federal Polytechnic School in Zurich (ETH) accepted him nevertheless, because only the entrance examination counted there. He studied mechanical engineering and received his doctorate with a study on gases. After working in Würzburg, Strasbourg, Hohenheim and Giessen, he succeeded his former mentor August Kundt as professor of physics in Würzburg.

Surrender of a patent 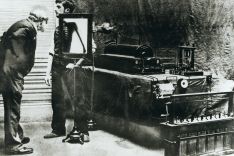 Röntgen was considered an introverted, reserved person and an idealist. He refrained from securing a patent for the generation of X-rays: Their use for the benefit of research and mankind should be free (financially he could afford it, as he had become a millionaire by inheritance). In the following years, researchers such as Henri Bequerel or Marie and Pierre Curie achieved groundbreaking results in radiation research; Leopold Freund and Georges Chicotot became pioneers in medical radiology and radiation therapy. Röntgen's successors became aware of the side efects of radiation exposure associated with the X-ray process and have since weighed up the benefits and risks of this imaging technique carefully.

The idea of not commercializing human diseases is also taken into account in the German Patent Act. For reasons of social ethics and health policy, patents are not granted for surgical, therapeutic and diagnostic procedures. Doctors should be free to choose any medical procedure so that they can always act for the benefit of the patient. This exclusion from patenting applies to procedures but not to products. For example, a novel X-ray apparatus may be patentable, but not a specific diagnostic method using the X-ray apparatus. 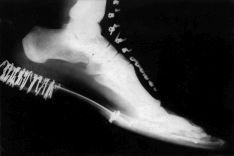 That Röntgen refused to patent his apparatus may have been noble-minded, but a patent might have helped him to ward off Philipp Lenard's accusation of intellectual theft. Lenard, who had also been awarded the Nobel Prize for his cathode radiation research in 1905, repeatedly claimed (especially after Röntgen's death) that the latter had either stolen his discovery completely from him or concealed his supposedly decisive preliminary work. Both accusations were groundless. Lenard, a convinced National Socialist and anti-Semite, also discredited himself professionally after 1933 as Hitler's court physicist and spokesman for "German Physics", which, out of ideological blindness, denied and negated essential findings of modern science (especially Einstein's works).

Röntgen did not have to experience this any more. In 1900 he moved to the Ludwig-Maximilians-Universität in Munich as director of the Institute of Physics. Among other things, he researched thermo- and electrodynamics and crystal physics. He rejected offers from industry to market the X-rays as well as the proffered title of nobility. He donated his Nobel Prize money to the University of Würzburg. When Röntgen died in Munich on February 10, 1923, he was a world-famous man.

The rays bear his name in German-speaking and Central and Eastern European countries, while elsewhere they are called "X-rays", as Röntgen himself had named them. In addition to medical diagnostics, X-rays are also used, for example, to carry out chemical analyses, to make different layers of a painting visible or to screen luggage at airports.

The use of X-rays in diagnostics is still being perfected today. For example, Godfrey Hounsfield's X-ray computer tomograph (CT) was an important milestone, for which he was awarded the Nobel Prize (1979), and is being continually optimized, as can be seen from current patents such as

DE02012202107B4. The X-ray microscope is also being continuously further developed, as can be seen from the patents