The tube under the Thames

It was the world's first underground transport tunnel: the Tower Subway. A rail car shuttled back and forth under the river between the banks of the Thames - a much admired technical innovation in 1870. Even though the narrow iron tube was only used for a few months, it set a milestone in the history of transport.

Seven years earlier, the Metropolitan Railway had opened, connecting Paddington and King's Cross stations with central London and leading through a brick tunnel. But the Tower Subway was the first purpose-built underground transportation tunnel and thus started a new era of the transportation.

The narrow tube of the Tower Subway was not the first tunnel under the Thames. Already in 1825, the construction works for the Thames Tunnel had been started, which finally opened in 1843 after endless difficulties. It connects the city districts Rotherhithe and Wapping and is approximately 10 metres wide and 366 metres long. This first tunnel under a river in the world was a sensation back then and a great visitor attraction, too.

Inspired by the shipworm 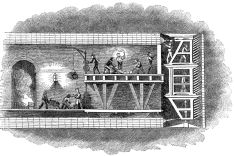 The engineer Marc Isambard Brunel (1769-1849), together with Thomas Cochrane, had developed a tunnel driving shield for this purpose. Cochrane, 10th Earl of Dundonald (1775-1860), was a legendary British naval hero. This makes the anecdote that the sailor should have been inspired by the shipworm sound quite plausible. This species of mussel (Teredo navalis) drills its shell upside down into the wood and has many a ship on its conscience. Brunel and Cochrane applied for a patent for their tunnelling shield in 1818 (GB 4204/1818).

This was a construction made of cast iron in which the miners could dig in separate chambers at the tunnel front. From time to time the shield was driven by a huge mechanism and the tunnel surface behind it was lined with bricks. The basic concept of the tunnelling shield still determines tunnel construction today.

The Brunels: pioneers of modern transportation 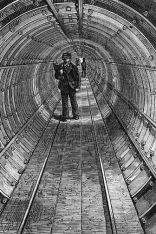 The Tower Subway tube as a pedestrian tunnel, 1870 (from "Illustrated London News")

Marc Brunel ruined his health with the Thames Tunnel. His son Isambard Kingdom (1806-1859) took over the management of the difficult pioneer project (and became an even more famous engineer than his father as a railway and ship designer). Originally planned for horse-drawn carriages, Thames Tunnel was first opened to pedestrians, and later to the trains of the London Underground, which still uses the historic tunnel today.

When the Tower Subway was tendered for construction in 1863, engineer James Henry Greathead took up the concept of the tunnelling shield and improved it (GB 1738/1874). This enabled the second tunnel under the Thames to be completed much faster and more cheaply than the first. 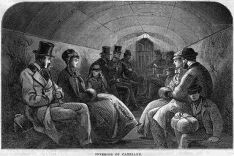 The Tower Subway was opened on August 2, 1870. The tube has a length of about 400 and a diameter of about 2 meters. It lies safely 6-7 meters below the river bed, thus avoiding the water ingress that had made the first tunnel construction so complicated.

Inside the narrow metal tube, an eight-wheeled rail car shuttled back and forth between the two termini. It could carry twelve people and was pulled through the tube on a steel cable (similar to a funicular), driven by two steam engines with a capacity of 4 hp. The journey through the tunnel took about 70 seconds.

The passage on the first underground train cost one penny (tuppence for first class passengers, although they were all on the same trolley!) But the operators never got their money's worth. Only a few months after the opening, on 7 December 1870, the rail car services were closed down. 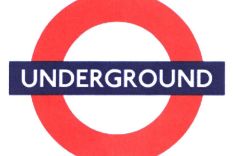 Now the tunnel received artificial lighting and was opened to pedestrian traffic on Christmas Eve 1870. Access to the tunnel was via a spiral staircase on both banks of the Thames. From then on, an average of 20,000 passers-by a week used the tunnel, each paying half a penny.

When the Tower Bridge built over the tunnel was opened in September 1894, soon hardly anyone used the dark, narrow pedestrian tube. It was closed in 1898. Later on, water pipes and telecommunication cables were laid there. 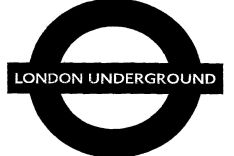 The real triumph of the underground railway only began with the development of electronically driven trains. The most important pioneer was Werner Siemens, who presented an electric locomotive at the 1879 Berlin Trade Exhibition. In 1881, he opened the world's first electric tram in Berlin-Lichterfelde (see

First electric tram (1,78 MB) and DPMA poster gallery "Milestones in the history of technology"). However, an electric railway network was not established in Berlin for years. The British, on the other hand, did not hesitate: In 1890, the first underground railway in London was operated with electric locomotives from Mather & Platt of Manchester. The largest underground network in the world quickly grew in the British capital. It was only recently that the networks of Shanghai and Beijing overtook it in their extension.

It goes without saying that the technology surrounding trains and tunnels is constantly being advanced. Today, new focal points are being added that nobody would have thought of in 1870, such as "Device for disinfecting the air in underground railway carriages" (

The "Tube", as Londoners affectionately call their Underground, has grown to 270 stations and 11 lines extending deep into the suburbs of the British capital. As the oldest and for a long time largest underground in the world, the London "Tube" enjoys great popularity. It is therefore not surprising that Transport for London have secured various trademark rights around "London Underground", for example EM014360986 or EM011196532.