Dr Nancy Grace Roman paved the way for women in space travel: She was NASA’s first Chief of Astronomy and thus the first woman to hold an executive position.

Born in Nashville in 1925, she started an astronomy club as a child. Even at school it was clear to her that the stars were her goal, so she was very interested in mathematics. “I still remember asking my high school teacher if I could take a second year of algebra instead of a fifth year of Latin,” she recalled. “She looked down at me and asked: What kind of lady would take mathematics instead of Latin? That was the sort of reception I got most of the way,” recalled Roman later. 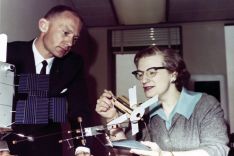 She did not let herself be put off, consistently followed her path (although she was also told at university that she should “just go off and get married”) and earned her PhD in astronomy at the University of Chicago in 1949. Then she did research at an observatory and a radio astronomy laboratory, taught at the university and published influential scientific papers.

She showed astronauts the way to the stars 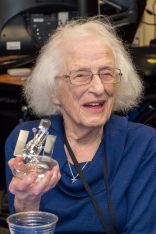 When, in 1958, an acquaintance asked her if she knew anybody interested in setting up a space astronomy division at the recently formed NASA, she applied for the job on the spur of the moment and became Chief of Astronomy and Relativity Programs. Actually, she was the first woman to hold an executive position at NASA.

Under her direction the Orbiting Solar Observatory 1 was developed and, in March 1962, launched into space. The Orbiting Astronomical Observatory 3 as well as the International Ultraviolet Explorer and the Infrared Astronomical Satellite also resulted from her programme, as did research balloons, sounding rockets and a total of 20 satellites. In addition, she prepared astronauts for the astronomical challenges during their mission in space, including the crew of Apollo 11 and all three Skylab crews. 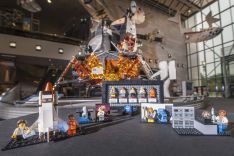 The Lego special set “Women of NASA” at the National Air and Space Museum in Washington DC. The figure depicting Nancy Roman is in the centre.

However, her most important mission was her work for a major observatory in space. In 1990, her decades of work finally got the Hubble Space Telescope into orbit, which is considered the most significant advance in astronomy since Galileo’s first telescope 400 years earlier.
In 2017, a toy figure of the Lego special set “Women of NASA” was dedicated to Nancy Roman; the other figures to Margaret Hamilton, Katherine Johnson and astronauts Sally Ride und Mae Jemison.

She was one of the first women in an executive position at a time when science was regarded as a male-dominated world. Throughout her life, she was an advocate for women in science. She died at the end of 2018.