She brought the men on the Moon back to Earth

A lunar crater is named after Frances Northcutt – or rather after her nickname “Poppy”. Northcutt (born in 1943) was the first female engineer to have worked in NASA’s Mission Control. Back then, one could only see men in the mission control centre in Houston, in which she had worked since the Apollo 8 mission, so the young woman created a great sensation among the public.

“The mere fact that a lot of women found out for the first time that there was a woman in Mission Control was a very big deal. I thought it was important that people understand that women can do these jobs — going into science, going into technology. Doing something that's not stereotypical,” Northcutt remembered later.

After Apollo 8’s orbit around the Moon in 1968, a reporter asked the then 25-year-old Northcutt whether it was daunting to work in such a male-dominated environment. “In fact, this environment is rather dominated by machines,” she replied dryly. 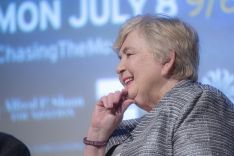 Northcutt later stated that the most exciting moment of her career in the field of aeronautics was not the Moon landing but Apollo 8’s first orbit around it: waiting for a response from the spaceship in the radio shadow on the far side of the Moon. At the time, contact was made a few anxious seconds later than planned. A minimal delay during the thrust’s ignition could have propelled Apollo 8 into the far reaches of outer space instead of back home. “No one in the room is breathing,” she later remembers, “no heart is beating”.

Just like other women from the Apollo mission, she had first started off as a computress, in other words a mathematician. Her employer had been TRW, a company that provided systems engineering to NASA. After that, however, she was promoted to a team for planning and analysis which simulated abort scenarios for flights to the Moon and was particularly responsible for the return flights of the spaceships known as “re-entry”. She thus followed the Moon landing of Apollo 11 on TV at home and then went to sleep – her moment came later with the beginning of the return flight.

The rescue of Apollo 13 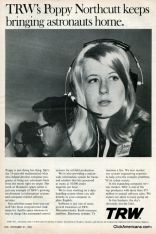 For instance, Northcutt and her colleagues simulated several scenarios in the event that more fuel should be consumed during the flight around the Moon than initially anticipated. This foresight later saved the lives of the astronauts of Apollo 13. When the oxygen tank exploded on the way to the Moon, Northcutt and the other engineers, who had developed the computer programme for the return flight of Apollo 13, were immediately called to the mission control centre to perform all the necessary calculations for the spaceship’s rescue.

In the end, Apollo 13 was able to make its way back to Earth safely thanks to the propulsion system of its lunar module (had the disaster occurred on the return flight, a rescue would not have been possible). Northcutt and the “Mission Operations Team” received the Presidential Medal of Freedom for their rescue operation. 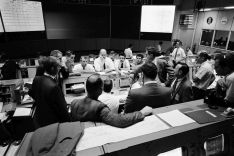 View of the mission control centre of the Apollo 13 mission, which was teetering on the brink of disaster

“I became more conscious partly because of the attention I was getting as the first and only woman in my role in the mission control centre,” she says. “It increased my awareness of how limited women’s opportunities were. It was almost 1970, we’re at the brink of going to the Moon, and we still don’t have more women? I should have been the 100th.” At the same time, as she remembers today, she was “scared to ruin it for everyone else”.

Apollo 17, the final mission to the Moon, landed right beside the crater called “Poppy”. After that, Northcutt left the field of aeronautics and started working as a women’s representative in Houston. Additionally, she studied law in order to be able to fight even better for gender equality. To this day, Frances Northcutt has been an active fighter for women’s rights.